Don’t Bring A Knife To A Gunfight

Since the early 1980s, a popular approach to asset allocation has been to put 60% into stocks and 40% into bonds. This “60/40” playbook worked well for three reasons. First, the “40” was supported by falling interest rates, which caused bond prices to rise. A simple index fund was all that was needed to generate good income and still sleep well at night.

Second, the “60” was fueled by strong economic growth, which propelled stock prices higher. Third, there were noticeable diversification benefits between stocks and bonds during most phases of the economic cycle, which often created a smoother ride.

However, the 60/40 playbook is a simple solution for simpler times, and there are five long-term challenges facing investors that warrant a more sophisticated approach.

We Are Living Longer

The chart below shows the rise in life expectancy for men and women since the 1950s due to advances in medicine, healthier lifestyles, and education. 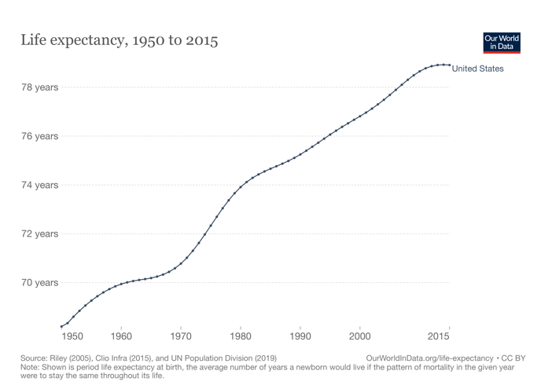 According to the Centers for Disease Control and Prevention (CDC), the average U.S. life expectancy rose for the last five consecutive years1. As of 2019, the average life expectancy for women was 81.4 years. For men, it was 76.3. Furthermore, American men who reach age 65 will live another 17.8 years on average, while women will live 20.3 years, and 47% of couples will have a spouse live past 901.

Although this is a good trend, it represents a challenge for the first wave of retirees who are now subjected to the “do-it-yourself” world of 401(k)s and IRAs. They are being forced to do what pension managers did for their parents, which was to ensure they did not outlive their nest egg. That’s going to become progressively harder to do as we live longer.

Inflation Is Not All Transitory

Over the past year, consumer prices rose 5.3%(the fastest pace in 13 years)3. Core inflation, the less cyclical measure that excludes food and energy, came in at 4.5% (the fastest in 30 years)3.

The Federal Reserve (Fed) has publicly stated that rising prices is an immaterial and “transitory” byproduct of the economy turning back on, and there’s some merit to this stance. But the staggering 32% rise in the money supply since pre-COVID4 can only be transitory if all this money sloshing around gets mopped up first (an outcome that virtually nobody expects).

Therefore, we expect higher inflation than what we’ve seen in the last decade, which could very well wreak havoc on investors who have not revised their approach to fixed income and cash investments.

Large swaths of the bond market are also sitting ducks for higher interest rates. Although not an imminent risk, we haven’t seen an extended period of rising rates since the 1950s. It’s a foreign concept to most of us, but the last row in the table below shows that it might not be pretty. 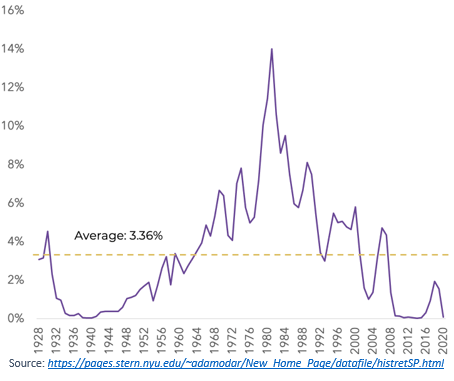 Even if rates stay low for the next decade or two, that’s still 40% of a portfolio invested in dead money (unless the Fed were to send rates negative). Either way, investors risk attaching a big anchor to their portfolios.

But the solution isn’t as easy as selling all bonds. In fact, this could cause more problems than it solves. As the saying goes, a bad day in stocks is a bad year in bonds. Most investors own bonds for income and diversification, and just because broad sectors are trading at a premium does not imply the entire bond market is doomed. Instead, it suggests taking a more active approach using fewer constraints and partnering with managers skilled at navigating the risks that lie ahead.

The chart below depicts the yield on 3-month Treasury bills, which is a proxy for cash investments and supports two painful truths. First, cash has earned virtually no return for almost 12 years.

Second, the dotted line represents the average yield over this period at 3.36%. What is less obvious is that it took 34 years to get back to this long-term average after the Great Depression (the last time rates were cut to zero). If history does repeat itself, we could be down here for a while.

The Fed has even gone so far as to warn investors to prepare for this possibility. Their forward guidance indicates very little chance that monetary policy will shift dramatically anytime soon. Even if they were to change their minds, the mechanics of reversing course are prohibitively slow.

Bank deposit rates are based on supply and demand, and since the Fed flooded banks with so much cash last year, the U.S. banking system has a staggering $2.7 trillion in excess reserves8. This is cash in vaults that banks don’t really need and will likely act as an anchor on deposit rates.

Money market funds and other cash investments typically respond quicker to interest rate hikes, but another big hurdle remains. After the financial crisis, these funds reduced fees to ensure that investors did not lose money in an era of rock-bottom interest rates. Now, when rates rise, so do fees (usually). Hence, the net return probably will not change much even if yields on these funds move higher.

The Volatility Index (VIX) is computed by the Chicago Board of Options Exchange. This gauge is the de facto standard for measuring and tracking equity market volatility, and many consider it to be the “fear gauge” for stocks. Currently, the VIX is sitting just below its long-term average5.

Low volatility being a hurdle for investors may seem counterintuitive, but the VIX is a “mean-reverting” index. Meaning, when it is below its long-term average, it tends to rise to that average. Volatility also acts like a compressed spring, where the farther down it goes and the longer it stays there, the more violent the release.

Furthermore, because bonds and cash are being so heavily manipulated by the Fed, a lot of investors own stocks today because they have no other choice. There’s nowhere else to go to find a return that can beat inflation while still preserving liquidity. That probably means a lot of people who own stocks right now don’t have the stomach for them. If so, this creates a powder keg scenario, where even the slightest bad news could cause an extreme reaction.

To be clear, volatility poses little risk to long term investors. Volatility is a measure of short-term movements in markets, and since these are fueled more on emotion than fundamentals, then by association volatility is just a measure of emotion. Most emotions are fleeting and don’t drive economies, so their impact is temporary.

The real risk with volatility is how investors react to it. Major swings in stock prices can cause investors to lose sleep, or even worse, sell into panic. Hence, although volatility is not risk, it’s not something that should be completely ignored either. The challenge is managing this type of volatility without knowing when it will arrive.

Do not interpret these challenges as support for a bearish stance on the future for investment returns, because nothing could be further from the truth. The world is changing in ways that we are just beginning to understand, and this is creating one of the most exciting opportunities for long term investors in modern history.

The innovation driving this evolution is also strong enough to endure a downturn or two along the way. Take last year. The government-mandated shutdown of our economy did little to impede the brilliant scientists around Boston curing cancer. Nor did it slow down the breakthroughs in Silicon Valley.

However, these five hurdles are making it harder to position for what could come. Complex markets call for more sophisticated solutions, and using an antiquated playbook designed for simpler times is like bringing a knife to a gun fight.

Think about what it took to fix a car in the 1980s versus today. Back then, a wrench and a basic understanding of an engine could fix most problems. Today, consumers practically need an engineering degree to fill tires with air. The sophistication has turned cars into computers on wheels, but is this a bad thing?

Cars today are safer, run on less fuel, have cameras to protect bumpers and pedestrians, and do other amazing things like parallel park themselves. Sure, wrenches have been replaced with trained mechanics, but that is the tradeoff for the benefits that came with advancement.

Our current playbook is based on three overarching themes. First, broaden diversification to manage volatility and the changing relationship between stocks and bonds. Second, utilize quantitative tools and other technologies to move quickly and decisively when opportunity presents itself. Third, stray from the herd and fish in ponds where others are less equipped.

The bottom line is that financial markets evolve over time, and the biggest risk to achieving financial goals is to refuse to adapt with them. It’s time to join this evolution and leave the knife at home.