Don’t Let Them Get Inside Your Head

The chart below is from an article that compares the difference between causes of death in the U.S. to what is most reported in the news1. It’s meant to question whether there is a disconnect between what we see in the news and what is reality. Since most of us want to stay alive, a good litmus test would be to see if the media covers subjects that might help us avoid death. 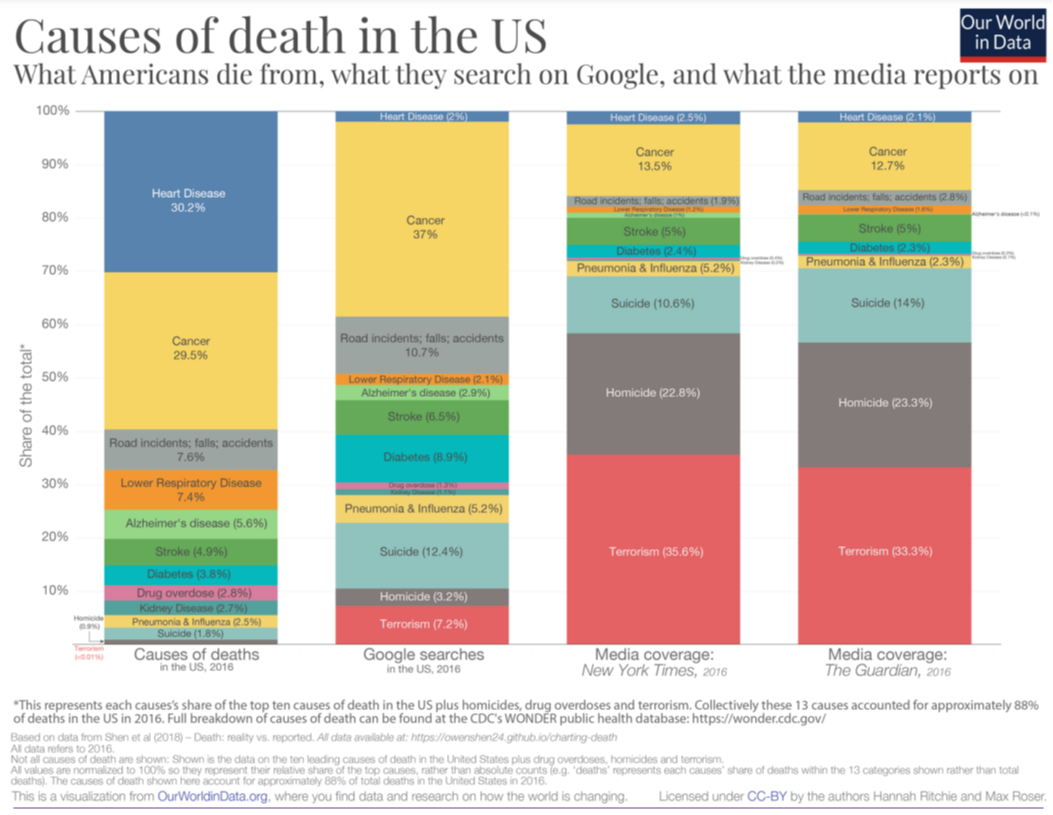 While there are several observations, two stand out:

To understand why the media appears to be focused elsewhere, let’s analyze their incentives.

One of the most fundamental economic principles is that we are all self-interested. We operate our lives and base our decisions on what will best serve us and the people we love. Recognizing this principle is critical to understanding the motivations behind decisions made by people and corporations.

Within this context, the media represents a group of for-profit institutions that are in business to make money. The bulk of their revenues come from advertising, so they are highly incentivized to attract as many eyeballs and website clicks as possible.

More viewers translate to more advertising dollars, so they need to keep their audience hooked to prevent them from changing the channel. That’s why terrorist attacks get more airtime than heart disease. There are just not enough twists and turns to keep people tuned in when compared to the aftermath of a suicide bomber. Producers at large media companies are not clueless to our bias for single events, so they can use this to create narratives that keep viewers hooked to drive advertising dollars.

Reading this article reminded me of a flight back in 2014 that encountered severe turbulence on descent to LaGuardia Airport. Windy days there are more the norm than the exception, but as the plane made its way to the gate, I noticed that the woman next to me was in tears and shaking uncontrollably. After she calmed down a bit, we began talking, and I came to learn that she was just a nervous flyer.

This passenger even admitted to knowing the statistics around flying. She understood the odds of bad things happening were infinitesimally small, but the data provided no comfort because of what she had been watching on the news that week.

A few days prior, Malaysian Airlines Flight 370 disappeared over the Indian Ocean2. She had felt so badly for those families that her own kids were the only thing on her mind as we were landing. My first thought was how irrational it was for her to panic simply because of what she had been watching on the news. But it didn’t take long to feel like a hypocrite once I remembered that my longstanding refusal to swim in the ocean was set in stone after watching Jaws as a kid.

Humans are emotional creatures, and no matter how hard we may try at times, feelings get the best of us. It is why airline revenues drop precipitously after plane crashes and movie theaters have so many empty seats following terrorist attacks. Despite these events being incredibly rare, their impact can cause extreme responses.

Few areas of our lives are impacted more by emotions than our wallets. A prime example is the fallout from Bernie Madoff, who ran the largest Ponzi scheme in history. His clients were primarily institutions, celebrities, and wealthy families. Most Americans likely didn’t even know his name prior to the media coverage, but the size of the fraud and the airtime it received caused extreme panic.

According to researchers at Cornell University, the aftershock of Madoff's crimes caused $363 billion in withdrawals from investment funds unrelated to him. The withdrawals were so hefty that some investment firms went out of business3.

This happened despite the actual impact to most investors and financial markets being immaterial. He stole a few billion from the $40 trillion in investable assets in the U.S.4, which is practically a rounding error. Most of his investors even recovered sizeable portions of their original investment3.

The irony is that while these investors sought safety and security, many of them probably missed out on the early innings of what became one of the best decades for equities in history.

Evidence clearly suggests that events covered closely by the media can cause outsized responses, but ignoring these over-hyped stories is not the answer. Madoff forced investors to do better due diligence on advisors, and terrorists taught law enforcement the need for barriers around government buildings. It’s hard to argue these are not improvements from prior policies and procedures.

Like most things in life, measured responses tend to be best. The challenge is that to do so requires separating logic from emotion, which is far easier said than done. One effective tactic is to talk to a confidant who is not afraid to challenge you. The process of articulating feelings can often be enough to bring us back on the rails. It’s also better to have a close friend think you are overreacting versus risking your financial future. This is also why a nest egg should be managed by a team rather than just one person.

The bottom line is that the real risk in media hype tends to be the reaction to the event rather than the event itself. Emotions are viruses that infect investment strategies, so keep a cool head the next time some crook steals money or your favored presidential candidate loses.

3 “The Future of Wealth in The United States” – Deloitte Consulting, 2015