Markets calmed down somewhat during the second quarter, but that doesn’t imply smooth sailing from here. If anything, less drama has opened the door to fiery debates on the direction of the economy and financial markets.

The bears point to monetary policies that are creating runaway inflation and artificially fueling valuations of everything from stocks to cryptocurrencies. It’s only a matter of time before this house of cards falls.

But the bulls argue that this is just the beginning. Repeated all-time highs in the stock market and strong corporate earnings suggest that we are entering one of the greatest bull markets in history. Who will be right?

Inflation is too much money chasing too few goods, and there’s a goldilocks level where just the right amount is needed for a growing economy. But when inflation spikes, investors, politicians, and most Americans that lived through the 1970s begin to panic.

That’s pretty much what happened over the last year, as consumer prices rose over 5.3%(the fastest pace in 13 years)1. Core inflation, the less cyclical measure that excludes food and energy, came in at 4.5% (the fastest in 30 years)1. These numbers have fueled a vigorous debate as to how long inflation will stick around.

The Federal Reserve (Fed) has publicly stated that rising prices is an immaterial and “transitory” byproduct of the economy turning back on. They argue that the headline numbers aren’t telling the whole story. For example, over 50% of the inflation reported in April came from used cars, hotels, and rental cars (despite these three representing 5% of the total basket used to calculate the headline inflation rate)1.

The other side of the debate prophesizes 1970’s style inflation. They point to the staggering 32% rise in the money supply since pre-COVID2 and argue that inflation can only be transitory if all this money sloshing around gets mopped up first (an outcome that virtually nobody expects).

We remain somewhere in the middle of this debate. Money printing is not transitory. It just isn’t, but a lot of the inflation today is probably not going to last either. Once the government stops paying people to not work and supply chain issues get resolved, we expect inflation to settle into an average of 2.5% - 3.5% over the next few years. That’s higher than the last decade but nowhere close to the days of disco balls.

Rising prices became the hot button issue of 2021 because some believe that inflation will force the Fed to raise interest rates sooner than expected. But we firmly believe that the odds of any change to monetary policy are incredibly low. The only view on inflation that matters to the future direction of interest rates is the Fed’s because they set the rules. So, if Jay Powell and company believe inflation is transitory, that’s that. As the old adage goes, “Don’t fight the Fed.”

But even if the Fed were to reverse course tomorrow, we are still years away from any economic impact. To start, the Fed has to unwind policies they’ve had in place for the last 15 months to keep interest rates this low. That’s not like flipping a light switch.

Only after this process is well underway will the Fed raise their target interest rate, and when they do, it’s almost certainly going to be small – no more than 25 basis points (0.25%). Since it takes about a year for an interest rate hike to work its way through the economy (due to its size), we are likely years away from feeling any economic impact due to a change in Fed policy.

Simply put, it’s going to take a lot more than a single interest rate hike to slow down what could end up being one of the greatest economic expansions in generations. While debates like these will most likely continue, they should have little impact on the fundamental direction of the economy.

In the equity market, three debates remain center stage. First, the rise of retail trading in meme stocks like GameStop and AMC have led many pundits to proclaim a new world order. But despite the media attention and the occasional hedge fund blow up, these are microscopic and isolated events that will have virtually zero impact on the broader equity market.

Second, the S&P 500 continues to break all-time highs, and it’s doing so with relatively low volatility (per the chart below). Bears view this as a warning – get out now and let the market cool a bit. Stocks can’t keep going up like this forever when valuations are at these levels. 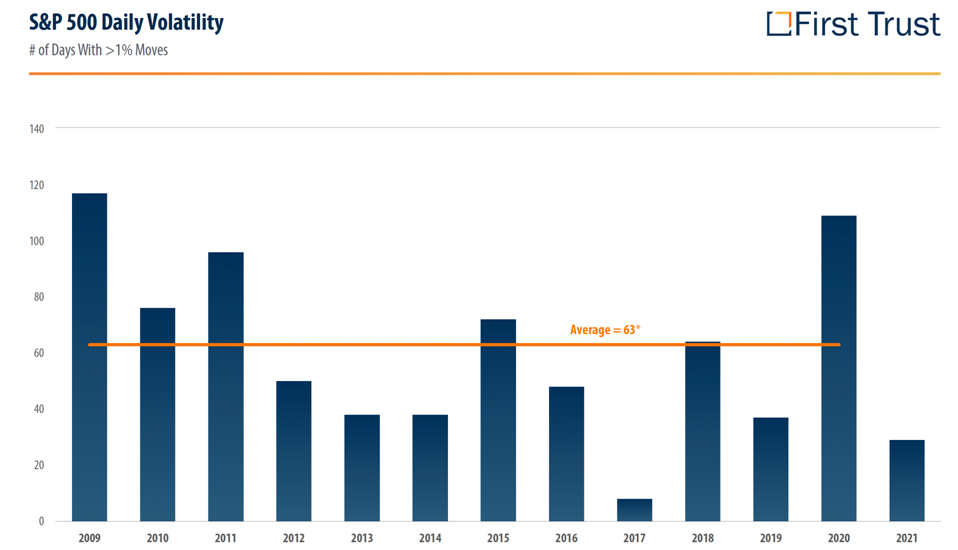 In regard to valuations, comparing the today to any other time in history is practically pointless because there hasn’t been anything like what we’re experiencing right now. If anything, low interest rates, the need for protection against higher inflation, and the lack of alternatives to the expected return in equities further strengthens our conviction that stocks remain undervalued, not overvalued, and that we still appear to be in the early innings of this bull market. 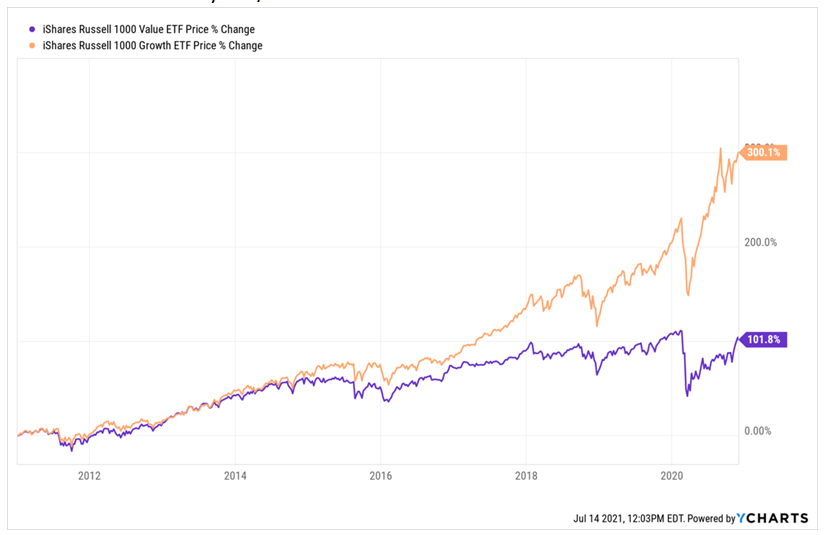 Then came the vaccine announcement, which ignited a violent reversal of this trend. Stocks that had languished for most of 2020 over legitimate fears that many companies would not survive staged a meteoric comeback. Traders added gasoline to the fire by selling big tech and other growth stocks and using proceeds to buy stocks in financial services, energy, and other subsectors of the economy that were trading at lower multiples.

But we avoided this trade for three reasons. First, we viewed this rotation as more of a “junk rally” rather than a true value stock resurgence. The stocks that soared the highest were the ones with questionable business models, and we aim to avoid stocks that look cheap for a reason (“value traps”). Second, we felt that timing this trade created more risk than doing nothing at all (not to mention tax implications). Third, we don’t view ourselves as either value investors or growth investors. We are just investors. Before this growth vs. value debate even began, we already owned what we viewed as high-quality growth and value stocks, so there was no obvious reason to make adjustments.

Moving on to bonds, despite the relatively wild ride investors have faced this year, the bond market appears to be doing what it usually does – trading based on future expectations of inflation and interest rates. Traders panicked over both of these for most of the first half of the year, but these concerns appeared to start waning late in the second quarter.

Overall, our views on bonds remain unchanged. It’s a challenged asset class that poses risk to those investors who continue to use old playbooks and refuse to adapt. To counter these risks, we remain active and unconstrained and leverage relationships with managers who have demonstrated success in niche corners of the bond market.

Lastly, there’s an old saying in the commodities market that the cure for high prices is high prices. Meaning, prices can only rise so high until buyers stop buying. This “demand destruction” may very well be happening as we speak.

For example, lumber became the poster child for runaway inflation back in April. Lumber prices quadrupled in a year, which led to rampant hoarding unseen since the great toilet paper run of 2020. However, lumber has fallen over 50% since its all-time high back in May, and several other commodities have followed suit. This volatility should act as a stern reminder to investors why commodities are best kept to a relatively small portion of a portfolio.

If it feels like the first half of the year fueled healthy debates, then get ready for what’s on deck. There are three big ones already brewing that could dominate investment committees and client conversations.

The first is when and how the Fed will remove the crutches that are currently supporting the economy. The Fed has been buying $120 billion in Treasury bonds and mortgages every month since March 2020 (“Quantitative Easing”), and they will likely announce plans to taper this buying in the second half of 2021. When crutches are removed, things are wobbly for a while. They were when the Fed removed crutches after the financial crisis, and this time probably won’t be much different. Will investors mistake wobbly for weakness, or will the “buy the dip” mentality continue?

The second will be what, if anything, comes out of Congress. While many investors feared the “blue wave” back in January, we were skeptical that the Democrats would pass any major legislation during the first half of the year. Now that we are only 18 months out from midterm elections, are the moderate Democrats willing to risk their jobs to support President Biden’s agenda?

The third is an oldie but a goodie – the battle between active and passive investing. For years, passive investors had an almost religious dedication to cheap index funds that track popular indices, and it often worked well. But now that stocks are moving less in sync and the broader bond market looks as challenged as ever, will this cohort favor a more active approach?

Carl Richards once said, “Risk is what’s left when you think you’ve thought of everything”3.  These debates clearly don’t encompass all issues facing investors, but it’s a start. And while we may disagree with consensus on many of them, we still listen because, to Mr. Richard’s point, this is where risk lies (we prefer to manage risk than take too much of it).

The bottom line is that despite so much controversy, we see little reason to materially adjust our expectations. But these debates along with the ones nobody is thinking about just yet could change that. Thank you for your continued support, and all the best through 2021 and beyond.