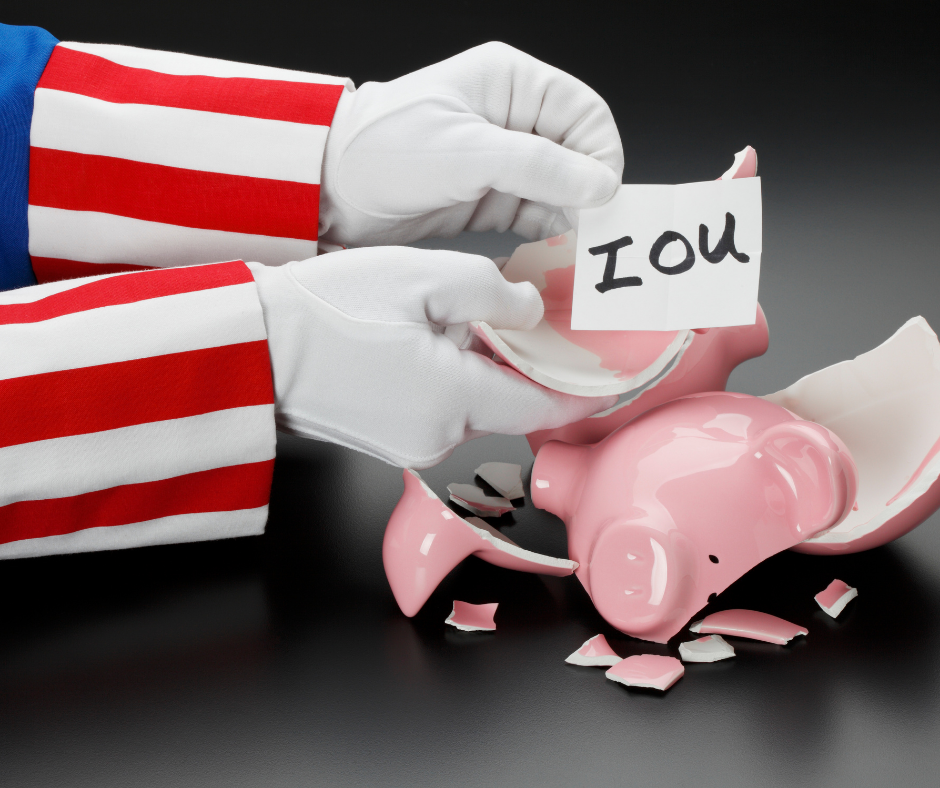 How Will We Pay It All Back?

The chart below depicts the jaw-dropping rise in U.S. government debt since 2000. We have become so accustomed to debt levels in the trillions that new issuances barely raise eyebrows anymore. 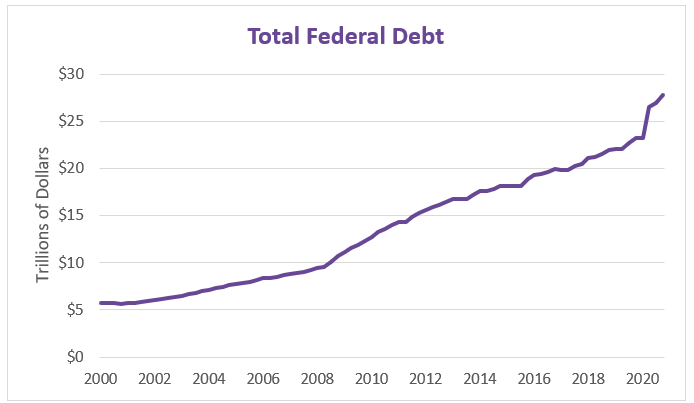 It’s almost impossible to contextualize numbers this large, but perhaps this example can help. If you had a job that paid $1 every second, you would earn $1 million by lunchtime on the 11th day, but it would take you 31,700 years to accumulate $1 trillion. Prior to the CARES Act last year, numbers this big had been mostly reserved for astronomers to measure distances between stars. Today, they are the push of a button from the government.

But not all investors are ignoring the direction the government is taking, and they are asking how can we possibly pay it all back. But before we address this very relevant question, let’s first gain a clearer picture of how government debt works and its implications on the economy over time.

The first rule of debt analysis is that the total amount of debt, on its own, is meaningless. Some of the most successful companies in the world carry billions in debt, and they have operated for decades with little risk of default. That’s why debt must always be put into context using relative measures.

Unfortunately, the debt-to-GDP ratio has become the de facto measure for pundits and fearmongers. It compares the total debt for a country to its annual gross domestic product. The debt-to-GDP ratio for the U.S. remained around 100% for most of the past decade until last year when it surged to over 130% due to the debt created to fund the stimulus bills. The additional government spending coming our way should push this ratio even higher.

Pundits like to stoke fears of runaway debt anytime this ratio exceeds 100%, as if it is some trigger switch that begins a death spiral for an economy. However, it offers little insight because debt is an amount accumulated over several years, whereas GDP is a flow of economic activity measured annually. Since the total amount of debt does not have to be repaid in a year, it would be like criticizing a homeowner for not being able to pay off a 30-year mortgage with a single year of income.

Several countries have debt-to-GDP ratios that exceed 100% and are doing fine. The U.K. has been above 100% for 90 of the last 180 years, and Japan has had one of the highest ratios in the world for decades (currently above 250%)1. On the other hand, Russia has one of the lowest ratios despite a questionable outlook1.

The primary goal of debt analysis is to determine if the borrower can afford the debt. For example, if two neighbors have the same $1 million mortgage, but one makes $500,000 a year and the other $50,000, then the neighbor with the higher income should have an easier time making the payments.

Within this context, the U.S. can easily afford its interest payments on outstanding debt. The chart below compares the amount of interest owed against the country’s GDP. This analysis is like what a bank does when a buyer applies for a mortgage. They compare the monthly mortgage payment against  the buyer’s monthly salary (technically GDP is not actual income but it’s representative of a flow so it should suffice for this analysis). Despite the surge in debt creation, the interest paid relative to GDP over the last decade is half of what it was back in the 1990s. 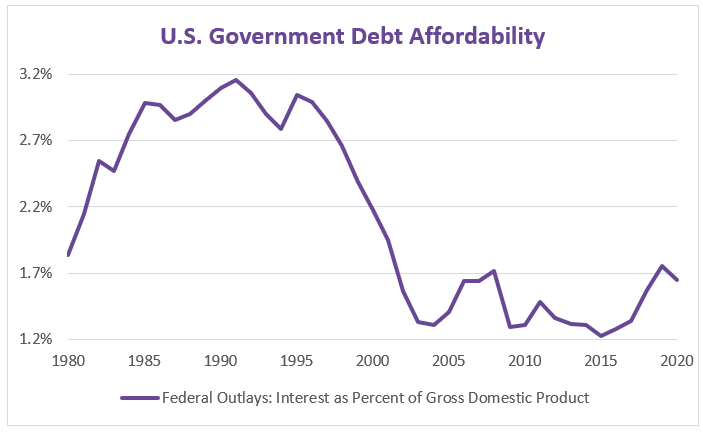 For scale, Italy and Portugal both exceed 5% but remain operational1. The U.S. would need to more than triple its interest payments while keeping GDP stagnant to come close to this level. Given where we are in the economic cycle and the incredible amount of government spending in queue, this risk seems low.

We Can Kick The Can

The U.S. pays back billions in principal to retire old debt every year. The Treasury does this by issuing new debt to pay the old debt. This process is called “rolling” debt and is a common practice by governments and corporations.

Rolling debt can last for as long as demand exists to buy the new debt. But if demand for U.S. debt were to vanish for some reason, the government could just “print” new money to pay back the principal it owes. This practice is called “monetizing” debt, and although it would be a widely unpopular with foreign debt holders, there is little they could do to stop it.

It also helps that the U.S. dollar is the world’s reserve currency. It’s used in around 80% of world trade, and it took decades to attain this level of trust. It’s hard to imagine the U.S. could print enough to erode this confidence anytime soon.

Said another way, the U.S. can comfortably kick the can down the road for a lot longer than any realistic investment horizon.

Back in 2010, a sensational television ad prophesized a day in the future where the U.S. would be at China’s mercy because they owned so much of our debt2.  But there’s just one tiny little issue here - China owns very little of total U.S. debt. In fact, the chart below breaks down the owners of all U.S. debt, and China only owns about 4%. 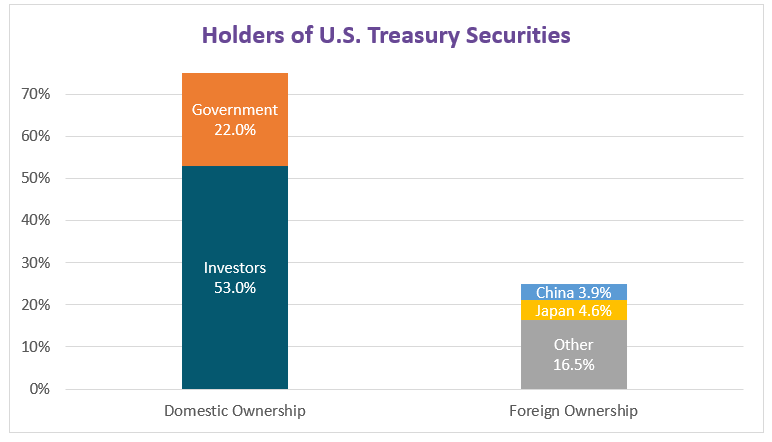 In fact, add up all foreign ownership and it’s barely 25% of the debt. That means the other 75% is owned by the U.S. government and domestic investors. So, when the U.S. is paying interest, 75 cents of every dollar is going back to the government and American corporations and citizens.

But even if China owned 80% of our debt, it’s not collateralized like personal and corporate debt. It’s only backed by the full faith of the U.S. Government. That’s nothing more than a promise to pay it back. Meaning, if the U.S. were to default for some reason, it’s not like China could sail a barge up the Jersey Shore and seize the Statue of Liberty. There is no foreclosure here like there is with a house.

Simply put, China or any other country’s share of U.S. debt gives them no leverage whatsoever to shape our policies and/or way of life.

Let’s assume that the U.S. paid back all of its debt and subsequently eradicated the supply of Treasury bonds. While this may sound like a utopian paradise to some, Treasuries are the backbone of the bond market. If there was no basis to price mortgages and car loans, the ramifications could be significant.

Furthermore, one person’s debt is another’s asset. Buying a house creates a liability for the homeowner, but it also creates a source of profit for the lender. What would retirees do if they lost access to risk-free investments that paid guaranteed income? How would it change a pension fund’s ability to meet liabilities 30 years from today if they did not have access to risk-free, long-term government debt?

Although hard to predict, it is conceivable that paying off all the debt could very well make the cure worse than the disease.

Imagine Bill Gates wakes up tomorrow, buys a $500,000 Lamborghini, and drives it into Lake Washington. He has so much fun doing this that he decides to do it every day for the next 30 years. Would most people view this as stupid and wasteful? Probably, but a better question to ask is if he can afford to do so. Here, the answer is an unequivocal “yes.”

This is precisely how I view the fiscal stupidity exhibited by both Democrats and Republicans since 2000. The amount of money both parties have set on fire is simply staggering, but the reality is that our country can afford to do it. We are not Greece or Argentina. It’s not even close.

Therefore, if you’re upset with all the spending, channel your anger/desire for change in ways that won’t risk your financial future. Get out and vote, protest, or run for office if you have the stomach for it (I don’t).

Lastly, let’s address the original question of how we will pay all of this off. The short answer is we won’t. Governments don’t pay off debt. But strong economies can grow their way out of debt burdens by increasing GDP faster than new debt creation. That’s how the U.S. solved its debt situation after World War II, and it’s almost certainly how it will deal with today’s debt.

The bottom line is that the real challenge for our country over the coming years will be debt management, not debt reduction. As long as our fearless leaders in D.C. don’t screw that up, we should be just fine.  Our grandkids won’t have to pay it off because the innovation driving our economy should eventually transform the burden today into a rounding error in the future.