If He Can’t Do It, Neither Can We

Since 1965, the S&P 500 has returned more than 23,000% with dividends. That comes out to about 10.2% annually, which is not too shabby. However, according to Berkshire Hathaway’s most recent annual report, its stock has returned over 2.8 million percent over the same time frame1. It’s done so by delivering a compounded annual return of 20% (double the S&P 500).

Warren Buffett has sat at the helm of Berkshire for over half a century, and outperforming the S&P 500 by a couple million percent has cemented his status as one of the greatest investors of all time. However, the chart below shows that the story changes as the time horizon shrinks from decades down to days. 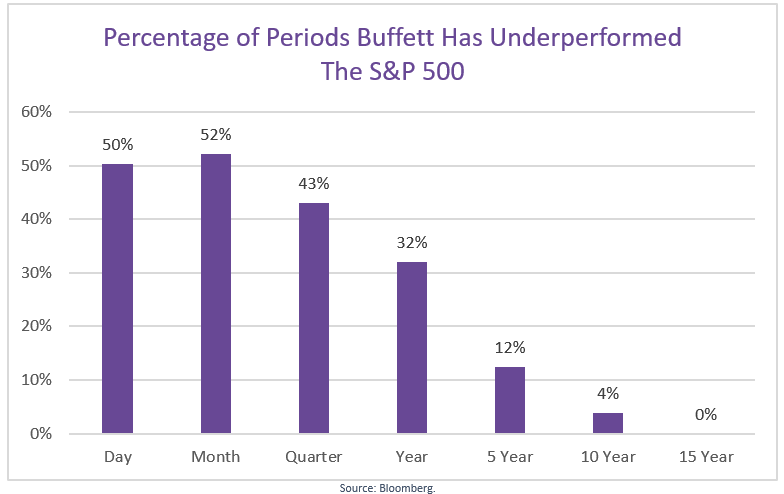 Starting on the right hand side, there hasn’t been a single 15-year period when Buffett underperformed the S&P 500. That’s a staggering feat but also a testament to his style of patience and fundamental analysis.

But as the time horizon shortens, the Oracle of Omaha did worse. Not only has he lost to the S&P 500 one out of every three years, Buffett has done no better than a coin toss on a monthly and daily basis.

Three takeaways here. First, if one of the smartest and most skilled investors to ever walk on earth can’t consistently beat the S&P 500 on a daily, monthly, or even annual basis, then neither can you or I. Spending too much time on the sentiment of the market risks losing the forest for the trees, and this usually ends badly. But this chart clearly shows that there’s no reason to even try. Buffett’s success is all the evidence necessary to show that you don’t need to outperform every year to build wealth.

Second, herein lies the danger of taking annual returns too seriously. Think about what an investor would have left on the table had they “fired” Buffett after a year where he lost to the S&P 500. There’s no question that returns matter, but every money manager underperforms their benchmark at times. Assessing skill takes more than just asking, “What have you done for me lately?”

“Compound interest is the eighth wonder of the world. He who understands it, earns it ... he who doesn't ... pays it.”

There is simply no better way to describe the astonishing power of compounding. Warren Buffett didn’t achieve so much success by knowing what stocks were hot at any given time. He got there because early on he understood compounding better than the rest, and it’s a lesson that can benefit us all.

But compounding requires patience. It doesn’t happen overnight or even in a year or two. The chart below shows this power takes a while to kick in, but when it does, there’s nothing quite like it. This compares the effects of compound interest on a $10,000 initial investment using different rates of return.

The reality is that none of us are probably going to be as wealthy as Warren Buffett for a long list of reasons. Most of all, he is a genius, and there are only so many of those walking around these days. But we don’t need to be geniuses to achieve our financial goals (unless those include becoming a billionaire investor).

Investing is an odd profession because it’s one of the few I can think of where a novice with zero experience and education can achieve success. Think about it. Surgeons and litigators spend years perfecting their trade. Beginners wouldn’t stand a chance in the operating room or in court.

But fancy degrees, residencies, and clerkships are neither prerequisites nor assurances for investing success. Let’s revisit the three lessons discussed above – daily market movements are irrelevant, annual returns can be a trap, and compounding is awesome. All of these can benefit any investment strategy by any investor at any time. All it takes is staying disciplined and keeping it together when markets go crazy. The easiest way to do that is to target a digestible level of risk and stop watching financial news on television.

Lastly, while Buffett gets most of the attention, Charlie Munger, his partner, deserves just as much credit for Berkshire’s success over the years. He’s also way more entertaining because of his bluntness. During an interview by the BBC in 2009, Munger was asked if he was worried that Berkshire’s stock had recently fallen close to 50% during the depths of the financial crisis. Here’s his response2:

“Zero. This is the third time Warren and I have seen our holdings go down, top tick to bottom tick, by 50%.

I think it’s in the nature of long-term shareholders of the normal vicissitudes, of worldly outcomes, of markets that the long-term holder has his quoted value of his stocks go down by say 50%.

In fact, you can argue that if you’re not willing to react with equanimity to a market price decline of 50% two or three times a century you’re not fit to be a common shareholder and you deserve the mediocre result you’re going to get compared to the people who do have the temperament, who can be more philosophical about these market fluctuations.”

Charlie Munger quotes never get old because they are smart, funny, and most important of all, educational. But what’s buried within this sage advice is that any Berkshire shareholder that has benefitted from that 20% average annual return had to watch their position drop by almost 50% in 2008 and over 30% in 2020.

The bottom line is that just because the advice from two investing legends may seem relatively simplistic to follow, that doesn’t mean it’s easy. Tolerating market declines and sticking with a strategy through periods of underperformance take a strong stomach. But that’s the price we must occasionally pay to achieve our financial goals.