Is Disco Coming Back?

The 1970s was a decade to forget. It wasn’t just because of the music or questionable hairstyles either. For most of the decade, the U.S. experienced some of the highest inflation the country has ever seen. It had become such a problem by 1979 that the Federal Reserve forced the economy into a recession just to get inflation under control.

Inflation has a long history of causing more damage than just recessions. It has ruined economies. Zimbabwe printed so much currency that its value fell to the point where they issued 100 trillion-dollar bank notes in 2008 (now available as souvenirs on eBay1). Venezuela printed so much back in 2015 that food trucks were using paper currency to wrap empanadas instead of napkins2.

Fast forward to today, and recent actions by the Fed and Congress appear to be spooking investors into thinking that we could be headed back to the 70s. But before we try to fit back into those bell bottoms, let’s first determine if inflation is even a risk. If so, how bad could it get, and how can investors prepare?

Any estimation of future prices requires an analysis of both supply and demand. There are three secular forces that should continue to drive the demand for goods and services higher.

First, the money supply has simply exploded. Since March 2020, it has risen over 26%, which is the largest annual increase since 1943 (World War II)1. The Fed did so to keep money flowing during the crisis last year, and they are showing no sign of reversing course anytime soon. Combine this monetary policy with checks being sent in the mail from Congress, and the chart below shows that cash in bank accounts has never been higher. 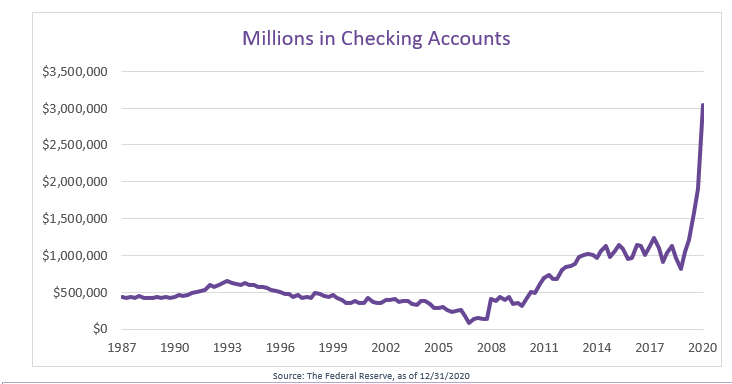 Second, the U.S. consumer is arguably in the best financial shape in modern history. Hourly and monthly wages along with disposable income are at all-time highs3. Total monthly debt payments as a share of income are also the lowest they’ve been in over 40 years4. Since over 70% of the U.S. economy is consumer spending, the combination of cash in bank accounts, debt affordability, and income generation could fuel record demand for goods and services over the next two years.

Third, government spending could be the proverbial gasoline on an already large flame. The recently approved $1.9 trillion spending package combined with another potential $3+ trillion for infrastructure could send demand to unprecedented levels.

But rising demand, on its own, isn’t enough to push prices higher. There’s an old adage that inflation is too much money chasing too few goods, so let’s now shift focus to the supply side to see why the latter could become even more problematic.

It’s hard to look at the supply side and not see an even bigger case for rising inflation. Supply shortages are seemingly everywhere these days. From lumber to semiconductors, production has not kept up with demand for three reasons.

First, despite relatively high unemployment right now, labor shortages have wreaked havoc on supply chains since the financial crisis. The lack of qualified truck drivers, homebuilders, and other skilled technicians has slowed production in nearly every industry. For example, the construction industry lost approximately 1.5 million jobs during the financial crisis (roughly 20%) and still hasn’t fully recovered5. This is a big reason why the cost and time to build new homes has risen dramatically since 2008.

Second, the lockdowns have effectively shut down large supply chains because people aren’t allowed to work. Meaning, even though there may be a bunch of copper in a mine in Chile, it’s not being mined because workers are either choosing to stay home or ordered to do so.

Third, years of underinvestment and neglect into supply chains appears to be taking its toll. For example, a semiconductor plant caught fire this week and could be offline for months6. If so, the dwindling supply of new cars to purchase could become even smaller, since the computers that run cars these days all rely heavily on semiconductors.

The U.S. government and corporations appear to be working to address these challenges. However, it took years for production to fall to these levels, so it’s unlikely to rebound overnight.

Inflation is already here. Lumber prices have almost tripled since the crisis last year7. Copper is up almost 70% over the same time period and hasn’t been this expensive since 2011. Even coffee supplies are shrinking and causing wholesale prices to surge.

But there’s little reason to panic. At least not yet. Inflation is normal and expected in the earlier stages of an economic expansion because it’s indicative of rising economic activity. Unemployment is also still quite high, so the notion that the U.S. economy is overheating feels to be a bit of a stretch. There’s also a big difference between rising prices and hyperinflation, so it’s unlikely that we will be wrapping tacos in $1 bills anytime soon.

There is also an incredibly powerful deflationary force today that didn’t exist back in the 1970s. Technology has driven prices down in nearly every sector its invaded, and it’s hard to imagine the innovation driving artificial intelligence, cloud computing, inventory management, logistics, and so many other technological advancements drying up anytime soon.

However, just because investors shouldn’t panic doesn’t mean they should sit on their hands either. Rising inflation impacts asset classes differently, so it’s important to proactively adjust an investment plan instead of reacting after the fact.

Stocks of companies that are able to pass along cost increases to their customers can preserve their profitability and can act as a hedge against rising inflation. The same goes for commodities, but it’s best to invest in these in moderation. Most commodities tend to be quite volatile, and since they don’t produce any cash flow, earnings, or revenue, they can be difficult to own over longer time periods.

The future for bonds and cash appears to be less optimistic. Since bonds pay a fixed stream of income, rising inflation reduces the value of that stream over time. But by no means does this imply a blood bath or that investors should sell all bonds either. Bonds provide stability in a portfolio, and there are several strategies that have shown to be successful during periods of rising inflation.

The bottom line is that inflation will likely keep rising over the next two years. For now, keep the bell bottoms in the closet and the disco ball packed away in the garage because we are a long way away from reliving the 1970s. But don’t throw them away either because rising inflation is something to watch closely, and our fearless leaders in D.C. are experts at making policy mistakes.