Is It Happening Again?

On October 19th 1987, the S&P 500 dropped over 20% for the single worst day in the history of the index1. That trading session remains one of the most notorious in financial history, and it has ever since carried the name “Black Monday.”

Books have been written, and courses at top business schools continue to teach future financiers about why and how it happened. Black Monday also caused a wave of regulatory changes including trade clearing procedures and “circuit breakers,” which are designed to reduce the effects of panic by halting trading if an index falls past different thresholds.

The turmoil ingrained into the minds of those who lived through Black Monday is a magnet for fearmongers, which is why charts like the one below show up on the internet every year around this time. The purple line is the S&P 500 in 1987 (it’s pretty easy to spot Black Monday), and the yellow line is the S&P 500 through October 14th of this year. 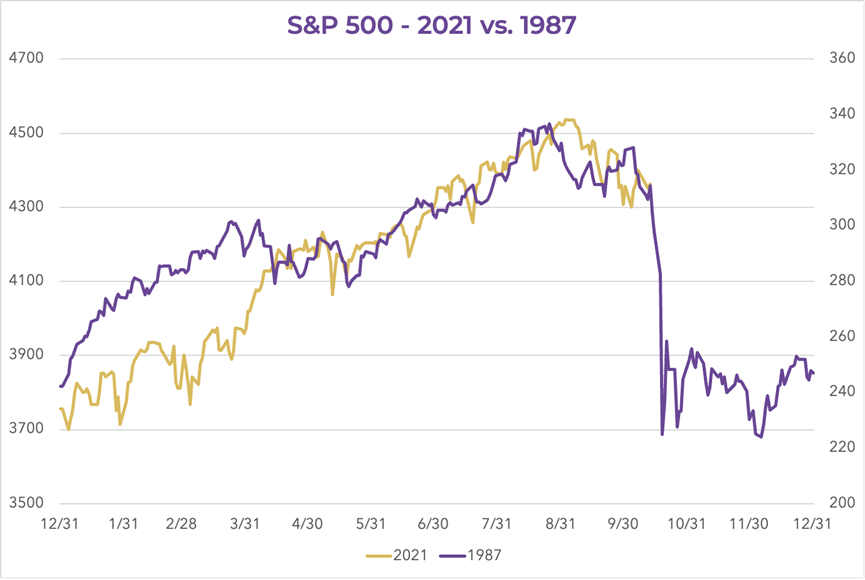 The yellow line appears to be tracking the purple in lockstep, so it’s logical to think that history could repeat itself, but charts like these are useless. Index movements are completely random over such a short time frame, and price level comparisons offer zero insight. Just look at the difference between the two scales. The right vertical axis is the index level in 1987, and the left is 2021, which is ten times bigger.

That’s why the chart below depicting these two data sets on a percentage basis looks very different. Prior to Black Monday, the S&P 500 saw a near vertical rise of close to 40% going into early September. The yellow line tells a completely different story. Sure, the S&P 500 was up just over 20% through early October this year, but that’s still half of what happened back in 1987. 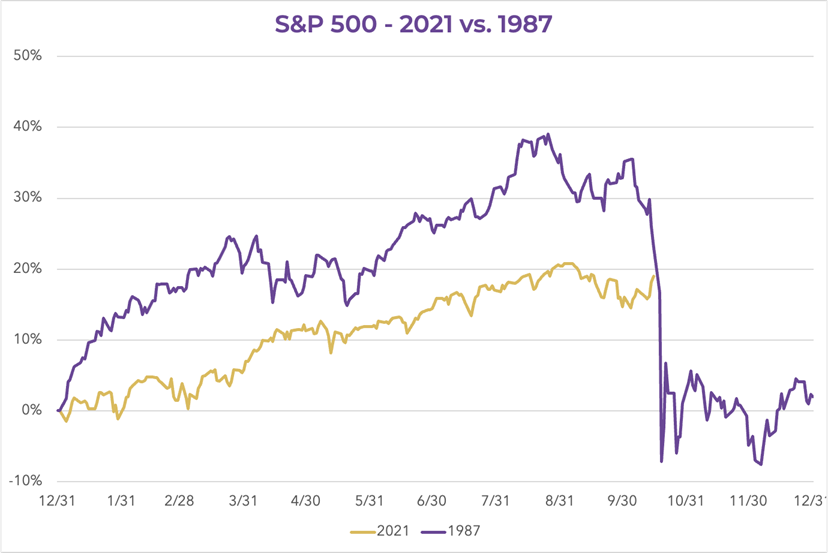 But what neither chart can depict are the differences in the economy and financial markets today versus 1987. The bull market that began in 1982 pushed the stock market higher for years leading into Black Monday1. The Federal Reserve also began raising interest rates that year from a newly appointed chairman (Greenspan) who was untested and new to Wall Street. Adding fuel to the fire, the Treasury Secretary threatened to devalue the U.S. dollar the weekend before Black Monday unless Germany weakened its currency2.

The cherry on top was a chart in the Wall Street Journal that morning overlaying the recent stock market with the one in 1929 (right before the Great Depression)3. Yes, even one of the most widely respected newspapers in the world used the EXACT same chart as above to spook investors (that’s how long these scare tactics have been around).

Today couldn’t be more opposite than 1987. For starters, not only is the Fed not raising interest rates, but they are also enacting extreme monetary policies to keep them as low as they’ve ever been. The drivers of the economy and the stock market are also totally different today versus back then. It’s apples and oranges.

Fearmongers use price charts like the one on the first page to warn investors of an imminent stock market crash. In fact, a simple Google search will show that this ruse has made headlines practically every year since 2012 (see the Appendix below).

These charts look smart because they appear to unearth an alarming pattern. One that brilliant investors who manage trillions in assets with access to the best data and statistical software on the planet have somehow miraculously missed. Oh, if it were that easy.

The chart below is just one example of the dangers hidden within faulty statistical analysis. Upon first glance, there is an incredibly strong relationship between the divorce rate in Maine and the per capita consumption of margarine during the 2000s. However, it is more likely that this is coincidental, and any relationship between the two is “spurious.”

Herein lies the risk with using stock charts that compare one data series to another. There is simply no way to know if the drivers of each are somehow related without conducting deeper analysis.

Traumatic events leave emotional scars that often never heal. Watching a nest egg lose over 20% in less than eight hours certainly qualifies as traumatic, even to the most seasoned investor.

Predators know this, and it is why they will never let investors forget Black Monday. It is an all-access pass to the emotional core of their prey. Once inside, they navigate effortlessly to their intended destination, which is a target’s wallet.

Furthermore, any time the word “anniversary” is applied to a trend, price movement, catastrophe, or anything else related to markets, roll your eyes in contempt and ignore it. Markets do not operate on calendars, so an anniversary - good or bad - provides zero value to an investment process that relies on fundamentals. Markets are event-driven, and the events that led to Black Monday are not the events driving the market in 2021.

Lastly, pundits disguised as historians tend to conveniently omit that despite such a brutal October, the S&P 500 ended up 2.03% and delivered 3.22% in dividends for a total return of 5.25% in 19871. Those who ignored a few volatile days were rewarded.

The bottom line is that I have no idea if the stock market will end the year up or down, but what I am certain about is that these types of comparisons are total garbage. 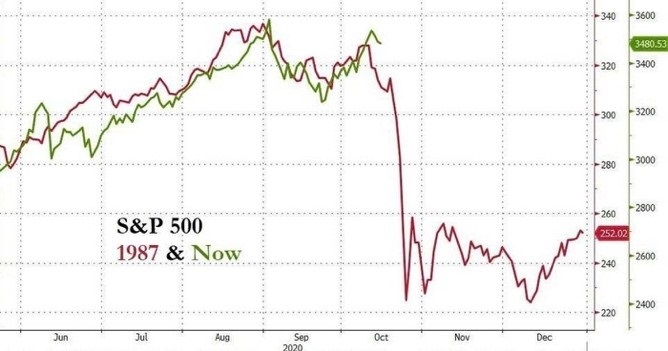 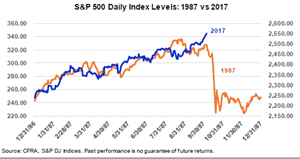 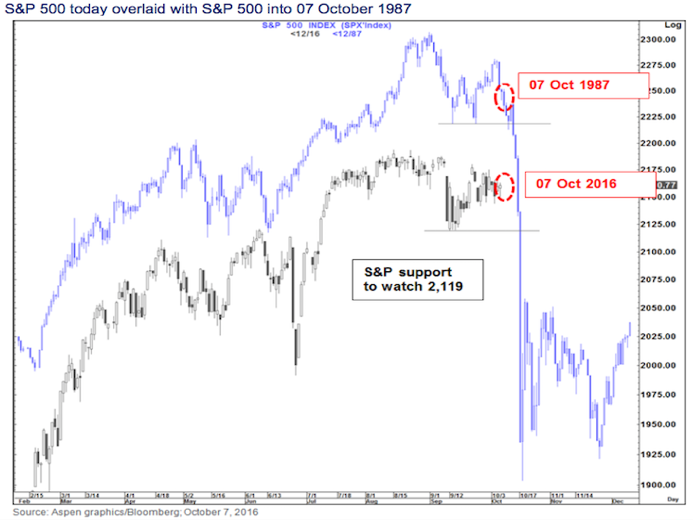 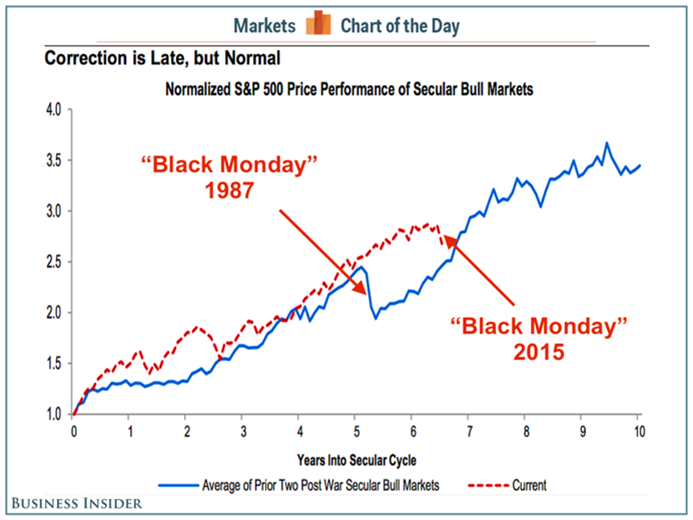 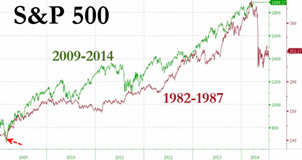 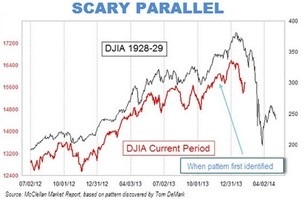