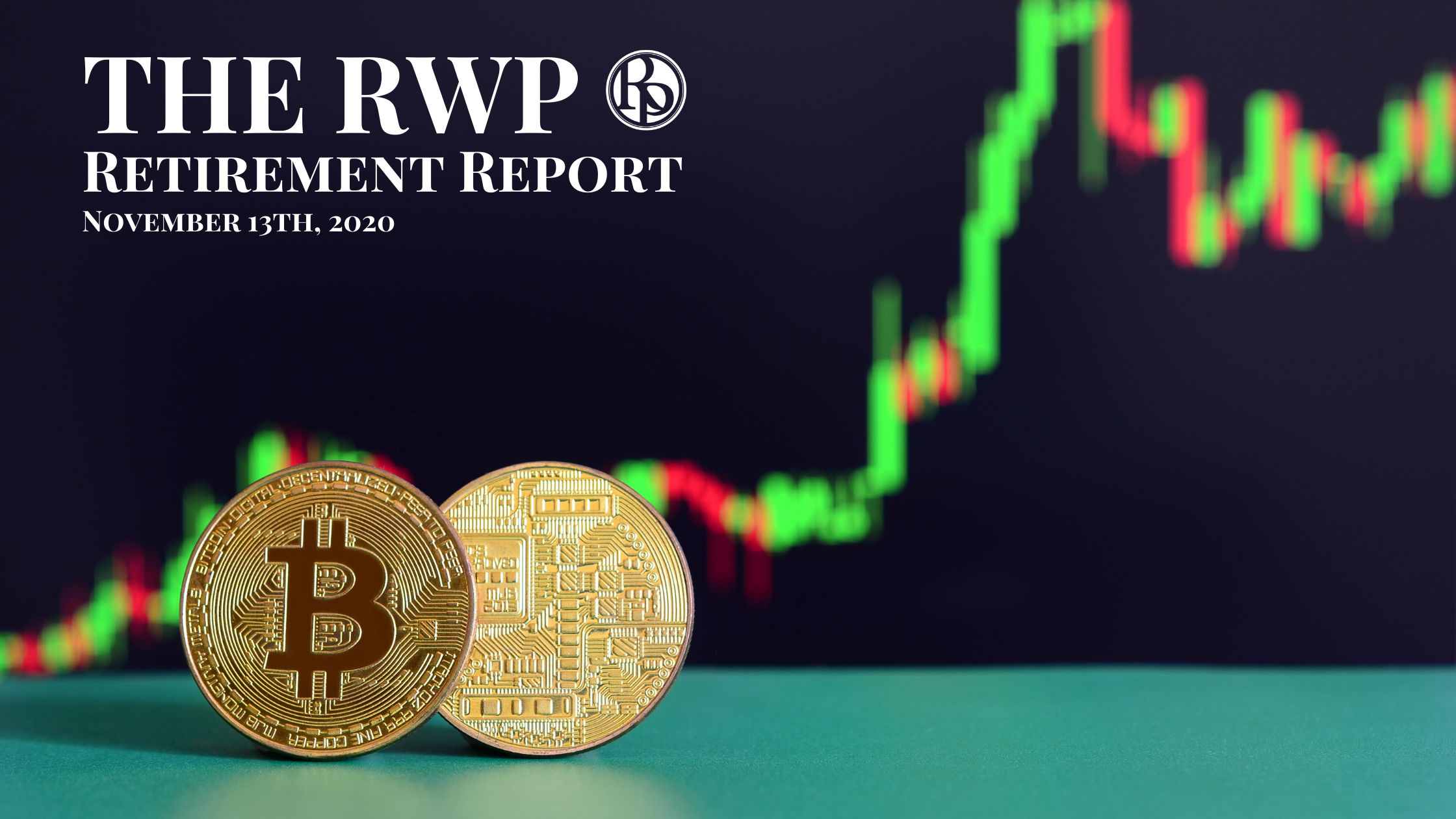 Is It Time to Buy Bitcoin?

The chart below depicts the meteoric rise in bitcoin this year. As of November 12th, one bitcoin will cost over $16,000, which is a price the world hasn’t seen since late 2017. This has prompted more than one billionaire to hit the media circuit to tell everyday investors sitting at home why they’re buying.

Billionaires tend to be pretty good investors, so this has fueled a wide range of interest from Millennials to Baby Boomers. Many are asking if now is the time to own bitcoin, and if so, how much they should buy. But before we address these questions, let’s first explain the concept of Bitcoin and the prevailing bull and bear cases. That way, we can attempt to answer these questions as objectively as possible. 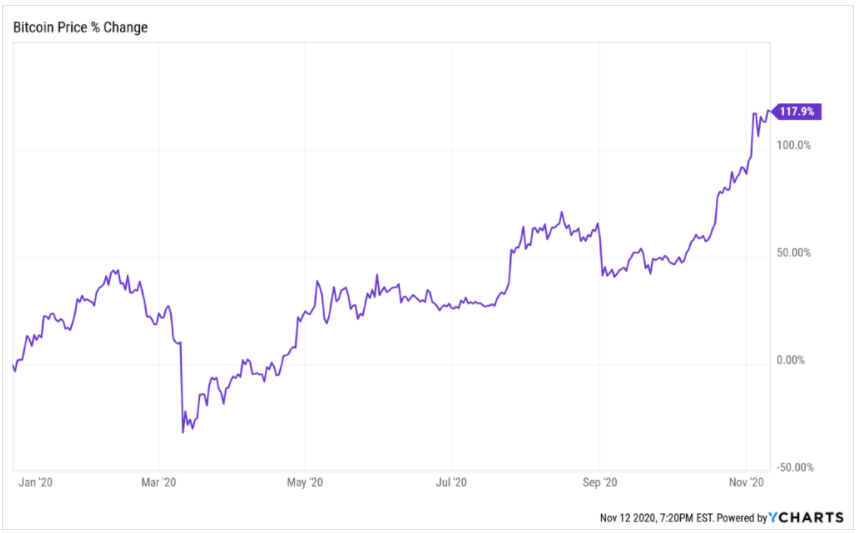 I frequent a coffee shop down the block because it opens early and sells a quality product. This transaction is simple. I pay the barista $3, and she hands me a cup of coffee. It requires only two parties – the buyer and the seller. There is also no record of this transaction that could tie me to the sale. If the coffee shop owner chose not to report the revenue to the IRS, the government would be none the wiser.

Since the dawn of time, cash transactions have worked this way. The buyer hands over cash, gold, or whatever physical form of payment to the seller in exchange for goods or services. While this simplistic means of commerce may seem obvious, the reality of today’s world is that most transactions occur digitally.

When I bought my apartment, I did not arrive at closing with a bag of cash. Instead, I brought a cashier’s check that guaranteed the funds were available. Carrying around a lot of cash is not only heavy but also risky. If robbed, I would have had no recourse. A check also ensured a secure transaction because only the seller could cash it.

Banks facilitate transactions because they can charge fees and earn a profit. There is also a record of this transaction that allows the government to assess taxes.

Another reason why sellers use banks is because cash that is stored digitally can be manipulated. Consider how easy it is to copy text in a Microsoft Word document and then paste it repeatedly. Funds stored electronically can be “copied” in the same manner (think of this as printing counterfeit currency on a computer). Hence, we use these trusted third parties to prevent fraud.

Bitcoin is a digital currency that was invented to solve two challenges. The first was to conduct cash transactions without cash. I could buy coffee using bitcoin stored in a digital wallet on the internet instead of dollar bills in a physical wallet. I preserve my anonymity and neither party could ever prove the transaction occurred.

The second was to eliminate the middleman. Merchants do not want to sacrifice a portion of the sale to credit card processors or banks, but they also do not want to subject themselves to the risk of fraud. By using bitcoin, the coffee shop owner could sleep well at night knowing that the bitcoin received is not counterfeit.

The technology supporting bitcoin and other “cryptocurrencies” is incredibly complex and also beyond the scope of this discussion. For now, just think of it as any other form of currency whose value fluctuates relative to other currencies in the same manner that the U.S. dollar moves against the Euro.

Bitcoin is just like any other asset, where its price is determined by the supply available and the demand to own it. The bulls view both to be favorable over the long run.

On the supply side, there are only 21 million bitcoins that can be “mined.” Once these are out there, that’s it. No more bitcoin unless the source code is altered. As of August 2020, roughly 18.5 million bitcoins had been mined, and future supply growth is estimated at 2.5% annually2.

Certain supply leaves demand as the primary price metric, and the bulls argue that most indicators look attractive. Crypto savings accounts and increased use by corporate treasuries should create a more stable foundation of users. For example, MicroStrategy (ticker: MSTR) and Square (ticker: SQ) pumped in hundreds of millions of dollars of their financial reserves into bitcoin2. PayPal also just announced that it would allow its users to buy, sell, and exchange the asset from their accounts on the platform.

This adoption is being fueled by a lot of extremely smart people with big bucks. Their commitment to something so nascent is a sign that they are going to do everything in their power to make bitcoin a success.

Another reason for so much recent interest is its similarities to gold. Since they cannot be printed like paper currencies, their fixed supply makes them a potential hedge against inflation and a weakening U.S. dollar. Bitcoin may even be more suitable than gold since the cost of storing bitcoins is cheaper and they are easier to transport.

Add it all up and any asset where robust demand exceeds tepid supply growth should see its price rise steadily over time.

Valuation for a digital currency that is a decade old and used more for money laundering and evading capital controls than it is for purchasing goods and supporting international trade remains impossible. Any attempt to value bitcoin will be as untested as the currency itself, and the bears often point to the bursting of the bitcoin bubble in 2017 as evidentiary to their refusal to invest.

Furthermore, three structural risks remain with bitcoin. The first is jaw-dropping volatility. The chart below compares the annualized volatility of bitcoin to the S&P 500. Since 2012, bitcoin volatility has been more than six times the volatility of the S&P 500 on average. 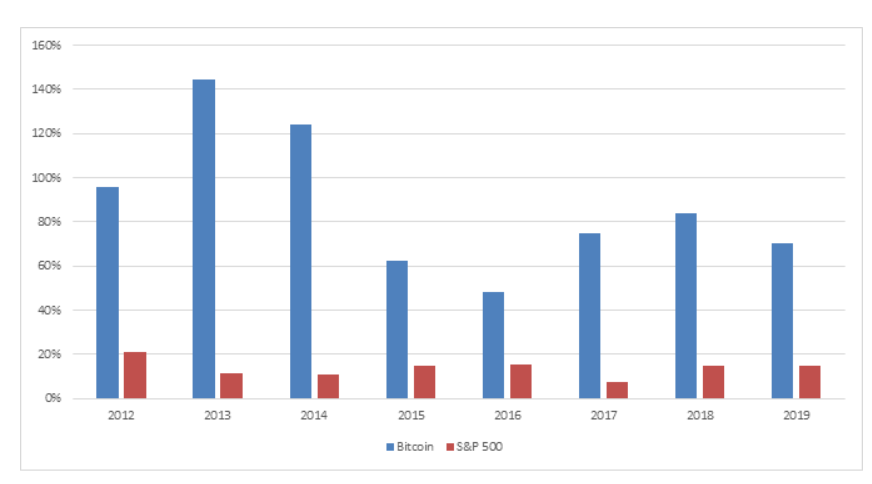 Not only does this make for a ride that most investors are unable to stomach, it also makes it unusable as a currency. If I buy that cup of coffee using bitcoin, its value can change before I’m finished drinking it. That puts the coffee shop at risk of bitcoin falling before they can even convert it to dollars. Most merchants are not equipped to hedge this type of currency risk.

The second risk is fraud and manipulation. It’s hard to go more than a few months without a story about investors getting scammed or hacked. Digital wallets exist online, and FDIC insurance will not protect these accounts like it does for depositors.

Furthermore, a recent publication estimates with 95% certainty that bitcoin was manipulated in 2013 and 2017, and 98% certainty in 2019. If so, any attempt to value bitcoin was meaningless because the price did not reflect a well-functioning market of properly motivated buyers and sellers3.

The third risk is regulation. At any point, any major government and/or regulatory body could wreak havoc on bitcoin marketplaces by cutting off access to banking systems. If so, the chances that it becomes a viable currency go to zero pretty fast.

I wish I could tell you which side will prevail. Both cases are plausible, but I don’t own a crystal ball, so I have no clue what’s going to happen next. But that’s generally the case when it comes to investing. You never really know what’s going to happen, so when you invest, you do your best to mitigate risk.

Within this context, for those who want to run with the bulls on this one, there are three rules you simply must abide by to try to keep the risk to your financial future as low as possible.

First, use a reputable platform. Too many of the lower-tier trading platforms and digital wallets are sitting ducks just waiting to be hacked. Use Coinbase or another in equivalent size. Owners might even consider storing coins offline and away from the internet (“cold storage”).

Second, under no circumstances should you ever try to trade any cryptocurrency. The volatility should fall as adoption continues to rise, but until then, bitcoin will probably remain an extremely volatile asset class. The traders that are making millions trading bitcoin are professionals, and the last thing you want to do is go up against Michael Jordan without even understanding the basic rules of the game.

Think about it this way. If you’re buying bitcoin because you believe the bulls, you’re expecting one bitcoin to be worth hundreds of thousands or even millions one day. If so, who cares what bitcoin does between now and then?

Third, only invest what you are comfortable watching go to zero. If the bears are right, this is snake oil, and you could lose every dime. Therefore, only put in what won’t cause you financial and emotional damage if you walk away with a goose egg.

The bottom line is that it’s ok to own cryptocurrencies as long as your financial future is not dependent upon the price of them rising over time.