Is This A Lehman Moment?

China Evergrande Group has racked up over $300 billion in debt, and there’s a high probability that its lenders aren’t going to get all their money back1. It’s gotten so bad that management is even trying to pay suppliers with unused real estate property2. Making matters worse, it’s unlikely that Beijing is going to bail them out.

Rewind the clock 13 years ago, and for some investors, this mess feels eerily reminiscent of the days before Lehman Brothers failed and sparked the worst financial crisis since the Great Depression.

But before assessing whether Evergrande could be another “Lehman moment,” let’s first explain what caused the last one because Lehman was only part of the story. There were two events that transformed what should have been a garden-variety recession into a crisis that almost destroyed the global financial system.

The first was a rule implemented by the Financial Accounting Standards Board (FASB) on November 15, 2007. It was called FAS 157, and it changed the way banks and financial institutions reported the value of “illiquid” assets on their books.

An asset’s liquidity is measured by how easy it is to sell. A publicly traded stock is very liquid because it can be sold quickly with relatively low transaction costs. The more liquid an investment, the more accurate the market price due to so many buyers and sellers transacting.

Real estate is illiquid because transactions take time and have relatively high transaction costs (broker fees, title, etc.). Therefore, determining the market price for a house is harder due to fewer transactions.

Liquidity can change over time. Those who have tried to sell a house in a buyer’s market know this all too well and often must choose between accepting lowball offers or taking the house off the market.

Banks typically take deposits and use them to create loans for small businesses, etc. They also occasionally use deposits to buy bonds and other assets that offer yields higher than what they pay depositors. But banks need to be sure they can sell these assets quickly if depositors were to ask for their money back.

FAS 157 was implemented to ensure banks could do just that. It required banks to solicit daily bids on all assets they owned to be sure the total value of those assets could cover their liabilities to depositors. On paper, this is completely logical and works fine in normal market conditions. But when all the buyers leave a market like they did in 2008, as the economy began to decline, the law of unintended consequences quickly reared its ugly head. Here’s how.

Let’s assume a bank purchased an illiquid asset for $100 that paid interest on time and showed no signs of impairment. FAS 157 still required this bank to solicit bids from buyers. If the only bid one day was for $10, the bank would be required to write down the value of that asset by 90%, even though there’s been no fundamental deterioration.

This not-so-hypothetical example is what created so much unnecessary chaos in 2008, because banks could not maintain their “capital ratios.” These are used by regulators to ensure a bank can pay back its depositors and keep other risks in check.

To keep these ratios above water, banks were forced to sell assets at fire sale prices to raise capital or risk being shut down. In effect, the crisis became a self-fulfilling prophecy because FAS 157 ultimately required banks to sell real assets to cover the fictitious losses it created.

Think about it this way. Assume a homeowner puts her house on the market during a recession. If the only offer submitted was for 80% below what she paid, she probably would not accept it. But banks did not have that option so let’s subject the homeowner to FAS 157.

Here, she would be required to pay back her mortgage or post more collateral if the market price for her house fell below some threshold. She must also try to sell her house daily for the duration of the loan because the mortgage provider felt this determined the market price of the house.

In this instance, she would be required to hand over more cash to the bank to cover the paper loss generated by a lowball offer. If she did not have the cash on hand to do so, she would be forced to accept the offer. The fact that the house was in the same condition as the day she bought it (no sign of impairment) and the mortgage had been paid on time would have been irrelevant.

The chart below is no coincidence. Soon after FAS 157 infected corporate America, the stock market began its death spiral and did not stop until FASB proposed easing guidelines in early 2009. 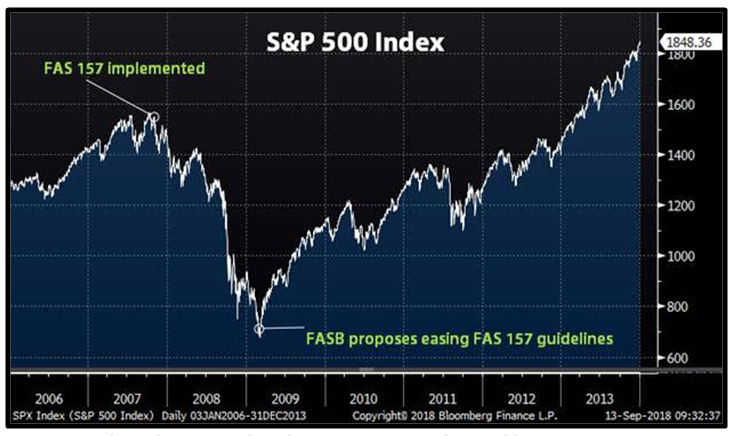 What doused the economy in a pool of gasoline hid mostly in plain sight because it was too boring for financial news. Bizarre accounting rules do not sell ad space as well as evil hedge funds, corrupt lenders, and complex financial instruments. But gasoline on its own is not all that dangerous, so let’s now discuss the proverbial match that ignited it all.

Lehman Brothers was one of the most prestigious firms in the world. They hired only the best and brightest to transact in some of the most sophisticated corners of finance, and their bankruptcy in September 2008 created panic in financial markets unseen since the Great Depression.

Lehman owned what the media classified as “toxic assets,” which were illiquid debt instruments that became difficult to price when buyers vanished (per the reasoning above) as the economy worsened.

Despite the name, most of Lehman’s assets were not that toxic. They paid on time, management had no intention of selling, and since Lehman was not a traditional bank that took deposits, the market value of these assets was less important.

The problem is that FAS 157 impacted all financial firms, so Lehman was required to write down the value of their assets and take massive paper losses. This made it impossible for them to access short-term funding to keep the business operational. The irony is that despite assets far exceeding their debt at the very end, Lehman simply could not pay their bills and was forced to file for bankruptcy protection.

Meaning, Lehman was illiquid, not insolvent. It is no different than when wealthy individuals go bankrupt. They may own mansions all over the world, but they don’t have the cash to pay bills and cannot sell houses fast enough to cover expenses.

However, Lehman going under was not enough to light the match. Bankruptcies happen all the time, and this was not the first high-profile victim of FAS 157. Bear Stearns almost failed six months prior for similar reasons until the government brokered a deal at the 11th hour. The inconsistency of the government is what likely sparked the flame. They chose to save Bear but not Lehman, and this decimated investor confidence.

Not confidence that the government will save large institutions from bankruptcy. It’s often better to allow companies to fail than to waste tax dollars. Rather, it is the confidence instilled by consistency. The arbitrary decision to save Bear Stearns, let Lehman fail, and then days later nationalize AIG left investors scratching their heads.

The entire financial system is based on trust, and when that foundation is eroded from inconsistency and unpredictable decisions by regulators, lenders stop lending because the rules keep changing.

After Lehman went under, the government learned their lesson fast and began brokering deals to save other banks. But the damage had already been done.

The bankruptcy created an unprecedented credit contraction across the globe as banks stopped lending, collateral was seized, and foreign exchange lines were terminated (halting global trade). Lenders were terrified because nobody knew who would fail next. It took the coordination of central banks and unprecedented government spending to save global financial markets and replenish confidence and trust back into lenders.

A business school professor once warned me that the only number guaranteed to be accurate on financial statements is the date. So, it’s crazy to think that an accounting rule could cause so much mayhem when regulators, investors, and executives all realize that numbers rarely tell the whole story. But that’s what happened.

Subprime mortgages, corrupt bond rating agencies, unethical lenders, borrowers taking on too much debt, the Fed raising interest rates too high, and every other excuse that has been used to blame the crisis is incomplete. These created the recession, but what transformed it into a crisis was a loss of faith.

So, it’s not enough to ask if Evergrande could be another “Lehman moment,” but rather if it could cause another crisis of confidence here in the U.S. The odds of this happening are very low.

According to Goldman Sachs, Evergrande accounts for only 4% of China’s total property sales, and its 123,000 employees and 3.8 million contractors are a fraction of China’s over 400 million urban labor force. Even if contagion were to spread into China’s economy, Beijing would almost certainly step in to avoid a meltdown (they have already started to do so).

Banks in the U.S. also have very little exposure to Chinese real estate, but more importantly, this is not 2008. Financial markets are far healthier, and the regulatory changes enacted after the crisis have made the firms that transact in them stronger. More broadly, S&P 500 revenues coming from the greater China area, which includes Hong Kong and Taiwan, accounted for only 2% of revenues in 20193. Even more broadly, U.S. exports to China accounted for only 6% of overall U.S. exports in 20194.

But what if I’m wrong? China is a communistic black box, and I’m no expert. It also wouldn’t be the first time that an economy failed because of too much debt. Contagion or not, those headlines would cause investors across the globe to freak out. The volatility alone could wreak havoc.

Protecting against what could happen next begins with accepting why investors lost so much in 2008, and neither FAS 157 nor Lehman were the culprits. People lost money because they misjudged their ability and willingness to take on risk and sold into the panic. It’s that simple.

The best way to prevent panic selling is to work with your financial advisor to target an appropriate level of volatility. Because the better you sleep at night, the less risk of making an emotional decision that will do little more than convert short-term pain into long-term misery.

The bottom line is that Evergrande probably won’t collapse the underlying trust that supports financial markets, but sleep is important, so stay within your comfort zone just in case.