It’s A Jungle Out There

The movie Up In The Air chronicled a road warrior played by George Clooney who was obsessed with accumulating frequent flyer miles. His character’s life wasn’t much different than mine until I had kids. It was not uncommon for me to fly over 200,000 miles in any given year, and all those frequent flyer miles paid off when it came time to pay for a safari honeymoon.

To be clear, Africa was not my idea. I don’t get along with Mother Nature at all, so vacationing where bees can sting through Kevlar and spiders get mistaken for livestock was not appealing. I kicked and screamed for months because I also worked hard for those frequent flyer miles, and I didn’t want to use them to fly halfway around the world to visit a fancy zoo.

But like most husbands-to-be, I eventually caved, and upon arriving to the “bush,” I quickly realized that I had never been so wrong. The trip was life altering, and I came back with two very important lessons learned: (1) push my boundaries, and (2) don’t argue with my wife.

On our very first drive, we approached a pride of lions patiently hunting an injured cape buffalo that had fallen back from the rest of its herd. Two female lions eventually made their move and attacked not 50-feet from our vehicle.

Words cannot explain the exhilaration of watching a hunt for the first time. However, our excitement did not last long because watching an animal endure that amount of pain became very real, very quick.

A few minutes in, I tapped Nick, our guide, on the shoulder and asked him to leave because neither of us could stomach the gore any longer. But before we drove off, he took the time to explain to us the importance of this hunt because it was clear to him that we were missing the big picture.

The lions get food and live to fight another day. Weak buffalo are eliminated, which helps the gene pool by leaving only the strong to mate. The ecosystem benefits from the predators controlling the buffalo population since these grazers eat most of the grass and plants. This entire process ensures “harmony” in nature. For example, if lions were eliminated, then the buffalo population could explode and damage the land from too much grazing.

Armed with the proper context, we were then able to reassess the situation. What initially seemed gruesome became matter of fact, and this shift in mindset changed the way we viewed predators like this guy below (he’s maybe 8 feet from us). Our perceived cruelty of the jungle was just our inability to see the forest through the trees. 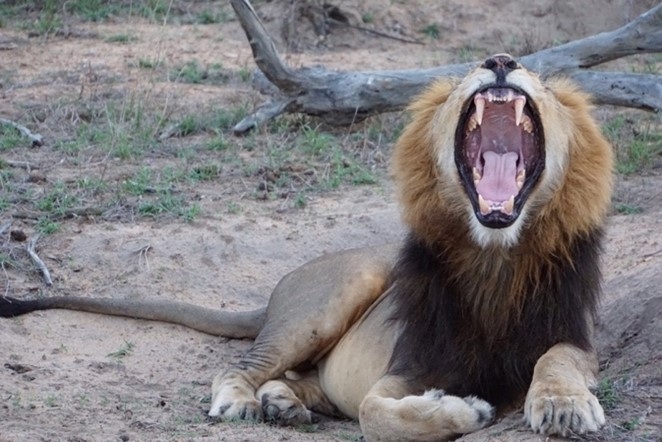 The Strong Get Stronger

Financial markets aren’t much different from the bush. For example, let’s rewind the clock back to 2014, when oil prices were in triple digits. Drillers were making a killing because nearly all known oil reserves were profitable with oil above $100/barrel. An ample food supply attracts predators, and the potential for big profits does the same for capitalists. New oil companies were being formed overnight, and they all were so anxious to grow as fast as possible that many threw discipline out the door.

Fast forward to 2016, and this huge flood of supply combined with an ill-timed price war waged by Saudi Arabi caused oil to crash. Times quickly got tough for producers, and natural selection was the only force that could bring harmony back to this sector.

The strong were those with seasoned and disciplined leaders, diverse operations, and sound financials. These companies represented the smarter and healthier gene pool. The weak were those who took on way too much debt, spent like drunken sailors, and had bad management teams. These companies were injured buffalo in an ecosystem that offered no protection from the imminent dangers that hunted them.

Ultimately, the weak didn’t survive. The cruelty pervasive throughout financial markets would not allow them to remain in business. Some filed for bankruptcy and others got acquired by the strong. While this outcome may sound as harsh as the fate of the wounded buffalo, it is just as important to establish balance in financial markets as it is in the wild.

That’s why stock market corrections crush weak investors who can’t take the volatility but reward the strong who realize that swiftly falling stock prices often kindle future rallies. Or why the companies with shaky fundamentals that fueled the dot-com bubble didn’t survive, but the few that did became some of the largest enterprises on the planet today. It’s also why recessions punish the over-levered and arrogant while benefitting those who remain disciplined and wait for bargains to come their way (the strong get stronger).

Simply put, natural selection drives economies and markets as it does the wild, and it’s unlikely this will ever change.

There’s another important takeaway from this story. Nick had been a safari guide for over a decade, witnessed thousands of kills, and earned degrees in animal science. He was not only trained, but also experienced enough to assess the situation without emotion. That’s why he didn’t see a brutal act of violence but rather a vital function to the overall health of the bush.

We were two New Yorkers that felt grass under our feet maybe five times a year, rarely encountered any animal larger than a bulldog, and lived in an ecosystem so abundant that finding Ukrainian food after midnight was easy. Since we had no perspective, we defaulted to an instinctive response of fear and empathy.

It’s one thing for lack of perspective to put a damper on a vacation, but it’s a whole other thing to let it risk your financial future. That’s why it’s so important to try to gain as much perspective as possible by listening to people who (1) know more than you, and (2) don’t agree with you. It will make you a stronger investor. Here’s how.

Perspective can take an instinctively scary and negative event like bankruptcy and transform it into a positive and necessary function for a sector, niche, or idea to become stronger. It can also expose risks today that challenge long-held beliefs. For example, cash may have been king years ago, but today it’s just losing money safely.

But gaining perspective isn’t always fun. Nobody gets excited at the prospect of being proven wrong. It’s way easier to just seek out those who agree with you, but this “confirmation bias” can be lethal. So, try to be thankful the next time someone points out a mistake or an error in analysis because they could be helping you avoid disaster.

The bottom line is that it is a jungle out there, but having the right perspective is often all you need to see opportunities and expose risks that hide in plain sight.