It’s Not All Bad.

The list of stuff to worry about right now feels longer than normal. War, inflation, gasoline prices, COVID-19, national debt, and rising interest rates are just to name a few. Each could represent a legitimate headwind to growth, and investors are wise to take notice.

But there are also a lot of tailwinds right now, so let’s look at the data to see why they appear stronger and should last longer than any of these headwinds.

Inflation gets a lot of press, but there’s another data point that’s also at a four-decade high. Real gross domestic product (economic growth minus inflation) was up 5.6% in 2021, making it the best calendar year since 1984.

Even though we expect slower growth ahead, that’s not necessarily bad for stocks. For example, the 2010s was a period of relatively slow economic growth, including oil prices trading above $100/barrel from spring 2011 through summer 2014. Yet the S&P 500 delivered over 320% in total return for the decade1. Slow and steady often wins this race.

Employment is almost back to normal.

The February jobs report was a blowout. Nonfarm payrolls rose 678,000 for the month (expectations were for 440,000), and payrolls were revised upward for December and January. The chart below shows that the U.S. has made back almost all that was lost prior to the government-mandated shutdown of the economy in March 2020. This progress has also driven the unemployment rate down to 3.8%, which is one of the lowest rates on record1.

More people working means more money to be spent on goods and services. Given the U.S. economy is 70% consumer spending1, employment is critically important to keeping Americans doing what we do best, which is spending money.

Supply chains appear to be improving.

While gasoline prices and rents could continue to pressure consumers, other sources of inflation may soon moderate. For example, the chart below depicts the amount of time ships have had to wait to dock in Los Angeles (one of the busiest ports in the world). Data like these suggest that many of the supply chain issues facing the U.S. could start to ease. 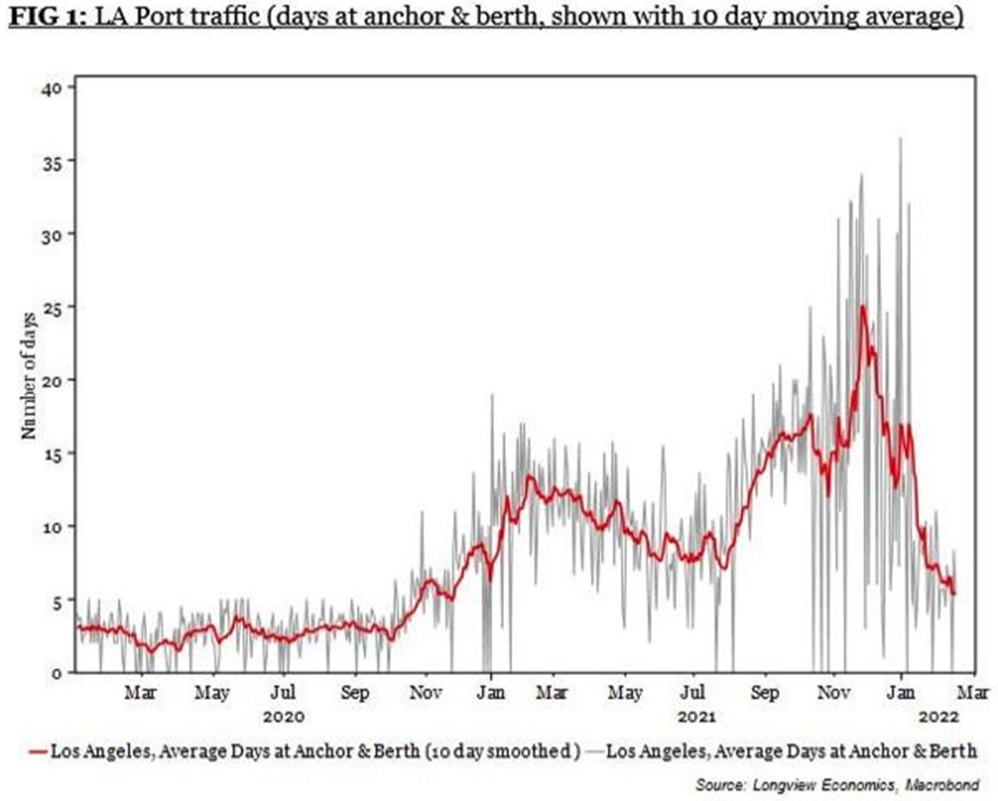 The Federal Reserve is expected to raise interest rates in the coming weeks, and the potential impact on mortgage rates already has some pundits calling for a crash. The argument is that rising rates will make the monthly mortgage payment unaffordable to most buyers.

But the Fed moving its target interest rate from zero to 0.25% probably won’t impact demand all that much. People have to live somewhere, and it’s plausible that rents could rise way more than mortgage payments now that moratoriums on rent increases have mostly expired.

Furthermore, no market discussion is complete without looking at the supply side. The chart below shows that inventory is not only low, it’s at an all-time low going back to 1982.

Strong housing prices increases home equity. This tends to make consumers more confident about their financial situation, which could lead to more spending.

Consumers have a massive war chest.

Jerome Powell recently said a rough rule of thumb is that a $10 increase in the price of a barrel of oil leads to a 0.2% increase in inflation and a 0.1% hit to growth2. The question is how high energy prices can go before inflation destroys demand for other goods and services.

Back in the day, it didn’t take much because people drove more, cars weren’t as fuel efficient, and Americans saved less of their paycheck. But over the last two years, the chart below shows that Americans saved around $2.4 trillion more than would have been expected due to reduced spending and higher incomes (wage growth is the highest it’s been in two decades).

Add in those checks that were sent in the mail by Uncle Sam, which totaled $2.2 trillion, and consumers have a multi-trillion buffer to help ease inflation woes.

Rising interest rates should be good for stocks.

The data overwhelmingly suggests that periods of rising interest rates tend to coincide with (1) short-term volatility, and (2) subsequent equity market gains. Back in December 2015 (chart on the left), we were in a bull market when the Fed raised 0.25% for the first time in a decade.

Go back further and the story remains the same. On their own, rising rates don’t cause recessions. It takes either a policy mistake by the Fed or a major shock to spending, and those tend to happen later in the cycle. For now, the best possible outcome for the U.S. economy and equity investors is higher interest rates and less meddling from the Fed.

The chart below shows the S&P 500 index level since 1927. Wars and conflicts have been a constant throughout history, yet the index has remained resilient through it all. In fact, it’s risen so much that this chart had to use a logarithmic vertical axis to show just how much money has been made for those willing to see past the mayhem. 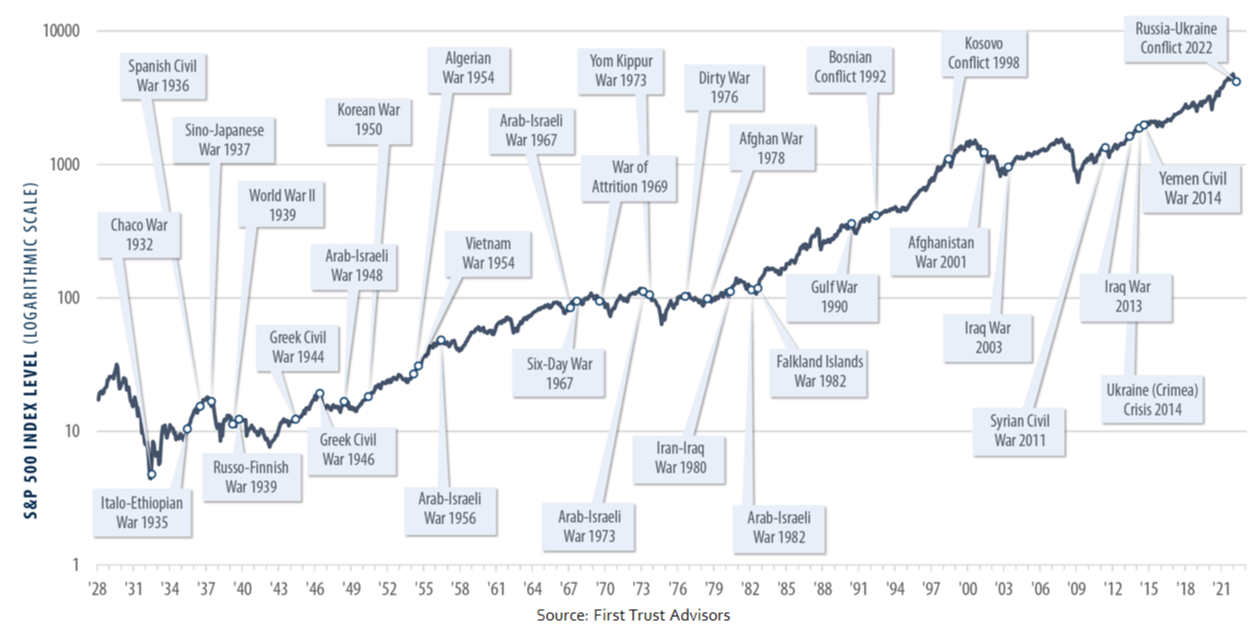 The bottom line is that there hasn’t been a time in history when the U.S. economy was firing on all cylinders. It’s too big with too many moving parts. But despite its flaws, it’s one of the most powerful forces in the known universe because it’s fueled on free market capitalism and an incentive structure that rewards entrepreneurship and innovation.

That’s why it has navigated headwinds way worse than anything we’re facing now and why we expect it will do just fine for the foreseeable future.