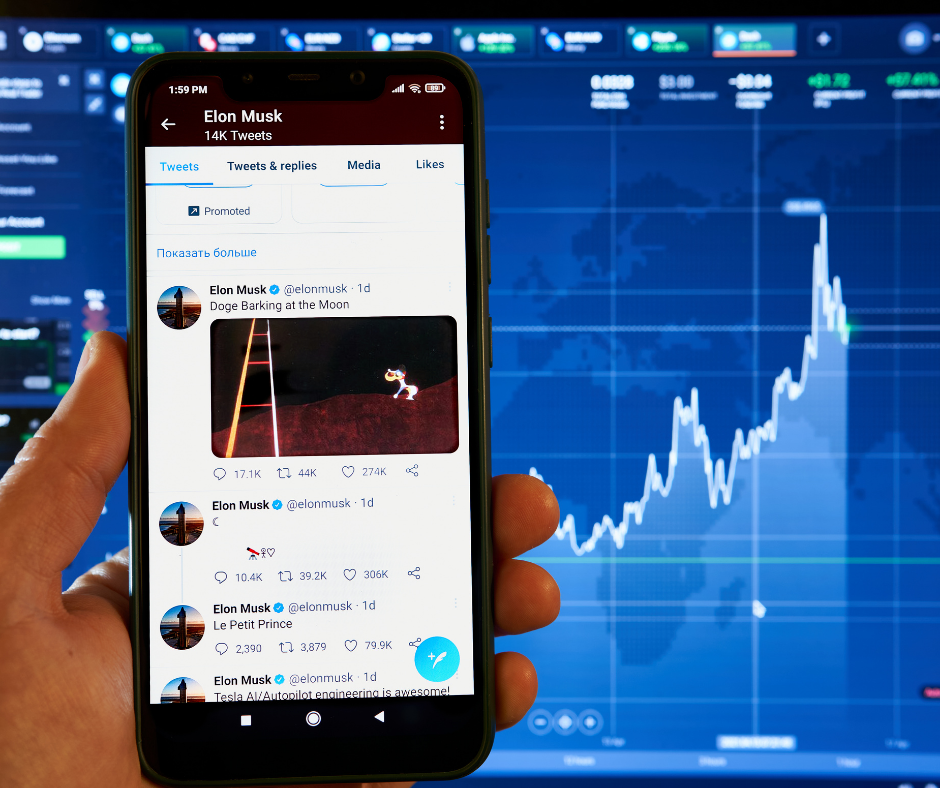 Google provides a service called Trends, which graphically displays the popularity of a search phrase over time. The chart below is a trend report on “GameStop,” and it’s pretty clear that this story is still on the minds of investors. 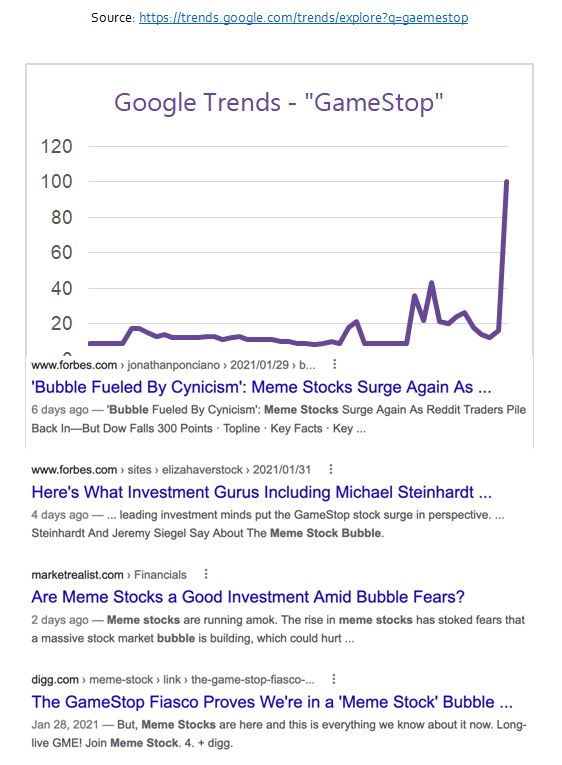 It’s not surprising. It feels like the last time a group of stocks soared this high was back in 2000, after dot-coms sprouted up like weeds and fueled one of the largest bubbles in history. The scars from this traumatic event never healed for some, so it makes sense to see the internet inundated with articles like these1:

However, this meme stock saga lacks the size, fuel, and interest to turn into something more serious. Let’s discuss each in greater detail to better understand why this is nothing more than a glorified “pump and dump” scheme that poses little risk to those sitting on the sidelines.

The GameStop/Reddit story has everything. David versus Goliath, anti-capitalistic heroes going after evil hedge funds, and countless stories of newly minted millionaires. It even got a mention on Saturday Night Live last week, and Netflix is now rumored to be fast-tracking a movie for release later this year2.

It’s rare to see a stock market story dominate prime time news. However, during the week of January 26th, GameStop averaged a staggering 2,900 new publications per day from news sources tracked by Bloomberg3. AMC and Bed Bath and Beyond came in at over 1,400 and 600 respectively. The average daily number this year for an S&P 500 company has been 86.

The speed and breadth of this media attention has created a perception that could not be more disconnected from reality. Add up the market caps of GameStop, AMC, Bed Bath & Beyond, and BlackBerry and it’s around $35.6 billion. When compared to the S&P 500’s $32 trillion market cap, these four stocks combined are roughly 0.11% of the size of the index. Compare them to global equities at an estimated $100 trillion in size, and they drop to an infinitesimally small 0.035%. Even if every hedge fund that were short these stocks blew up, the collective losses wouldn’t add up to a rounding error.

This is in sharp contrast to what fueled the dot-com bubble. Back then, companies run by freshly minted MBAs with no earnings, cash flow, or even sales were raising billions with ease by selling their worthless shares in initial public offerings (IPOs). There were so many of these companies going public every week that it was hard to keep track.

Today, this mania is contained to a handful of stocks that didn’t trade much and were heavily shorted (making them sitting ducks for a coordinated attack). And despite the media attention, these will likely remain isolated events that are microscopic when compared to the rest of what looks to be a quite healthy and ambitious equity market.

Margin debt is money borrowed by investors to purchase stocks in a portfolio. The logic here is that if a loan to an investor runs 5%, and this investor believes that a stock could return 20% a year from today, then why not use someone else’s money to invest for a 15% (20% - 5%) profit?

Pretty much anytime the stock market reaches new highs or a handful of stocks soars, financial news reaches into their cabinet of fear and panic and dusts off the cautionary tale of rising margin debt. This time is no different, and the story goes something like this.

As investors accumulate more debt to buy more stocks, the valuations of stocks are pushed up to stratospheric levels. Margin loans use investors’ existing stock portfolios as collateral. If stocks begin to sell off because valuations can no longer be supported, then the value of the collateral falls, triggering a “margin call.” Investors are then required to put up more collateral or pay back the loan. The easiest and most likely way to accomplish this task is to sell stocks. But this means selling stock in a falling market, which is akin to throwing gasoline on a fire. This drives the broader market down even further to the point where we are all living in tents, and our financial system reverts to bartering for goods and services.

Making matters worse, the chart below appears to indicate a very strong relationship between margin debt and the S&P 500’s performance. But it’s useless for two reasons. First, absolute levels of debt are meaningless, so it’s important to put the debt in context by comparing it to the asset(s) the debt supports. For example, a $100,000 loan for a $2 million house is less risky than a $1.9 million loan for the same house. If the buyer were to default, the bank could sell the house and most likely collect $100,000 much faster than $1.9 million.

Debt should only be viewed relative to assets. Banks do this every day when consumers apply for a mortgage. They compare the amount of the loan to the value of the house, often referred to as “loan-to-value,” and in this case, doing the same should view margin debt as a percentage of client assets (seen below). 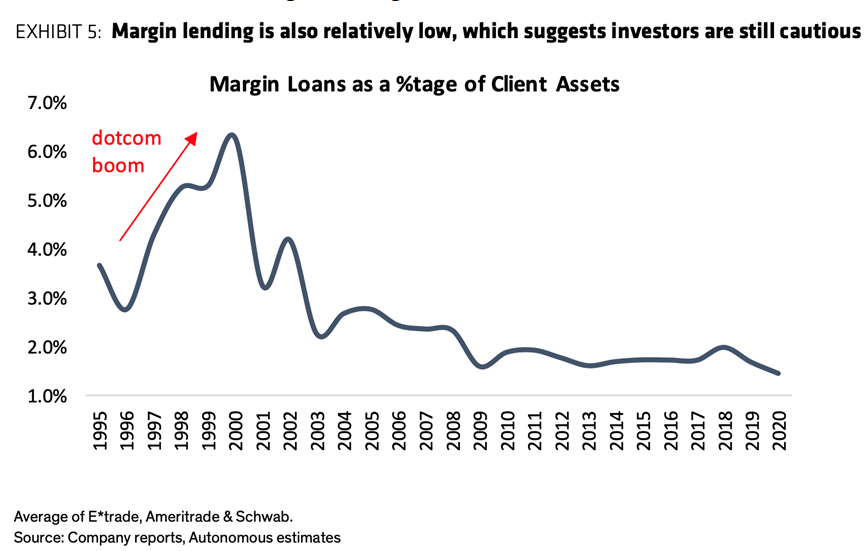 On a relative basis, margin debt has consistently stayed between 1% - 2% of client assets since 2003. Hence, margin debt has not increased when compared to the assets that margin debt is supporting. This is in sharp contrast to the late 1990s when margin lending exploded.

Second, the amount of margin debt should intuitively rise and fall with the stock market because investors want to own more stocks in a rising market and less in a weak one. However, nothing in the chart above indicates that there is even an ounce of predictive power in the orange line versus the blue. If there was, there would be a visible lag between the two lines or statistical relationship hidden in the data.

This story never seems to go away, so the next time the market hits another all-time high, just remember that margin debt is only concerning when it rises faster than the size of the assets it supports.

During the dot-com craze, investors were buying stocks because they believed (incorrectly) that the fundamentals of those companies would catch up over time. Meaning, investors were overly euphoric about the future prospects of dot-com companies versus treating them as slot machines. While it may sound like splitting hairs, these are very different.

Meme stocks are not popular because of hopes of a turnaround (at least not to this degree) or some expectation they will change the world. Some are short squeezes, while others are presumably interesting because traders find the ticker symbol amusing (like NAKD). That’s why, despite the media attention, they have failed to garner much demand outside of chatrooms. But this is admittedly a subjective view, so let’s take a look at the data for a more objective analysis.

In April 2000, right around the time the dot-com bubble burst, here are just a few of the companies that were trading at valuations that look like typos4:

Below are some of the more notable meme stock as of January 29th:

Demand for these meme stocks is an order of magnitude lower than hot stocks back in 2000 because there’s a big difference between euphoria fueled on “this company is going to change the world” versus “haha this ticker sounds like ‘naked’.” This is not 2000. It’s not even close.

Meme stocks have gained so much attention that even the fearless leaders in D.C. are now getting involved. Newly appointed Treasury Secretary Janet Yellen announced this week that the GameStop volatility may warrant “further action”5. Ted Cruz and Alexandria Ocasio-Cortez rarely agree on much, but they appear to support each other’s criticisms on Robinhood and other brokers’ decisions to suspend trading in meme stocks last week (even though the regulators were the real culprits)6.

In any event, there will most likely be congressional hearings to give other politicians with zero knowledge and/or experience in financial markets the opportunity to go on record. But it’s doubtful that any legislation will result from the impeding circus. This will be a story about symbolism for politicians. That’s it.

Books will be written about meme stocks, and classes will be taught at top business schools for decades to come. Professors will opine on what caused this to happen in an age when investment education has never been more readily available.

But these new classes will also change nothing. The roots of this mania lie in human behavior, and nothing will alter the madness of people. Rich or poor, smart or dumb, it doesn’t matter.

We are all hardwired to feel the rush of victory and the agony of defeat. Some can just control these urges better than others.

The bottom line is that there is no canary in the coal mine. This is a fad, and like every other investment fad, it won’t last.

This material has been prepared for informational purposes only and should not be construed as a solicitation to effect, or attempt to effect, either transactions in securities or the rendering of personalized investment advice. This material is not intended to provide, and should not be relied on for tax, legal, investment, accounting, or other financial advice. Richard W. Paul & Associates, LLC does not provide tax, legal, investment, or accounting advice. You should consult your own tax, legal, financial, and accounting advisors before engaging in any transaction. Asset allocation and diversification do not guarantee a profit or protect against a loss. All references to potential future developments or outcomes are strictly the views and opinions of Richard W. Paul & Associates, LLC and in no way promise, guarantee, or seek to predict with any certainty what may or may not occur in various economies and investment markets. Past performance is not necessarily indicative of future performance.