While GameStop, digital art auctioning for $69 million, and so many other shocking stories consumed the news during the first quarter, most were myopic and will likely become irrelevant by the end of the year. Therefore, let’s look at three recent trends that are far more important to investors.

The March jobs report was equally impressive – netting 916,000 new jobs (versus expectations at 675,000)1. In fact, it’s hard to look at the employment data and see anything other than robust growth. But we still have a long way to go. Even in the most optimistic scenario, full employment is likely more than 18 months away.

Second, the amount of money sloshing around is unprecedented. Combine the trillions sitting in bank accounts with the most recent government spending. Then add in the potential for infrastructure spending and it’s a recipe for a massive tailwind to push an already growing economy into high gear.

Third, the chart below shows that the path towards herd immunity in the U.S. continues to beat even some of the most optimistic expectations. As more people get vaccinated, these economic data should continue to improve.

Overall, the economy appears to be chugging along nicely, and vaccinations and government spending have paved the way for economic growth estimates that we haven’t seen since post World War II era.

The first quarter was a “best of times” and “worst of times” scenario for diversified investors. Beginning with the latter, bonds got hammered as the vaccine rollout, inflation fears, and even more government spending fueled a rotation from bonds to stocks. This “risk on” trade (selling safer investments to buy riskier ones) hit Treasuries the hardest because they are the safest of all bonds. The yield on the benchmark 10-year U.S. Treasury rose roughly 80 basis points in the first quarter, which is the third-largest gain in a 3-month period over the past decade2. Bond prices fall when yields rise, so this led to one of the worst quarters for bonds in years and confirmed many of the concerns we’ve expressed since last year.

Equities benefitted greatly, as many indices reached all-time highs. However, the rally was uneven, as technology and other high growth sectors endured extreme volatility in late February. Traders rotated out of growth and into financials, energy, and other cyclical sectors that were left behind in last year’s rally. These sectors also tend to perform well during the early stages of an economic expansion.

Another popular belief was that the tech selloff was due to the rising 10-year Treasury yield. The theory went that as the yield rises, the future value of technology company cash flows falls. In a year when we’ve seen prices for “meme” stocks, rare sneakers, and non-fungible tokens soar to stratospheric levels, this explanation seemed far too technical for us to believe. Instead, we felt this was just another emotional reaction by traders and likely to be short lived.

Think about it this way. It’s unlikely that a rising 10-year Treasury yield could impact tech company fundamentals to the degree of what we saw last quarter. Most aren’t capital-intensive businesses that rely on cheap debt to maintain profitability. Nor would it be realistic to think that a higher benchmark yield would somehow convince programmers to leave Silicon Valley to become a roughneck on an oil rig.

But don’t take my word for it. Jim Grant, editor of the very closely followed Grant’s Interest Rate Observer, said it best:

"To suppose that the value of a common stock is determined purely by a corporation's earnings discounted by the relevant interest rates and adjusted for the marginal tax rate is to forget that people have burned witches, gone to war on a whim, risen to the defense of Joseph Stalin and believed Orson Welles when he told them over the radio that the Martians had landed.” 3

Gold is worth briefly mentioning because it got rocked (pun intended). What is regarded as an inflation hedge fell over 10% last quarter and over 17% since it’s high back in August 20202. This implies that there are bigger forces at play, and Jim Grant’s thoughts on gold may also explain what’s going on:

"To me the gold price takes the form of a very uncomplicated formula, and all you have to do is divide one by 'n.' And 'n', I'm glad you ask, 'n' is the world's trust in the institution of paper money and in the capacity of people like Ben Bernanke to manage it. So, the smaller 'n', the bigger the price. One divided by a receding number is the definition of a bull market.” 3

If Mr. Grant is right, and I think he is, investors are becoming less worried about central banks making policy mistakes and screwing up this post-pandemic recovery. If so, it’s yet another leg to this “risk on” trade and may be causing investors to question this shiny pet rock when compared to the long-term value-creating capabilities of equities. As the saying goes, “There Is No Alternative” to stocks (TINA).

Despite the drama of the first quarter, our long-term view of the economy and assets that derive their value from it remains unchanged. However, we are closely watching five market trends that could impact these views.

The first is the yield on the 10-year Treasury bond. Its recent rise has caught our attention, and while rising yields are almost always a sign of a strengthening economy, the Fed’s current monetary policy could fuel unintended consequences.

The second is infrastructure because properly allocated infrastructure spending could be enormously beneficial over the next half century. Don’t just fix the potholes. Fix the deficient bridges in the chart below. Update the software that lands airplanes. Our country could earn a massive return on its investment, and this is the closest our fearless leaders have come to pushing a bill through Congress in decades. However, this is nowhere close to a slam dunk, so it’s going to be interesting to watch this play out. 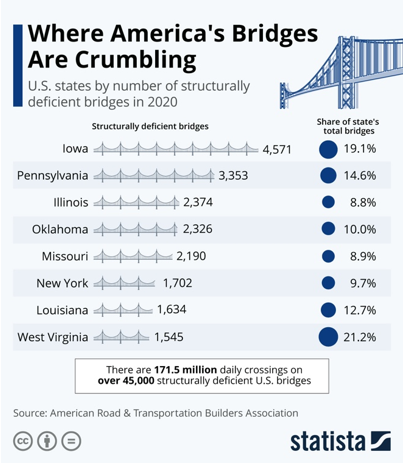 The third trend is inflation. In March, inflation rose by the most since June 20094, adding on to already sizeable increases in January and February. Much like rising interest rates, inflation is often a sign of a healthy economy. But there is a limit to how much inflation investors can stomach before they start to fret about a return to disco balls, bell bottoms, and 1970s style inflation. While this risk is quite low for the next few years, it also cannot be ignored.

The fourth trend is housing prices relative to rents. Since the U.S. economy is 70% consumer spending2, financial asset prices matter a lot because they impact consumer confidence (a more confident consumer spends more money). Housing prices have soared over the last year, but it’s also a potential indicator of population trends. For example, the mass migration out of cities, where renting is more common, could impact sectors and geographies differently if it were to persist.

The fifth trend is the bond market’s reaction to future government spending. Most of this will be funded with new debt creation, and that’s going to be a lot of new supply being dumped on an already saturated bond market. It’s no different than dousing a towel with water. There’s only so much that can be absorbed, and if too much is poured on top, the spillover effect could impact more than just bond prices.

But none of these trends should be viewed as warranting a course correction. At least not yet. We still appear to be entering what could be one of the greatest periods of economic growth in our nation’s history. But as we’ve already warned ad nauseum, this doesn’t imply it will be smooth sailing from here. Last quarter taught us that this ride will be uncomfortable from time to time because there is no free lunch.

The bottom line is that quarters like these are the price investors must pay to position themselves for the potential fruits of this economic expansion, and we urge investors to remain focused on the long-term and ignore these air pockets along the way. Thank you for your continued support.