The first quarter was one of the most challenging in decades. There was almost nowhere to hide, and those who remained disciplined and diversified were mostly rewarded with paper losses.

But it’s only been three months, and despite record-high inflation, a major shift in monetary policy, and a horrifying invasion of Ukraine, the data indicate that the U.S. economy is strong and continues to grow.

It’s hard to say when this growth will get reflected in asset prices, but history has shown that some of the best opportunities for patient investors are when the data is strong and prices are pressured.

Let’s start by addressing the elephant in the room. Inflation came in at an annualized rate of 8.5% in March - the highest it’s been since December 19801. For scale, anyone who’s salary remains constant just worked one month for free over the last year (one month divided by twelve equals the current rate of inflation). 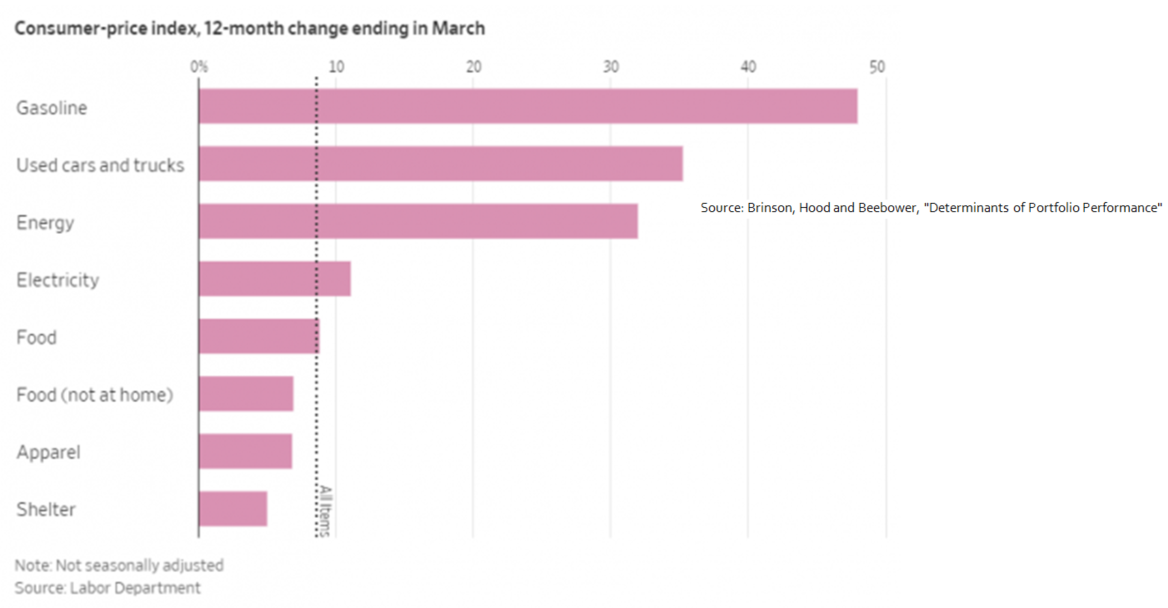 Meaning, it’s likely that inflation has peaked or is about to peak. By the end of the year, we wouldn’t be surprised to see headline inflation settle in around 5-6%. That’s a far cry from the 2% average over the last two decades prior the government-mandated shutdown of the economy, but it’s also a lot less than right now. Any lower would likely require a reduction in the money supply, and the political hurdles surrounding taking money out of the system appear insurmountably high.

Inflation is a problem, but there are signs that it could be abating. Strip away energy and food (“core inflation”) and the story changes. Not only is core inflation materially lower than the headline number, but it’s also decelerating. This matters a lot because food and energy, while clearly important to most consumers’ budgets, is quite volatile (extremes tend to lead to extremes in the opposite direction and over time cancel each other out).

But it’s not all bad. Inflation is a headwind, but there are several tailwinds pushing the economy forward. For starters, unemployment is at a multi-decade low, wage growth is at a multi-decade high, and there are still millions of jobs out there unfilled. These are just some of the reasons why retail sales have remained robust in the face of so much turmoil this year. Add to these tailwinds the savings accumulated over the last two years, and consumers have a multi-trillion dollar buffer to help ease inflation woes.

Speaking of buffers, banks also have trillions of “excess reserves” sitting in their vaults. This is cash above and beyond what is needed to run their business and appease regulators. This excess cash combined with a regulatory environment that encourages lending has made access to capital as good as it’s ever been. Since most houses, equipment, and other large purchases involve a loan, the economy does better when banks want to lend.

Add it all up and the economy remains in an expansion phase, but it’s not growing like it did last year. And that’s ok. We’ll take slow and steady any day of the week and twice on Sunday over artificial growth fueled by government manipulation.

The table below shows that asset class selection explains over 93% of long-term performance. Security Selection, or “stock picking,” is somewhat additive, but without the asset allocation in place, it’s an uphill battle. Market timing is a waste of time.

It’s no different than those three sacred rules in real estate. Pick good locations and you’re probably going to do ok. The challenge with the first quarter was that finding good neighborhoods was as hard as it’s been in years. 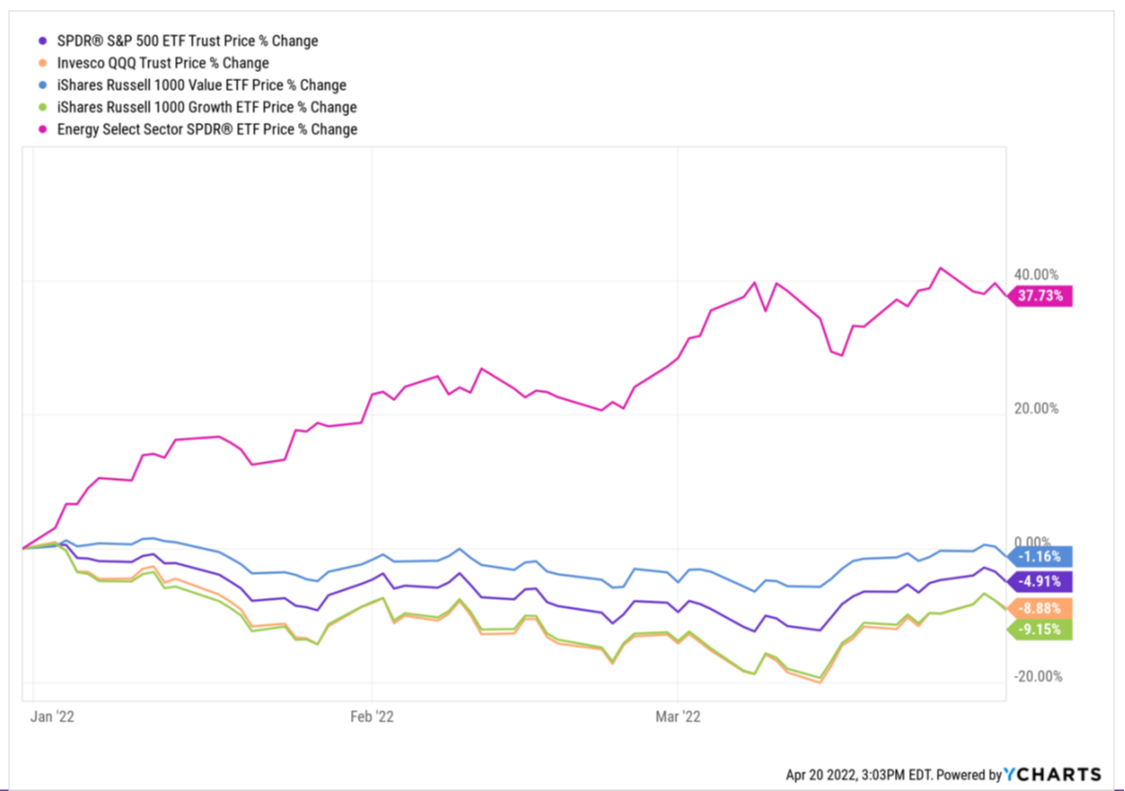 Equities couldn’t seem to catch a break. Fears of rising interest rates, inflation, and then an unthinkable invasion of Ukraine fueled fears that a recession was imminent. The chart above shows that there was almost nowhere to hide unless one were to break the sacred rule of diversification.

For example, heavily overweighting the energy sector (magenta line) or rolling the dice on a handful of stocks could have paid off nicely, but we don’t play that game. The risk to long-term goals is too high to concentrate a portfolio down to a few stocks or try to time a commodity trade.

While stocks tend to get most of the attention, the carnage that ensued in the bond market in the first quarter was the worst inflicted since the 1970s. The chart below contextualizes the pain by illustrating the drawdown in the “safest” corner of the bond market – U.S. Treasury bonds. 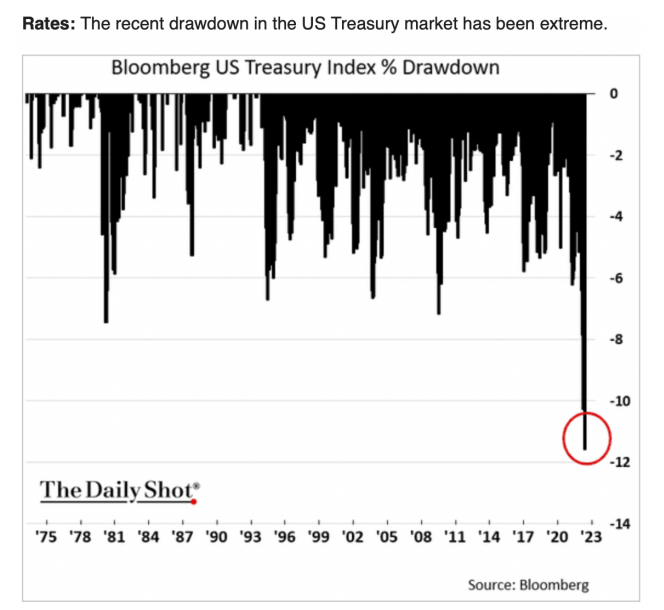 One of the very few bright spots was gold. It returned just over 5% and dampened some of the volatility in our diversified strategies. However, we see no reason to back up the truck here either. Gold has historically been more volatile than the S&P 500 with a lower average annual return2. Hence, we will continue to view this strictly as a diversification tool.

Simply put, the first quarter was one of those rare times when diversification came into question because ignoring it was pretty much the only way to end in the black. However, we manage strategies that are designed to play out over several years, so a few months of stocks, bonds, and most other asset classes falling together isn’t enough for us to break our discipline or deviate from the fundamentals.

The Federal Reserve is the most powerful financial force in the known universe, and for the last two years, they supported asset prices in an unprecedented way. In effect, their presence “de-risked” assets because the Fed stood ready to ensure prices didn’t fall too far, too fast.

But those days are now well in the rearview mirror. The Fed is reversing a monetary policy that should have been wound down over a year ago, and we’re likely to keep feeling the effects for some time. Volatility like this can test the resolve of even the most patient investor, especially when it’s been absent for so long.

In times like these, we look at the data to maintain perspective:

Weigh the good against the bad, and we continue to see opportunity for investors over the next 12-18 months. Past that, it’s hard to say because the Fed’s track record on bringing down inflation while avoiding a recession (“soft landing”) isn’t exemplary.

Therefore, we will continue to target small, migratory moves that attempt to keep us ahead of economic and market shifts. For example, we first began talking about inflation in May 2020, and we made moves in our portfolio over several months to prepare for rising prices. Earlier this year, we transitioned out of Europe and emerging markets to de-risk as the geopolitical events that were percolating signaled prudence. We also shifted some of our allocation from growth stocks to value stocks because our algorithms that continually watch the undercurrents in markets told us that the tide was turning.

But what we didn’t do at any point was make a huge bet one way or the other. Meaning, as inflation began to rise, we didn’t sell all assets that are sensitive to higher prices. Nor did we dump all stocks because Russia invaded Ukraine. That’s not our style because big, bold moves like those are incredibly difficult to recover from when you’re wrong.

The bottom line is that the economic tailwinds appear stronger and should last longer than headwinds like inflation and geopolitical concerns. But this could change, so we will continue to slowly adjust our portfolios based on the data and our assessment of where markets offer opportunity. Thank you for your continued support.