The first three quarters for stocks and bonds were collectively the worst since 1931. The Federal Reserve has also made it clear that they don’t want these markets recovering until inflation falls, and it’s hard to fight the Fed.

Unsurprisingly, investor sentiment is close to all-time lows. The future appears to be in the hands of central bankers, and it’s little surprise why so much of the world has lost faith in them (if there ever was any to begin with).

But long-term investors do best when bears are in charge. Leading indicators also suggest that inflation could slow in the coming months, and with immense political pressure weighing on the Fed, could they pivot?

The chart below from Piper Sandler depicts their roadmap for how the economy responds to changes in interest rates1. Housing slows first, followed by new Orders and then Profits. Employment soft­­­ens last. 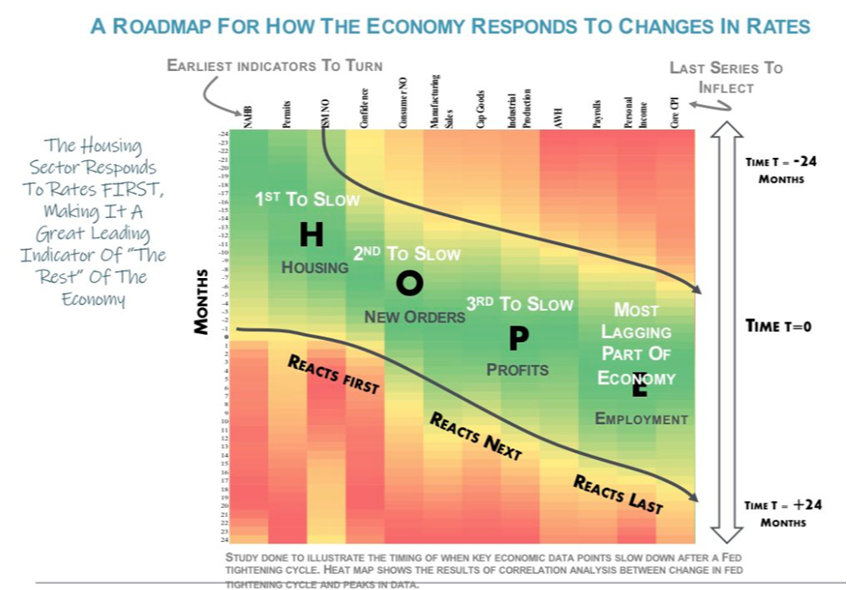 This cycle is consistent because as mortgage rates rise, housing becomes less affordable. Many economists believe housing is the economy because buying a house means spending money on that house2. Fewer transactions lead to reduced spending on plumbers, concrete, etc.

Spending then takes a further hit as rates for car loans and other big-ticket items adjust. Lower consumer demand leads to smaller orders to replenish shelves. This eventually makes its way to the bottom line for corporations. Falling sales put pressure on profits, so they cut costs. Employees tend to be one of the biggest expenses for companies, so the workforce gets reduced.

Let’s apply this methodology to today’s economy to see where we stand.

Housing has been in a recession for months. A 30-year fixed mortgage on a $600,000 home at a 2.6% interest rate last year would have the same monthly mortgage payment as a $392,000 home at September’s 6.2% interest rate. But there are virtually no signs of a bust. Lending standards and lack of supply for homes should help control this slowdown better than after the financial crisis.

The ISM Manufacturing New Orders Index was down 8.2% in September from the prior month and 29.4% from one year ago. Companies ordered too much inventory last year and are now paying the price. That’s why coupons and sales seem to be picking up

Profits are also starting to weaken. Walmart, Target, Nike, Federal Express, and a litany of other major retailers are saying the same thing – revenues are down, and the outlook is bleak. Third-quarter earnings begin next week, and we expect this trend to continue.

Employment is last to slow, and there are signs that the job market is beginning to soften. Reports of layoffs and hiring freezes are daily occurrences. At the beginning of the quarter, two jobs were available for every person looking. Today, there are 1.6 jobs3. That’s a big move in three months. The share of people quitting their jobs has also decreased steadily since December4.

Simply put, the economy is showing signs of slowing down, and this is good. The more data like this the Fed can digest, the better the chances they pump the brakes on raising their target interest rate.

There is no shortage of statistics about just how bad markets have been this year. Here are just a few5:

Charts like these further drive home the point. The first suggests that global bonds are having their 4th worst year ever, going back to 1700. The second is the relative performance in the third quarter6. 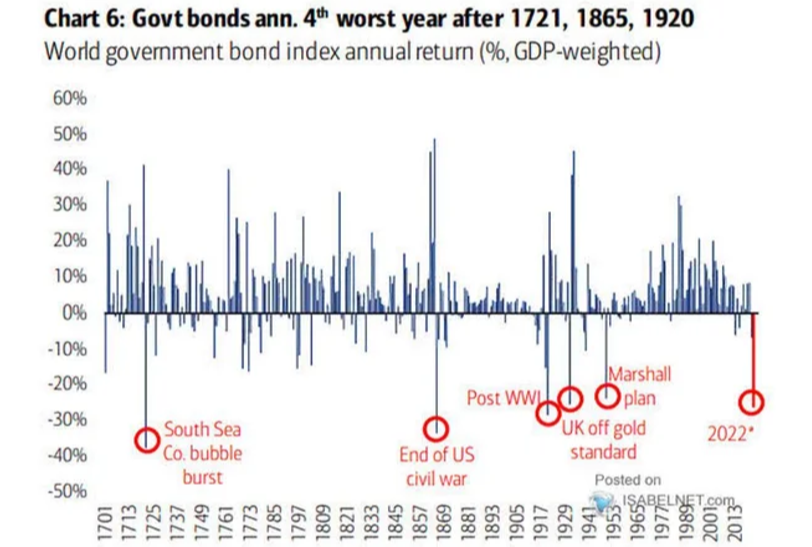 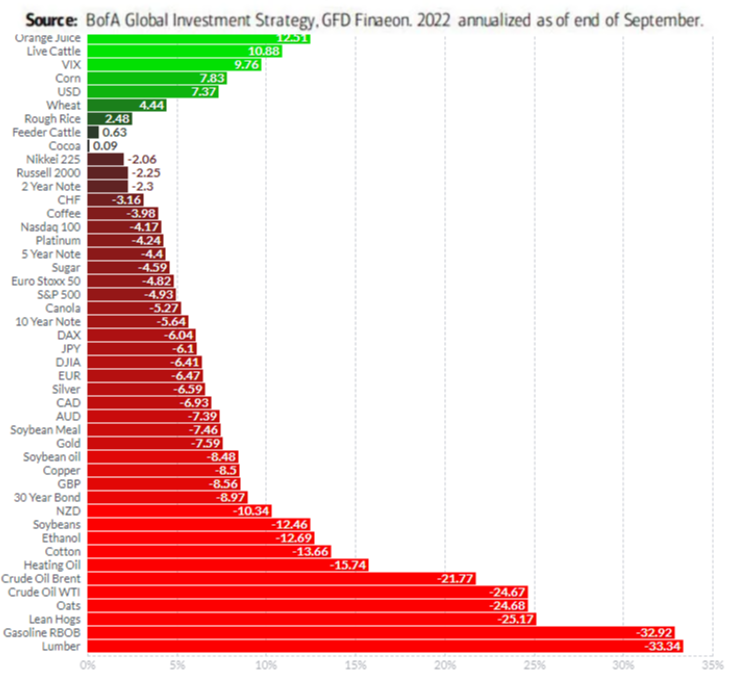 Investor sentiment indicators are also as bad as ever. Bears outnumbered bulls by over 43% in a recent and closely followed survey7. With data going back 35 years, it’s only been worse twice.

While these stats may sound even scarier than hearing that the economy is slowing down, history teaches us that fear is good for long-term investors. That’s not to say stocks and bonds are immune to more pain, but rather that the opportunity today looks much better than it did back in January.

But what could be the most interesting market to discuss, and not-so-shockingly the one getting the least amount of media attention, is commodities. The table below shows that most major commodities appear to have peaked8. 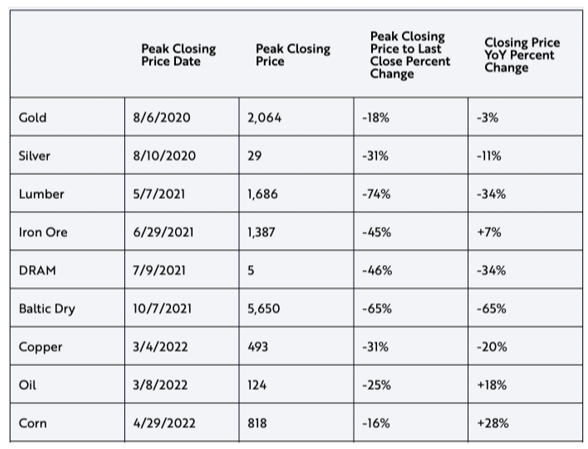 Commodity prices are important during inflationary periods because they are leading indicators (inflation reports like the one this week are lagging and subsequently less helpful). These are inputs into production; if commodity prices are coming down, they should alleviate pricing pressure on consumers.

But assessing when that could happen is hard. Inflation is notoriously sticky, and commodity prices won’t do much for rising rents and wages.

It’s strange to think that so much is riding on the Fed’s projected path for inflation, but that’s where we stand today. They will almost certainly raise their target interest rate by another 0.75% in November and at least 0.50% in December. Next year is harder to handicap, but we’ll likely see a hike in February (maybe 0.25%).

We’ve been highly critical of the Fed’s decisions since early 2021, and it appears that more prominent names have joined our side. Last week, the United Nations called out the Fed and other central banks to halt interest rate hikes. We don’t see it here, but the strong dollar is wreaking havoc on the rest of the world.

This week, the International Monetary Fund lowered its growth projections for the global economy, celebrity portfolio manager Cathie Wood issued a scathing open letter to the Fed, and even celebrity CEO, Jamie Dimon, came out with his prediction that we could be in for more pain next year. Combine the media attention with what must be coming from the Democratic Party weeks before midterm elections, and we wonder if the Fed has it in them to keep hiking.

Central banker or not, we’re all human. Australia’s central bank raised its target rate by less than expected last week. Could the pressure be getting to them already? The U.K.’s financial system is under so much pressure that the Bank of England is at odds with the new Prime Minister and going to extreme measures to prevent pension funds from blowing up. The Fed may be lost, but they aren’t blind. Could they blink?

It's happened before. In 2019, the Fed cut rates because the economy experienced the equivalent of a low-grade paper cut. Granted inflation wasn’t a problem back then, but talk is cheap. They may sound tough today, but whether or not the Fed has the fortitude to drive the country into a recession remains suspect to us.

But we are conservative investors and therefore must assume that a recession will happen sometime next year. If so, the country has never been better prepared. Personal and corporate balance sheets are stronger than ever, and operating margins and cash flow appear to be higher and of better quality.

Furthermore, the equity market tends to anticipate the economy by 6 to 9 months, and bear markets tend to last around 11.4 months. If these averages hold, that implies (1) we could already be more than halfway through the bear market, and (2) the recovery in asset prices should begin months before the depths of any economic downturn – recession or not.

These make any dramatic move to cash even riskier today than earlier in the year. Factor in taxes and the impossible task of timing the recovery, and we continue to firmly believe the best course of action is to stay invested but also remain active in our asset allocation.

Some examples include shortening duration when possible, underweighting international equities (particularly Europe), and incorporating alternative sources for potential return and hedges against risks that surface over time.

The bottom line is that it’s all about the Fed. Nothing else matters right now. It’s a frustrating place to be, but that’s the hand the world has been dealt. Thank you for your continued support during one of the most challenging periods in history.