Reading Below The Obituaries

Dogecoin is a cryptocurrency that was created as a joke in 2013. It is named after an internet meme of a Shiba Inu dog that can’t spell well. For all intents and purposes, it was expected to do little more than get a few laughs from the crypto community.

But all of this changed after Elon Musk tweeted his admiration for dogecoin earlier this week. Snoop Dogg and Gene Simmons also joined the party, and the resulting hype pushed the value of dogecoin above $10 billion – making it worth more than Xerox and Western Union1.

The media attention on dogecoin’s recent spike has elevated it to “meme stock” status. Pundits on television are opining, Robinhood now offers the ability to trade dogecoin via its app, and online chatrooms are on fire with wild predictions for this crypto’s future.

While stories like these are certainly amusing (arguably shocking), they are also myopic and irrelevant. Six months from now, it’s unlikely any of these hot topics will be anything more than a distant memory. Therefore, let’s look at three recent trends that aren’t getting much media attention but are far more important to investors.

Data indicate that COVID may very well be on its way out as the U.S. progresses towards “herd immunity.” This is the threshold where the virus will no longer be able to transmit effectively because too many people are immune. The medical community believes this to be around 70% of the population. However, this is not an on-off switch. As immunity rises, there is a proportional effect. For example, reaching 35% immunity should halve transmission.

Daily cases and hospitalizations are down 57% and 36% respectively since the peak about four weeks ago2. This trend will likely continue as more Americans develop antibodies.  Estimating this number requires adding up infections and vaccinations. The number of positive tests in the U.S. is currently 27 million2. The CDC estimates that testing only finds about one out of every four infections because most people infected don’t get tested. If this is accurate, then over 100 million Americans have antibodies from prior infection6.

While there has been much criticism on the vaccine rollout in the U.S., it’s hard to find a country that is doing better at this scale. The U.S. is averaging around 1.5 million vaccinations every day. Cumulatively, around 44 million Americans have received the first shot and 10 million have gotten two doses5. That means 34 million people have some level of immunity in the first few weeks of rollout, which is approximately 10% of the U.S. population.

It’s also worth mentioning that despite the media’s relentless focus on one-off stories of reinfection and antibody ineffectiveness, the data show the exact opposite. Medical studies have proven that immunity lasts at least six months3. This is most likely a conservative estimate simply because most studies use conservative assumptions. Furthermore, there are currently 100 million confirmed cases worldwide, but only 47 confirmed cases of reinfection4.

Add 100 million with antibodies from infection to those vaccinated, and the chart below shows that roughly 40% of the U.S. population has antibodies6. Even if this estimate is off by 10%, the transmission rate is still falling and likely explains the drop in COVID numbers over the past month. 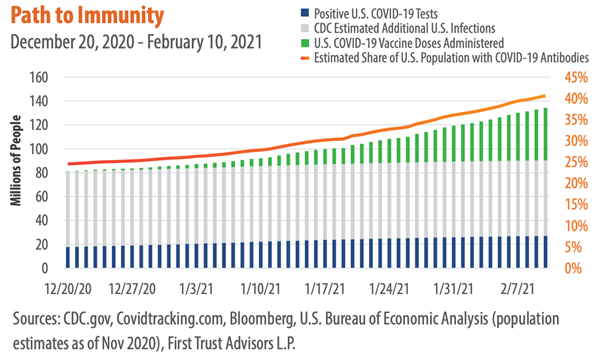 Said another way, the worst of COVID appears to be in the rear-view mirror. If so, this could be a massive tailwind for the U.S. economy over the next 18 months.

Economic activity fuels corporate earnings, and earnings drive stock prices over the long run. As of February 5th, approximately 60% of companies in the S&P 500 reported fourth quarter earnings for 2020. Of these, 81% beat Wall Street expectations. If this is the final percentage for the quarter, it will tie for the second-highest percentage of S&P 500 companies reporting a positive earnings surprise since 20087.

Companies aren’t just beating expectations either, they are blowing them away. On average, companies are reporting earnings that are 15% above Wall Street estimates, which is above the 5-year average of 6.3%. If 15% is the final number for the fourth quarter, it will be the third-largest earnings surprise percentage since 20087. This data challenges the media’s portrayal of a broken economy, and corporate earnings are primed to surge even higher once consumer start consuming again.

The American consumer in aggregate is in the best financial shape in modern history. Private wages and incomes are at all-time highs8, debt affordability is at an all-time low9, and there has never been this much cash sitting in bank accounts10. Since consumer spending fuels 70% of economic growth, a windfall of profits could be headed corporate America’s way over the next 24 months as these caged animals leave their homes and start spending again.

Additional stimulus will only add more fuel to this fire. More checks in the mail means more cash available for future spending. If stimulus is earmarked to create jobs and improve infrastructure (investing in the country’s future), the economic benefit could be even more substantial.

Simply put, this year is shaping up to be one of the best ever for corporate earnings.

There Is No Alternative

Junk bonds offer higher yields to compensate for the credit risk associated with companies that have shakier financials. As of February 8th, the average yield on U.S. junk bonds dropped below 4% for the first time ever11. Since bond prices rise as yields fall, the average junk bond price is currently the highest it’s ever been.

To be clear, this means that investors are willing to accept a material risk of default to earn less than 4% on a loan. Given inflation is not much lower, it’s shocking to see investors willing to take this risk for the potential of such meager returns. Yet, here’s an excerpt from a Bloomberg article this week11:

“Demand for the debt has outweighed supply by so much that some money managers are even calling companies to press them to borrow instead of waiting for deals to come their way. A majority of new issues, even those rated in the riskiest CCC tier of junk, have been hugely oversubscribed.”

While a recovering economy tends to be good for junk bonds (a growing economy reduces risk of default), it can’t on its own explain this type of demand.

But monetary policy can. When the Federal Reserve (Fed) pushed short-term interest rates to zero and began buying trillions in bonds, they manipulated financial gravity. Since it’s highly unlikely that the Fed will reverse course anytime soon, expect more stories like these over the coming years.

But monetary policy can. When the Federal Reserve (Fed) pushed short-term interest rates to zero and began buying trillions in bonds, they manipulated financial gravity. Since it’s highly unlikely that the Fed will reverse course anytime soon, expect more stories like these over the coming years.

There’s no question that the longer committees control interest rates, the more uncertainty investors will face. Stories of corporate treasuries being diversified into crypto is just the beginning. But there is also a lot of certainty that comes with artificial interest rates. One such example is a strong foundation for future stock prices since bonds and cash returns appear to be quite limited going forward.

These trends aren’t getting a lot of airtime because they don’t benefit the media. They don’t want the biggest story in a century to end, so it’s better to just sweep any progress towards herd immunity under the rug. Corporate earnings are way too boring to replace the excitement of meme stocks, and no advertiser wants to be placed during a segment on the bond market.

That’s why most of these stories get printed on page 8, right after the obituaries. They simply cannot compete against the drama of brave, everyday investors sitting at home and trading on margin to take down evil hedge funds.

Another glaring issue with these trends is that they are inherently optimistic (unless you’re sitting in too much cash and bonds). There have been countless studies that show the one thing the media can’t stand is optimism12. It’s too bad because optimism pays better over time since stocks historically rise way more often than fall. In fact, the total return in the S&P 500 over the last 90 years is 9.9%13.

However, this in no way implies that investors should ignore negativity. No matter how good things are, recognize risks and incorporate them into any analysis. Just be sure to be realistic about the severity and timing of risk.

For example, stimulus spending is a lot like swiping a credit card. Happiness today comes at a price when the bill has to get paid. But the differences are that the interest rate on stimulus is miniscule, and it won’t have to be repaid for several decades. Therefore, when pundits talk about future generations being burdened with this debt, they are probably right. But it’s also just as likely that stimulus could be a massive tailwind for investors today, and it would be a shame to sit on the sidelines because of a perceived risk that is well beyond any investment horizon.

The bottom line is that the media isn’t interested in getting you to your financial goals. They are here to do one thing and one thing only, and that is to tell sensational stories that will hopefully keep you entertained enough to not change the channel during commercial breaks.