Are Taxes Going Up?

Tax policy has taken center stage in the final days before the U.S. presidential election. The polls show Biden with a commanding lead, and many investors fear this will result in higher taxes. However, there are four hurdles facing Biden’s proposed tax plan, and none of them will be easy to overcome.

As of mid-October, Trump was roughly two points lower in the polls than he was versus Hillary Clinton1. However, the chart below shows that Trump was actually polling a bit better than in 2016 in battleground states (Trump is doing better when the blue line is in positive territory and worse when in negative territory). Presidential elections are decided by the electoral college and not the popular vote, so this race could be closer than headline numbers imply.

The Democrats need a “blue wave” to get any major tax policy initiatives voted into law. This requires a win in the White House and taking control of Congress. Democrats currently have 47 of the 100 seats in the Senate, so they would need to win big since only a third of the Senate is on the ballot. If not, Republicans will retain control of the Senate and kill any proposed tax increases. 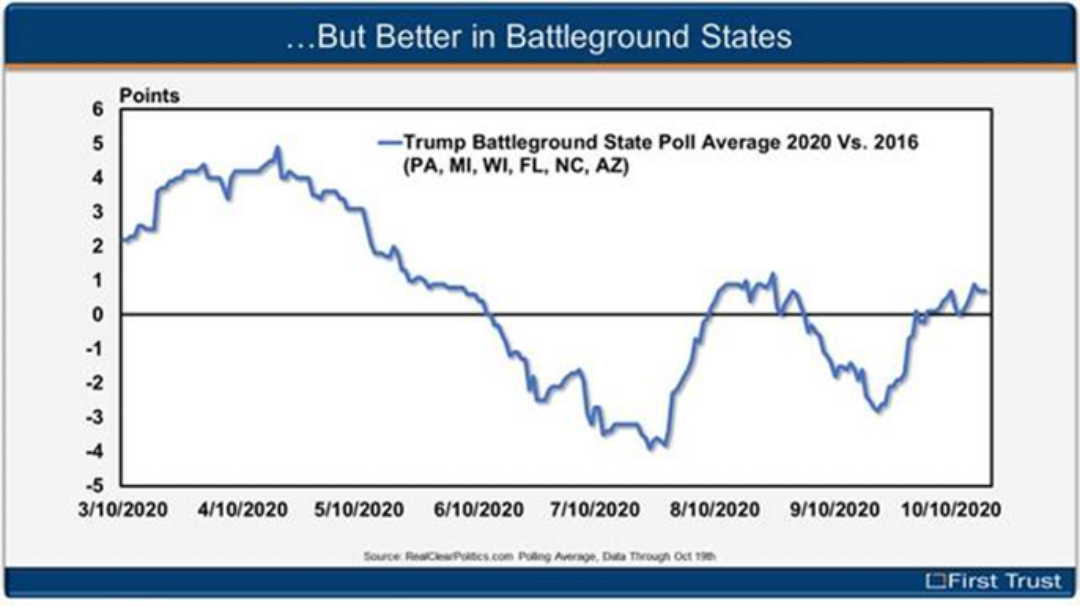 Most tax policy gets through the Senate via “budget reconciliation,” which is a fast-track process for consideration of bills. Instead of the traditional 60-vote minimum, a reconciliation bill only needs a simple majority (51 votes in the Senate)2. Most of Biden’s major tax initiatives would qualify for budget reconciliation. But Democrats will still need to agree on policy changes, and this might not be as easy as it sounds. Moderate Democrats may balk at some of the more progressive taxes, and if so, the Left may not get everything they want.

The timing of the election could also be problematic. If Biden wins, he will spend the first several months building his team and creating his real policy agenda (rarely the same as the campaign agenda). This process takes time, and it’s unlikely that the Senate would vote on much before mid-2021. If so, that puts any vote within the political horizon for Midterm Elections in 2022. Democratic Senators caught in a close race may think twice about doing anything that could risk losing his/her job (no matter how far left they may stand).

Not all of Biden’s proposed tax changes qualify for budget reconciliation. Those that do not must go through the standard Senate process, where 60 votes are needed to avoid the filibuster. This size majority would require more than a blue wave. It would take a “Democratic tsunami” to get that many seats in Congress, and tsunamis don’t happen often in politics.

What Could Get Through?

Let’s dissect Biden’s tax plan to see what could get passed, what probably won’t, and the implications of each. While the plan is extensive, there are five initiatives that could have a material impact on the economy and investors’ wallets.

Biden wants to take the top income tax bracket from 37% to 39.5% for households that earn more than $400,000. If there is a blue wave, this will most likely pass. This could slow economic growth, but the overall impact would likely be minimal. That's where the rate was under Clinton and Obama's second term, and no recession happened in either period. There is little to suggest that this time would be any different.

Furthermore, prior to Trump’s corporate tax reform in 2017, corporations had been taxed at 35% since the mid-1990s. The economy did just fine during that era. The fact that Biden doesn’t want to raise it back to 35% could even be viewed as a glass half-full and a sign that even the Democrats consider 35% to be too high.

While a blue wave would have the votes, it’s unlikely this proposal would pass for two reasons. First, implementing it would border on the impossible - calculating the acquisition cost on older assets that have little or no records would be a guessing game. Second, imagine explaining to your constituents that you voted to wipe out huge chunks of their inheritance. This would go over like a lead balloon, particularly for those who are not already wealthy.

Biden wants to treat capital gains and qualified dividends as ordinary income for those making $1 million or more. It’s difficult to imagine Biden could rally moderate Democrats here because the ripple effects could lead to unintended consequences with little to no ability to forecast. Raising these taxes could also infuriate wealthy donors to their reelection campaigns.

It’s not just the rich who could revolt. Long-term capital gains haven’t been taxed as high as 39.5% since the early years of the Carter administration. Back then, he tried to raise this tax, but the backlash from the middle class was so fierce, he was forced to relent and cut the tax instead3.

Biden also wants to impose the Social Security tax on regular earnings above $400,000. Currently, only the first $137,700 is taxed at 12.4% (split by the employee and employer), and anything above is not taxed. This is aggressive and unlikely to pass for two reasons.

First, it creates a major disincentive for high income earners to stay in high tax states because their effective tax rate could rise as high as 65%. Senators from these states may not want them to leave.

Second, this requires a Democratic tsunami. The “Byrd rule” limits any changes to Social Security through budget reconciliation, so this proposal would have to go through the traditional process in the Senate. Meaning, the Democrats would need 60 votes to avoid the filibuster.

Almost 70% of U.S. economic activity comes from consumer spending4. Add in business spending, and these two represent 88% of the $21 trillion economy4. When money is taken out of the pockets of consumers and corporations, it’s cash that won’t get spent in the economy. Therefore, higher taxes tend to slow, not stop, economic growth.

Biden’s tax agenda, as it stands today, will likely do just that. The economy will probably slow down, but it’s not going to stop the entrepreneurship and innovation that’s fueling the long-term direction of the economy. It’s also not going to convince the Fed to change their monetary policy or cancel plans for fiscal stimulus. In fact, the drivers of the economy and the stock market should remain in place no matter what parts of his tax agenda become law.

Lastly, the more radical tax changes will likely disappear over time because they usually do. These are meant to win elections and to be used in Congressional negotiations. Biden most likely has no expectation that many of his initiatives will even make it to the Senate floor.

The bottom line is the taxes being proposed are a headwind, not an anchor. Even if there is a blue wave, the U.S. economy will be just fine over the long run.