The National Bureau of Economic Research (NBER) officially announced in June that the U.S. economy entered a recession back in February. This marked the end of the 128-month expansion that was the longest in records reaching back to 18541.

This announcement was mostly expected, but what may come as a surprise is that there is ample evidence to suggest that the recession ended back in mid-May. Meaning, roughly one month prior to the NBER making the recession official, it may have already been over. If so, this would not only be the sharpest downturn since the Great Depression but also the shortest.

Let’s examine recent employment data to see why this may be the case. Initial Claims for Unemployment Insurance measures the demand for help from people who have recently lost their jobs. Continuing Claims represents those who have been receiving ongoing assistance. Think of this like a club, where initial claims are the new members and continuing claims are all the members. 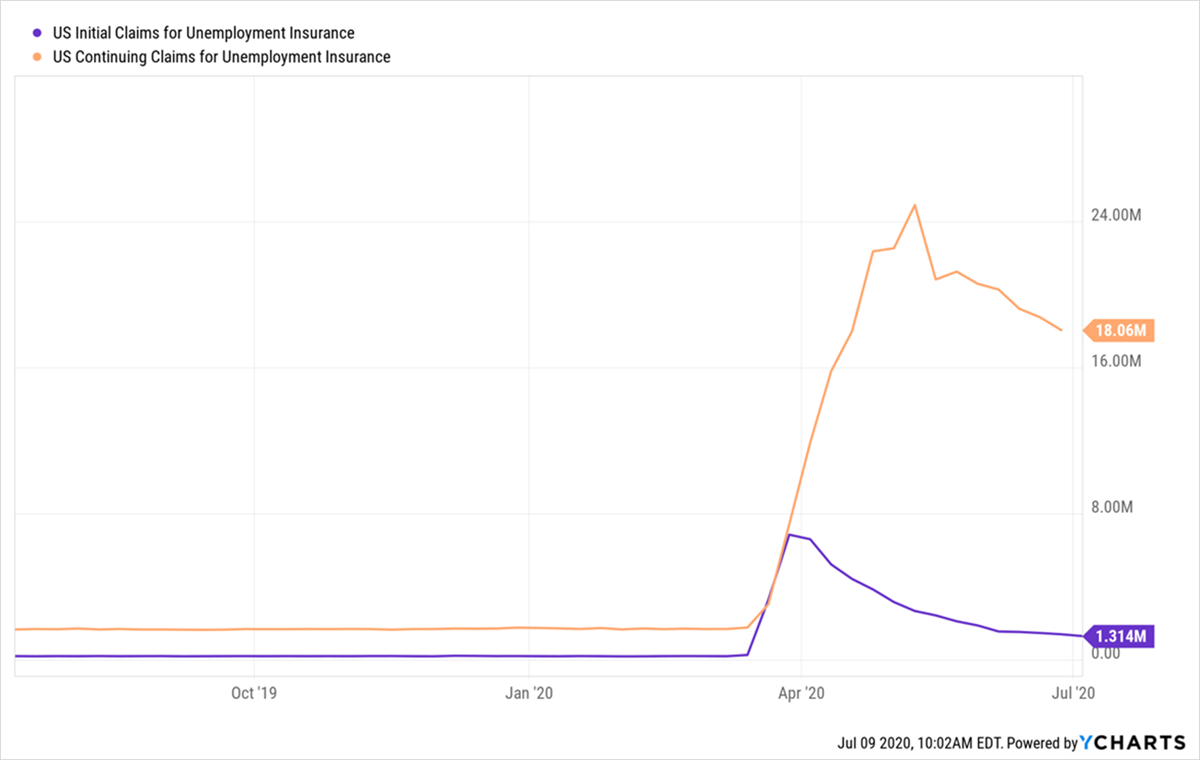 Two things typically need to happen for a recession to end. First, there needs to be a peak in initial claims. The chart below indicates this likely happened somewhere in late April (purple line). It’s important to note that a peak does not indicate everything is back to normal, but rather, that it’s just getting less bad.

Second, there needs to be a peak in continuing claims (orange line). When this number begins to fall, it indicates that the number of people finding new jobs (losing unemployment benefits) is exceeding those who are filing for initial claims.

Said another way, when both peak, it suggests that more people are getting hired than being fired. It can also signal the end of a recession because it lowers the unemployment rate, which should subsequently boost economic activity.

Recent employment reports support this trend. Payrolls have been rising and the unemployment rate has been falling since May. Admittedly, there are a lot of variables that need to be examined to determine the state of the economy. But employment is arguably the most important, and right now it’s telling us that the economy is expanding.

However, it’s important to manage expectations. A recovering economy is not the same as a recovered economy. Getting back to “normal” could be years away, and what has looked like a “V” shape recovery could quickly shift to a jagged edge.

For example, people are traveling way more than they were in March, but the numbers are still down dramatically from last year at this time. Filling up planes and hotel rooms will probably take a lot more than loosening shelter-in-place orders.

The chart below shows that if you just closed your eyes for the first six months of 2020, the stock market wouldn’t look much different than any other semiannual period (it’s that red bar on the far right). 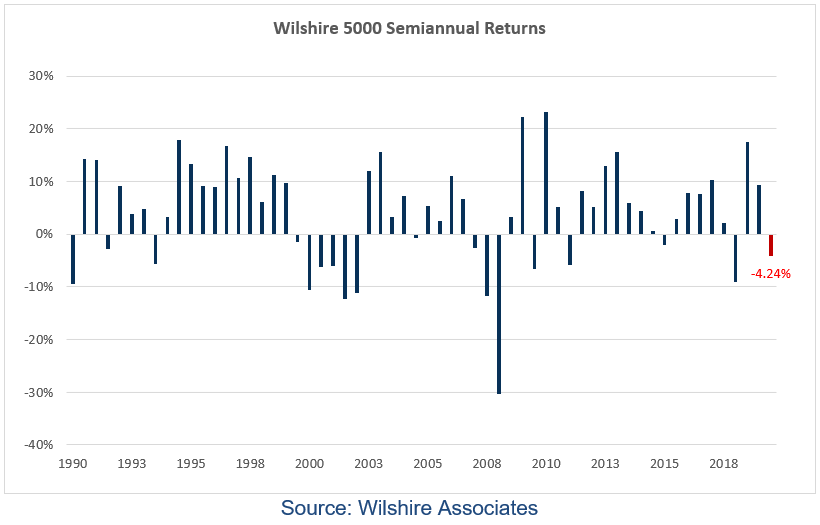 But it was far from normal. The first quarter included the fastest 30% drawdown in history for the S&P 500 – taking only 22 days3. This was followed by a second quarter that was the best on record since 19984. Those interested in numerology might find commentary from Eddy Elfenbein to have a deeper meaning5:

If the recession is over, then we could be in a new bull market for stocks. However, if the economic recovery is not expected to remain a “V” all the way up, investors should mentally prepare for a bumpy ride in the second half of the year (or perhaps just keep those eyes closed).

Quite the opposite, the chart below shows that if you had closed your eyes to the bond market, you would have missed the largest move in the 10-year Treasury yield over the past 30 years. The flight to safety pushed the yield in this critically important benchmark to a record low of 0.54% on March 9th (down from 1.92% at the beginning of the year)2. 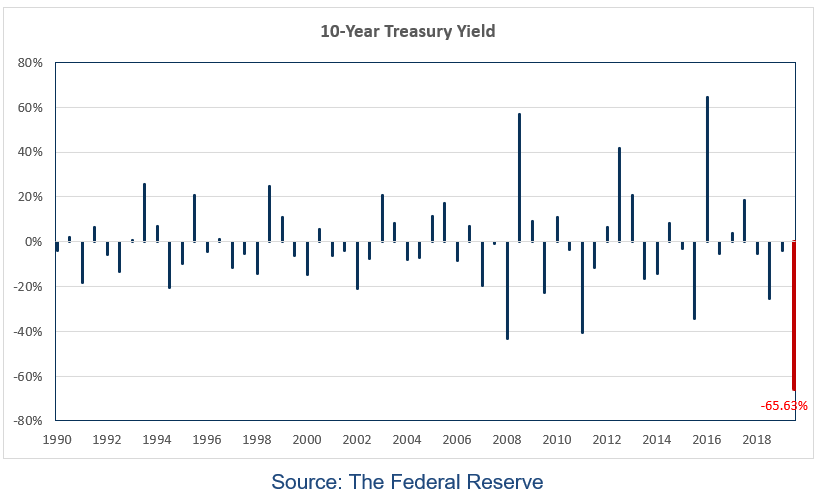 Bond prices rise when yields fall, so this massive drop in interest rates fueled some of the best semiannual returns on record for the bond market. The total return of the Bloomberg Barclays U.S. Aggregate Bond index was 2.8% for the second quarter and 6.2% for the first half of the year2.

The market for new debt issuance was also white hot in the second quarter. Companies that needed to raise cash to get them through these uncertain times were met by an insatiable demand from two sources.

First were lenders who appear to be starved for yield. The chart below shows that over 80% of the developed world’s government bonds yield less than 1%, and close to 30% are yielding below zero. 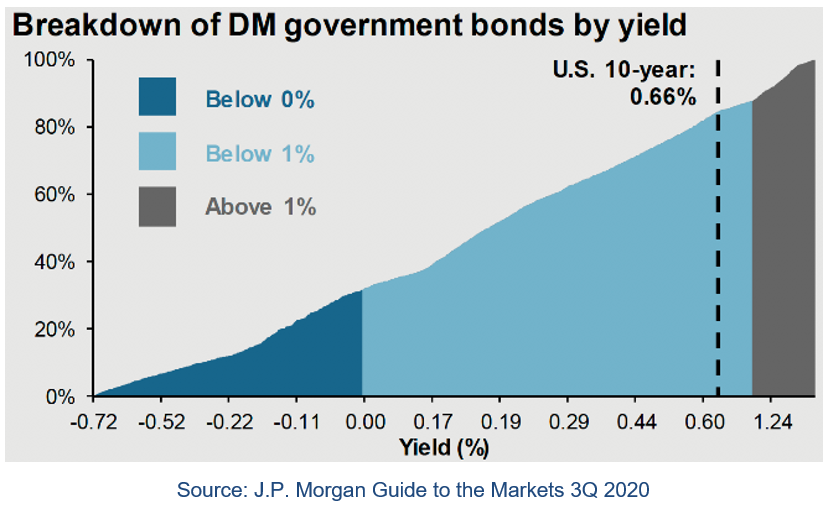 Since these super safe assets can’t beat inflation most of the time, investors seeking income must look to corporate bonds and other riskier investments to pay bills. This is bad for retirees and other “lenders” but great for bond issuers and other “borrowers” that need cheap capital.

The second source of demand came from the Fed, and they supported prices in two ways. First, they offered unprecedented monetary support to keep the plumbing of the financial system intact. Part of this was creating lending facilities for small and large businesses.

Typically, if the Fed wants to make money available, they use J.P. Morgan, Citigroup, and other banks as intermediaries. They give the banks the cash, and the banks make loans to companies and consumers.

But the Fed appeared to be worried that the dysfunction in Congress and bureaucracy of large commercial banks could delay the financial support that was desperately needed during the panic back in March. So, for the first time in history, the Fed bypassed the banks to provide emergency loans to businesses.

Second, they recently began buying individual corporate bonds and Exchange Traded Funds (ETFs). This was another first for the Fed and has now put them in the awkward spot of deciding which companies get their financial support.

Lastly, the landscape for international investment continues to remain challenged. The U.S. is a wealthy country and can afford the record amounts of stimulus, but most developing countries don’t have that luxury. Nor are their currencies as in demand as U.S. dollars.

For example, it’s highly unlikely that Africa and South America can shut down for a couple months and simply issue debt to keep things moving along. So, it’s hard to say how COVID-19 will impact these economies when many are effectively forced to let the virus run its course.

The situation does not appear to be much better in Europe and Asia. The developed economies in these regions have been trying for years/decades to revive their economies using ineffective monetary policies. Adding even more stimulus while keeping borders and businesses closed could do little more than spray gasoline on a flame that was lit long ago.

Every time we get behind the wheel of a car, we risk permanent injury and even death. To mitigate this risk, we wear seat belts, drive slower in bad weather, etc. Caution won’t completely eliminate the risk, but we learned to live with this risk long ago because we had to.

COVID-19 is still pretty new and scary, but it does seem like we are slowly learning to live with this risk. Since the depths of the panic in March, gasoline consumption, air travel, restaurant bookings, and several other indicators of recent economic activity have surged higher (albeit from a low base). Perhaps a mask is analogous to a seat belt for some, while others can no longer take the cabin fever from stay-at-home orders and want their freedom back.

In any event, this recovery should continue as long as the government doesn’t derail everything by shutting the entire country down again. But this risk appears to be extremely low. Touch a hot stove once and you learn your lesson. The damage inflicted from forcing companies to close and keeping people locked up at home with nothing to do has been a harsh lesson for politicians and other leaders.

The government also has a history of overreacting and then correcting. The financial crisis is a prime example. Years of lax regulation got replaced with so much regulation that banks were practically restricted from earning any profit. Over time, rules were loosened but not removed.

The same appears to be happening now. The draconian decisions made in March and April are being modified in most instances. Even states that are reversing plans to reopen appear to be aiming for something less than total shutdown.

That being said, the world has changed, and it’s imperative that investors accept this reality. There are five key themes that we feel summarize the impact of these changes and will likely drive our investment strategy in the second half of 2020 and beyond:

These are inextricably linked and warrant a deeper dive to understand how each presents opportunity and/or poses risk. Over the coming weeks, we will examine each in greater detail.

The bottom line is that the first six months of 2020 will no doubt be remembered as one of the most tumultuous periods in history. But our country has endured far worse, so do your best to stay sane because a recover appears to be underway.