Should We Be Scared?

The first half of 2022 was one of the worst starts to a year. Record inflation, rising interest rates, and meteoric valuations took the wind out of the sails of financial markets. The fear and panic that has ensued has caught most investors off guard, and the debate surrounding whether or not the U.S. is already in a recession is well underway.

Perhaps that’s why the internet is flooded with charts like the ones below (these were found on Twitter). The first is the S&P 500 since April 2019 (red line) compared to the dot-com bubble from June 1997 to June 2003 (grey line), and the second is a similar comparison to the 2008 recession. The red and purple lines appear to be tracking the last two major recessions in lockstep and suggest that history could repeat itself. 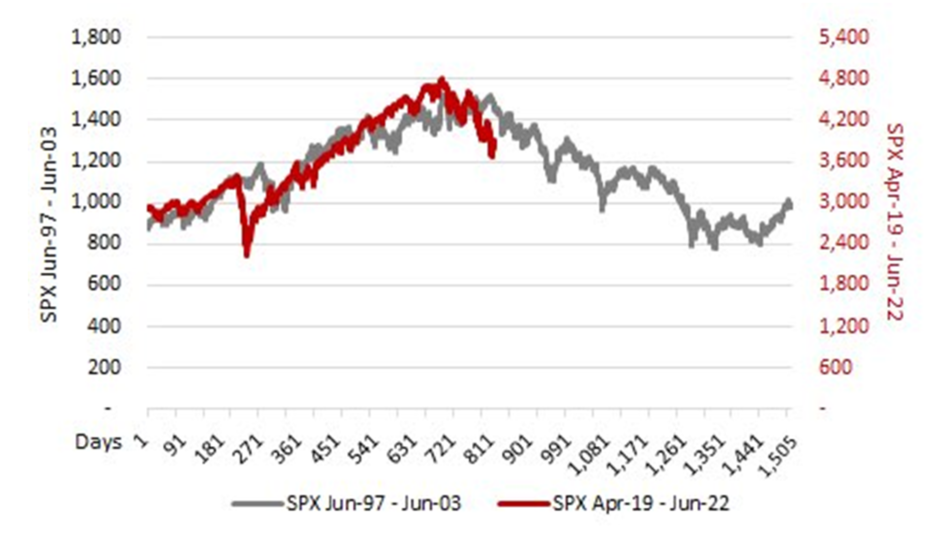 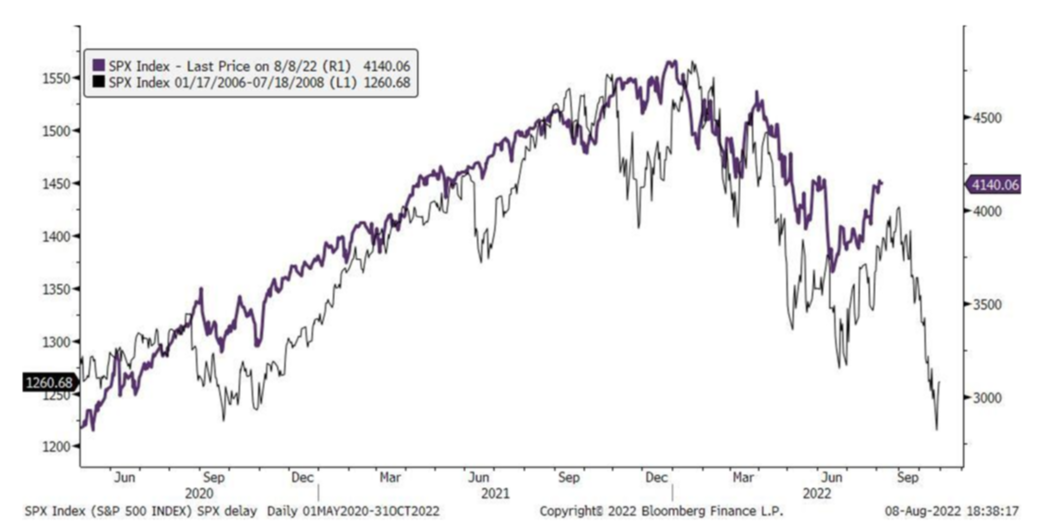 Should we be scared? The short answer is no. Charts like these offer zero insight. Just look at the difference between the vertical scales. The right side represents the index level today, and the left is 2001 for the top chart and 2008 for the bottom chart. It’s apples and oranges.

It’s also a different world today influenced by economic drivers that didn’t even exist in the past. Back in 2001, the tech sector was comprised of companies that had billion-dollar valuations with close to no revenue. Today, tech is dominated by gigantic cash machines that enjoy monopoly profits and have fortress balance sheets. Tech is also globally diversified, attracts the best talent, and is driving much of the innovation that’s shaping the world.

The same goes for the Global Financial Crisis in 2008. That was a near collapse of the financial system due to a shaky banking sector, massive leverage, and a clinically insane accounting rule. Today, consumers and businesses have more income, less debt burden, and higher savings than in prior cycles. Banks have never been this capitalized in history. It’s not even close.

But those who publish charts like these don’t care about any of that. They’re more interested in fooling readers into thinking that they’ve unearthed an alarming pattern. One that brilliant investors who collectively manage trillions in assets with access to the best data and statistical software on the planet have somehow missed.

That’s evident in their unwillingness to distinguish between correlation and causation. The former measures the degree to which two securities move in relation to each other (easy to do), but the latter implies that the underlying drivers of both are interrelated (not easy to do).

The chart below is just one example of the dangers of observing correlation while ignoring causation. Upon first glance, there is an incredibly strong relationship between the divorce rate in Maine and the per capita consumption of margarine during the 2000s. In fact, the correlation is so high that it’s almost “perfectly correlated” at 99.26%. But are we to believe that either nationwide margarine consumption was a leading cause of divorces just in Maine, or that divorces in Maine drove nationwide margarine consumption for an entire decade?  Or is it more likely that this correlation is spurious?

Herein lies the risk with using stock charts that compare one data series to another. There is simply no way to know if the drivers of each are somehow related without conducting deeper analysis.

Let’s assume for a moment that these charts were constructed in a way that attempted to discover real relationships. Basic stuff like normalizing the data (% change) to use only one vertical axis. Even so, there’s still a few hurdles to overcome before any value can be ascertained.

The first is so big that the Securities and Exchange Commission (SEC) has a very strict rule about it. It’s SEC Rule 156 and requires funds to tell investors not to base their expectations of future results on past performance before they invest. That’s why every registered investment product in the U.S. has this warning label stamped prominently on the cover:

“Past performance is no guarantee of future results.”

The next hurdle is time horizon. These charts’ omens are measured in months, which is an infinitesimally small window to analyze one of the most powerful wealth creating machines every conceived. Those who stood their ground in 2001 and 2008 were rewarded with one of the greatest bull markets ever. Taking either of these charts too seriously could risk throwing the baby out with the bathwater.

Lastly, the S&P 500 is by no means a proxy for a well-constructed financial plan. It’s just a concentrated index of large cap stocks in the U.S. In fact, only five technology companies (Apple, Amazon, Google, Tesla, and Microsoft) make up more than 23% of the index2. Even if these charts were somehow predictive, the only investors that should worry are those who lack the diversification to protect against them.

The bottom line is that stock charts are a lot like clouds. Stare at them long enough and whatever you’re hoping to see will likely emerge. But don’t ever forget that they’re mostly just a window into the past, so proceed with extreme skepticism when pundits attempt to use them to prophecize the future.