Blaise Pascal was a brilliant seventeenth century mathematician and philosopher. He was also a devout Catholic and devised a compelling argument for why one should believe in God. His case was predicated on the notion that while it's impossible to prove whether or not God exists, people should believe in God anyway. Here’s why.

Said another way, determining whether or not God exists is pointless because risking an infinite loss (an eternity in hell) for just a few years of sins and sleeping in on Sundays is not logical. The cost of being wrong is just too high. Hence, we should all just believe in God.Pascal conducted a cost-benefit analysis. If God exists, no matter what the costs are of believing when alive, they are always outweighed by the benefits of heaven. Similarly, no matter how large the benefits to atheism, if God does exist, those benefits are dwarfed by the infinite cost of hell.

This analysis became known as “Pascal’s Wager,” and it’s a framework that can be used in all facets of life where one must weigh potential outcomes from a decision. For example, let’s assume that after several decades of saving and investing you have accumulated enough wealth to retire comfortably. This creates a dilemma – either keep trying to grow the nest egg in risky investments or shift to safer ones that attempt to preserve capital.

Pascal’s Wager forces one to consider the consequences of any decision before accepting the risks involved by questioning which belief, if wrong, results in the worst outcome. Let’s set up the wager as follows: 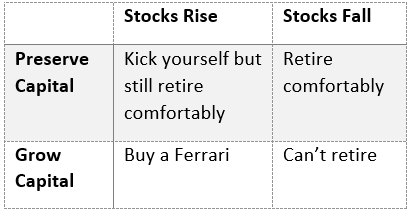 Another reason why Pascal’s wager is useful is because it effectively ignores “the odds.” There could be a 95% chance that markets go up, and it wouldn’t matter to Pascal. The whole point is that some risks, such as infinite losses for finite gains, are not worth taking. But don’t just take Pascal’s word for it. Warren Buffet also famously once said1:The two scenarios where an investor could be “wrong” are preserving capital in a rising equity market and owning risky assets in a falling market. Of the two, the worst outcome by far is losing the ability to retire. Any investor faced with this dilemma must decide if a bigger nest egg is worth the risk of not being able to retire on time.

Speaking of Buffett, he and Charlie Munger had a third partner many decades ago. His name was Rick Guerin, and according to Buffet, Rick was just as smart as he and Charlie. The difference was that Rick was in a hurry to become rich, so he invested heavily into the stock market using borrowed money (margin lending).

In the market downturn of the early 1970s, Guerin faced margin calls and was forced to sell all of his Berkshire Hathaway stock to Buffett at $40 per share to get money to pay back his debt2. Today, a single share of Berkshire trades for over $434,0003.

Carl Richards is a well-regarded financial author and columnist who once said4:

“Risk is what’s left over AFTER you think you’ve thought of everything.”

I can’t think of a better way to describe risk. There are times when it doesn’t matter how smart you are or how well you’ve calculated the odds of success. Mr. Guerin was going to be incredibly rich. He had to know that. His mistake was trying to speed up the process and inadvertently exposed himself to near immeasurable, but more importantly, unnecessary risk. Sure, the odds of the stock market falling over 70% and triggering those margin calls were statistically low, but it happened.

Lastly, don’t forget that when the unexpected happens, pointing to probabilities after the fact does nothing to change the outcome. Telling yourself that the odds were in your favor after a catastrophic loss provides no value or solace. It won’t change the fact that your life may never be the same again. So, keep this in mind the next time the urge to bet the farm, trade on margin, short stocks, sell unhedged options contracts, or do anything else that may expose you to life-altering risk for non-life altering returns.

The bottom line is that prudent investors don’t take more risk than they have the ability, willingness and/ or need to take. Nor should you.