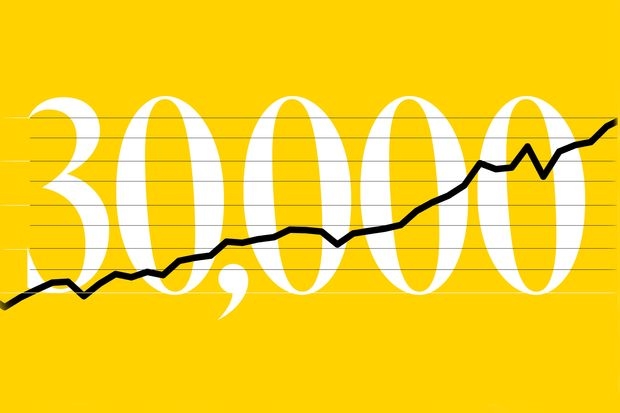 Google provides a service called Trends1, which graphically displays the popularity of a search phrase over time. The chart below is a trend report on “Dow 30,000” and the blue dotted line indicates that recent search interest has exploded.

The "Dow" refers to the Dow Jones Industrial Average, which is an equity index that tracks 30 large publicly traded stocks. It is one of the most closely followed indices and has been a proxy for the entire U.S. stock market since its inception in 1896.

The current bull market that began months ago has pushed the Dow to the precipice of cracking 30,000. If it were to cross this threshold, not only would it be another all-time high, it would represent a symbolic achievement during a tumultuous year that will most likely never be forgotten.

Public interest in major milestones is not a new phenomenon. The charts below show a similar spike in interest right around the time the Dow crossed 25,000 and 20,000 respectively. These milestones are lauded as historic events, but once the celebration ends, investors are invariably left with one question. What’s next?

This is when the pundits take their cue. Some prophesize that crossing major milestones is a harbinger to greedy investors. Take profits before it’s too late!

No greater cautionary tale can be cited than the months after the Dow broke 2,000. Back in 1987, the Dow began the year at 1,896 and then staged one of the most impressive runs in history, surging nearly 44% to 2,722 in late August. Days later, it reversed and dropped nearly 1,000 points in two months. The selling fury plateaued with a 23% crash on October 19th, which lives in infamy as “Black Monday.”

Others see breaching major milestones as validation of today’s market and the foundation for future opportunity. They claim that crossing them only adds fuel to the engine of growth. It’s a psychological level that will ignite even more confidence in a market that wants to go higher. They like to use fancy charts that show “support” lines and other technical indicators that attempt to justify their bullish stance. Momentum will rule the day!

Once again, we are faced with opposing opinions that make equally compelling cases. What is an investor to do?

My wife threw me a surprise 40th birthday party with close friends and family who flew in from all over the country to celebrate. The night was incredible and will always be a cherished memory.

We celebrate big birthdays because they represent milestones in life that society has designated to be important. The same applies to the Dow, and investors should most certainly celebrate the Dow hitting 30,000 if/when it happens because it signifies that the world’s greatest economy has thrived over the past century in ways that few civilizations have ever experienced.

However, both my age and the Dow index level are just numbers. I did not wake up on my 40th any smarter, more confident, or wealthier. Aside from my amazing party, it was not much different than any other day that week.

The same goes for the Dow. It’s not like breaking 30,000 will elevate the entrepreneurship and innovation driving the U.S. economy. Nor will it speed up the economic recovery or the distribution of the vaccine. Again, it’s just a number.

All-time highs aren’t even that rare of an event. Since 1900, there have been 1,327 trading days when the Dow closed at an all-time high1. That averages out to be 11 per year (1,327 / 120 years = 11). That’s one for every month of the year except December. Why would the 1,328th all-time high be special? What could it possibly suggest that the ones before it could not?

Let’s dig deeper by analyzing the chart below. The purple bars represent the total number of trading days when the Dow closed at an all-time high for every year going back to 1900. There have been several years when all-time highs were so common that they could have been a monthly or even weekly occurrence. 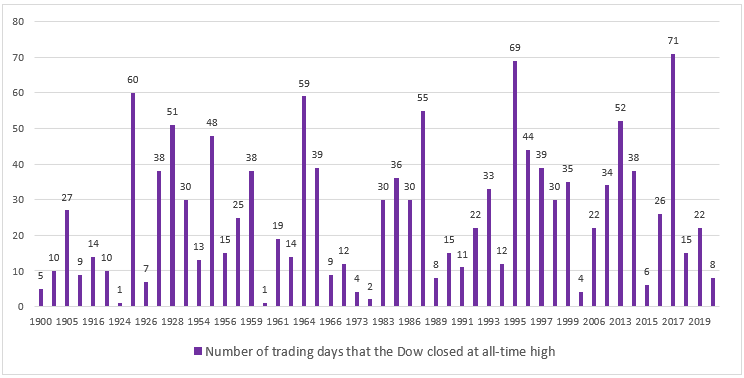 At some point, the Dow 30,000 story will likely be as much of a distant memory as the Dow 25K, Dow 20K, Dow 15K, and all others before it. Ironically, the media will be the first to have moved on because these stories become stale fast. They will put it up on the shelf until the day when the Dow begins to see 35,000 on the horizon. Then, take a wild guess what they will do.

The bottom line is that just because pundits apply meaning to numbers does not oblige these numbers to have meaning. The Dow breaking 30,000 is no different than a big birthday or your car odometer breaking 100,000 miles. Therefore, it’s best to just celebrate if/when it happens and avoid the temptation to search for a deeper meaning.

This material has been prepared for informational purposes only and should not be construed as a solicitation to effect, or attempt to effect, either transactions in securities or the rendering of personalized investment advice. This material is not intended to provide, and should not be relied on for tax, legal, investment, accounting, or other financial advice. Jay Street does not provide tax, legal, investment, or accounting advice. You should consult your own tax, legal, financial, and accounting advisors before engaging in any transaction. Asset allocation and diversification do not guarantee a profit or protect against a loss. All references to potential future developments or outcomes are strictly the views and opinions of Jay Street and in no way promise, guarantee, or seek to predict with any certainty what may or may not occur in various economies and investment markets. Past performance is not necessarily indicative of future performance.