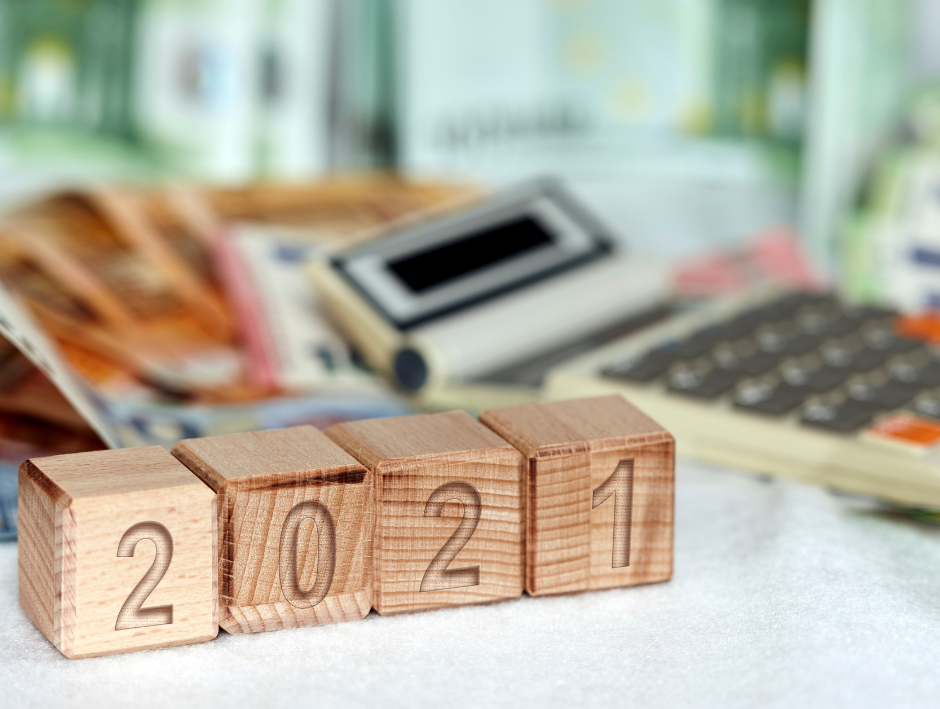 State of The Markets

Democrats are close to winning the narrowest possible control of the Senate, which would afford President Biden a wider avenue for his campaign agenda. However, even if the Democrats take both seats in the Georgia runoffs, Senatorial procedures will still pose limits to what might get done.

Most legislation will still need support from Republicans because Democrats require 60 votes in the Senate to avoid filibuster. This will significantly limit regulatory changes unless they can be tied to the budget. Most fiscal measures can pass with a simple majority using the “budget reconciliation” process, and Biden has two chances to use it this year. But that’s also not going to be easy for three reasons.

First, all it takes is one or two moderate Democrats to balk at any progressive initiative for it to die on the vine. Second, Democrats may hesitate to raise taxes this year because of the timing. The U.S. just emerged from one of the worst recessions in history, and politicians up for re-election in 2022 may think twice about risking their job until the country is back on its feet. Third, so far Biden has picked mostly moderate Democrats to fill his cabinet, and this could be evidence that his agenda is trending more towards the center.

But there will be changes. Income taxes on earners making more than $400,000 will likely go back to 39% (from 37.5% today). The State and Local Tax (SALT) deduction could rise (although this is a tax cut rather than a tax hike). Corporate taxes will probably go up to 28% (from 21% today). If not this year, then most likely next.

The biggest policy initiatives will be with spending. Biden recently announced a new $1.9 trillion stimulus package, and there is likely more to come. Stimulus tends to boost economic growth quickly and offer a pretty strong return on political capital, whereas headwinds like taxes and regulation often take years to impact the economy. This asymmetry could benefit those investors willing to ignore any side effects to such massive spending. For example, debt will grow as the deficit expands even further, but those are issues for many decades from now. Since no investment playbook can look that far down the road, any attempt to do so could ironically create more risk to meeting financial goals.

Simply put, most major policy initiatives fail during implementation because of all the moving parts and incentives driving those individuals making the decisions1. It’s unlikely that this time will be any different, which is why this “blue wave” may end up feeling more like a “blue ripple.” 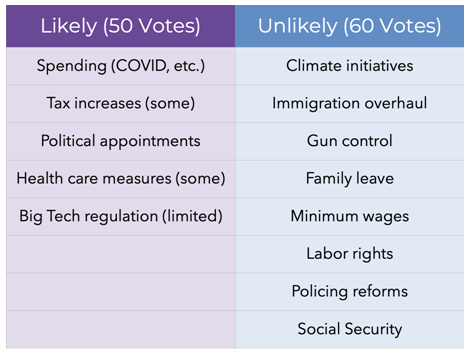 Almost 70% of U.S. economic activity comes from consumer spending, and one way to forecast spending is to assess both the ability and willingness of consumers to part with their money. Let’s first assess the ability to spend by analyzing the three main buckets of household finances – income, debt, and savings.

Debt affordability has also never been better. While some stimulus checks were used to buy iPads and PlayStations, others were used to pay down debt. Credit card balances fell by over $100 billion, or 10%, in 2020, which is the largest annual number ever recorded3. Mortgage payments are at a generational low of 4%, and although student debt and auto loans continue to rise, they are doing so at the slowest rate in a decade3. In fact, total monthly debt payments as a share of income are now the lowest they’ve been in over 40 years3.

Consumers have also been saving at record rates. During the quarter century prior to 2020, the savings rate averaged around 7% annually3. Last April, it soared to 34% (the highest ever recorded) because there was nowhere to go and nothing to do. It’s fallen since then to just over 13%, but that’s still a 50-year high ex-COVID3. Households have $1 trillion more in checking accounts today than they did a year ago2.

As an investor, the sheer magnitude of these numbers is hard to process. What’s even more striking is the fact that this happened during a time when the unemployment rate reached a level not seen since the Great Depression and 61% of consumers feared running out of money4. Even with these very serious issues that remain unsolved, the American consumer in aggregate is in the best financial shape in modern history.

But that doesn’t mean consumers want to consume, and the willingness to do so is going to remain depressed until herd immunity is achieved. This will probably take longer than anyone wants, but once it does, the U.S. could see a period of explosive growth similar to the 1920s (post Spanish Flu) and 1950s (post World War II).

Said another way, consumers are caged animals sitting on a few trillion to spend, and this mess will end eventually. The virus lost, we won, and investors should position themselves for what is to come.

The table below shows that asset class selection explains over 93% of long-term performance. Stock picking is somewhat additive, but without the asset allocation in place, it’s an uphill battle. Market timing is a waste of time.

It’s no different than those three sacred rules in real estate. Pick good locations and you’re probably going to do ok. One approach to finding good neighborhoods is to determine where we are in the business cycle (aka “the cycle”). Economies and financial markets are cyclical because human behavior fuels periods of fear and others of excess, and asset classes perform differently at each phase of the cycle.

The table below depicts the four phases of the cycle and which asset classes tend to perform the best relative to others. For example, during economic contractions, bonds and stocks tend to do better than cash and commodities (Phase 1). The red circle depicts the end of 2020, and it puts the U.S. somewhere between recovery and expansion based on the returns in each asset class. If so, equities could be poised for continued gains over the coming years as the economy progresses to expansion. 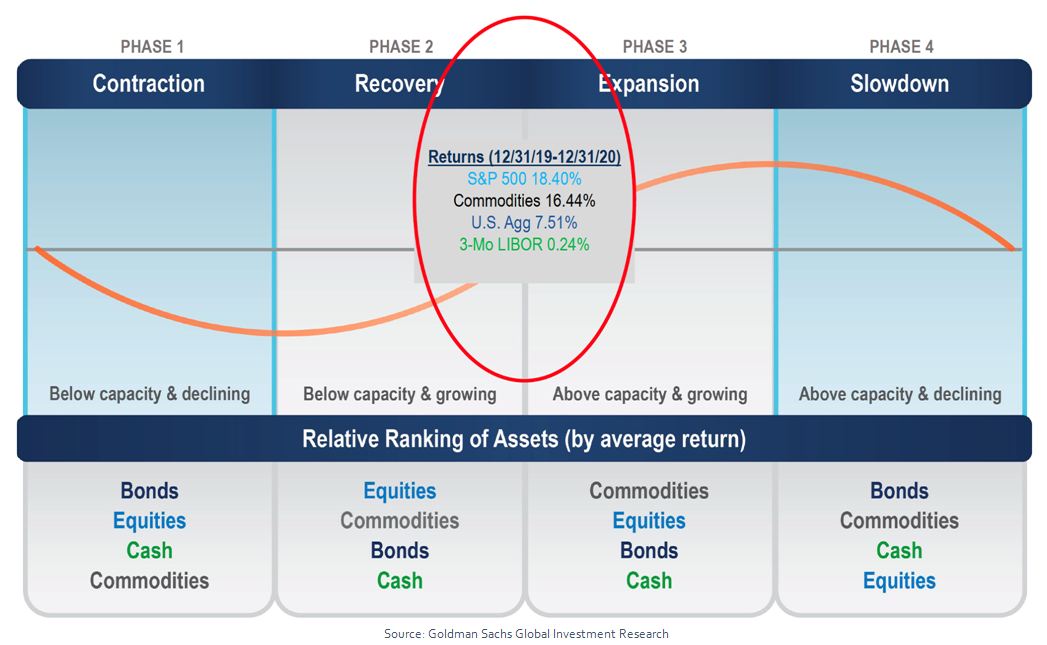 It’s not just the phase of the cycle that warrants attention to equities and to a lesser extent commodities. The Federal Reserve is showing no sign of raising interest rates anytime soon, which should support equity prices. Inflation is also percolating, and stocks can be an inflation hedge because many companies can raise their prices to preserve profitability. Furthermore, there aren’t many other options for investors seeking a “real” return (one that exceeds inflation) while preserving liquidity. As the saying goes, “There Is No Alternative” to stocks (TINA).

What’s good for stocks will likely pose challenges to bonds and cash investments. The chart below depicts a rather uninspiring outlook for bonds. Every sector in the bond market except Senior Loans is trading above “par,” or the issue price for a bond. When bond prices rise above par, they trade at a “premium.”

Bonds are loans. If a lender gives $100 to a borrower for two years, at the end of the loan, the lender is only going to get $100 back (plus interest). Meaning, bonds don’t mature at a premium, so this chart should serve as a warning to anyone with a laissez-faire attitude to fixed income. But the Fed isn’t going to allow a bloodbath to ensue either. It’s more likely that passive investors will endure death by 1,000 cuts as these bonds slowly mature back to par.

But selling all bonds could cause more problems than it solves. As the saying goes, a bad day in stocks is a bad year in bonds. Most investors own bonds for income and diversification, and just because broad sectors are trading at a premium does not imply the entire fixed income market is doomed. Instead, it suggests taking a more active approach using fewer constraints and finding managers skilled at navigating the risks that lie ahead.

Lastly, cash investments strike at the heart of the paradox. What is viewed as “safe” is actually quite risky to those investors worried about outliving their nest egg. For example, as of September 30th 2020, the average income earned on $100,000 in a savings account was roughly $2805. The income needed to beat medical inflation, which is a key concern for most retirees, was $4,9045. That’s over 17 times the amount of income currently offered. It’s likely this situation will only worsen over time, and those investors sitting in too much excess cash will continue to lose money safely.

A year ago, the notion of the government spending over a trillion dollars to stimulate the economy was unthinkable. Yet today, we have become so accustomed to stimulus packages with a “t” in them that they barely raise eyebrows anymore.

It’s almost impossible to contextualize numbers this large, but perhaps this example can help. If you had a job that paid $1 every second, you would earn $1 million by lunchtime on the 11th day, but it would take you 31,700 years to accumulate $1 trillion6. Prior to the CARES act back in March, numbers this big had been mostly reserved for astronomers to measure distances between stars. Today, they are the push of a button from the government.

Take this stimulus and combine it with bored consumers sitting at home aching to go out and do something fun, and an incredible amount of firepower could be unleashed on the economy. We just don’t know when, and we won’t have much clarity until progress is made towards herd immunity. Until then, trying to quantify this pent-up consumer demand is futile. Nothing like this has ever happened before, so any attempt would be lucky or wrong. But that’s ok. Investors only need to know is that it appears to be big.

But that doesn’t mean investing through this economic expansion will be easy or fun. These rides tend to be bumpy, and anyone that wants to jump onboard should accept the reality that it’s going to take a long time, and your nerves will be tested repeatedly along the way.

The bottom line is that we could very well be on the precipice of one of the greatest periods of economic growth in our nation’s history. But discipline prevents us from “backing up the truck” and going all in. We will continue to take a measured approach and attempt to focus more on the risk than the potential reward because we care more about helping you achieve your financial goals than beating benchmarks that are little more than marketing tools for large corporations. Thank you for your continued support, and Happy New Year!

This material has been prepared for informational purposes only and should not be construed as a solicitation to effect, or attempt to effect, either transactions in securities or the rendering of personalized investment advice. This material is not intended to provide, and should not be relied on for tax, legal, investment, accounting, or other financial advice. Richard W. Paul & Associates, LLC does not provide tax, legal, investment, or accounting advice. You should consult your own tax, legal, financial, and accounting advisors before engaging in any transaction. Asset allocation and diversification do not guarantee a profit or protect against a loss. All references to potential future developments or outcomes are strictly the views and opinions of Richard W. Paul & Associates, LLC and in no way promise, guarantee, or seek to predict with any certainty what may or may not occur in various economies and investment markets. Past performance is not necessarily indicative of future performance.