State of The Markets

Rewind the clock a year and pent-up demand to spend, months of government handouts, and the vaccine primed the U.S. economy to slingshot forward at speeds unseen in generations.

As it stands today, there are no more checks in the mail, and the Federal Reserve is accelerating its plan to raise interest rates from historic lows. It’s hard to say how markets will react as they ween off government intervention.

But spending is what matters over the long run, and the one thing Americans do better than most is spend. It’s more of a national pastime than baseball, and while the outlook for spending isn’t as strong as a year ago, it’s still quite good.

One year ago, we published the table below that hypothesized what could get done in D.C. after the Democrats swept the White House and Congress. Our counter-consensus stance was that the “blue wave” being reported in the news was more likely to be a “blue ripple” because of a handful of moderate democrats who appeared less supportive of progressive policy initiatives. 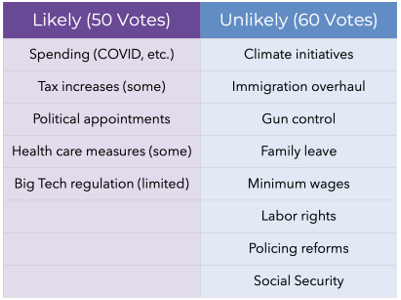 Since then, government spending and political appointments are pretty much all that has happened, and there’s a good chance that not much else gets done this year. Unless the Democrats were to eliminate the filibuster, everything listed in blue remain pipe dreams. In purple, Biden may get the chance to nominate a new Supreme Court judge. There’s also a good chance that Big Tech could fall in his administration’s crosshairs, but if so, it’ll likely just be for show and go nowhere (don’t bite the hand that feeds you).

The elephant remaining in the room is tax policy, and now that midterm elections are just eleven nauseating months away, the odds of tax hikes fall every day we get closer to the polls opening. Politicians typically avoid raising taxes during election years because they want to keep their jobs, and the same rationale might also apply to voting for trillions more in government spending in the face of the highest inflation rate in four decades.

Said another way, as little as we anticipated would get done a year ago, we expect even less going forward. If so, any political gridlock could become another pleasant tailwind for this bull market.

Almost 88% of U.S. economic activity comes from consumer spending (70%) and business spending (18%)1. It’s virtually impossible to find a data set right now that indicates that either cohort, in aggregate, plans to spend less this year. Beginning with consumers, the net worth of American households has surged from $110 trillion to $137 trillion in the last two years2.

Wealth creation like this is staggering, and it’s not just the rich getting richer. The table below shows that the bottom 50% saw the biggest percentage gain:

Furthermore, the power appears to have shifted back to employees for the first time in well over a decade. Workers are leaving jobs in record numbers (chart below), others are unionizing, and perks like working from home a few days each week are becoming necessary to attract talent. 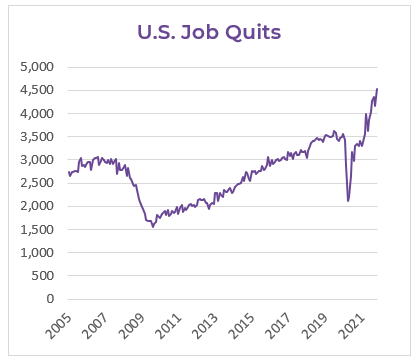 But just as it seems things couldn’t be better for the American consumer, it’s not how much you earn but rather how much you keep. And although politicians may not raise taxes this year, consumers are already facing something arguably much worse. Take the 6.8% annualized inflation rate3 and compare it to wage growth at 4.9%4, and workers are losing purchasing power (4.9% – 6.8% = -1.9%). Meaning, workers are winning the battle but losing the war unless they invest to protect against inflation.

Business spending should remain strong thanks to almost unlimited access to capital and insatiable demand from consumers for goods and services. This windfall has made the strong stronger and afforded the weak the chance to fix balance sheets. Perhaps that’s why 83% of midsize businesses and 71% of small businesses are optimistic about 2022 (up from 77% and 63% a year ago, respectively)9.

Simply put, the economy should continue to grow because spending will likely remain strong. But don’t expect a repeat of 2021 either. The government isn’t making it rain anymore, so the economy is going to have to grow the old fashion way – on its own.

It’s hard to summarize all that happened in the stock market last year, but the S&P 500 is a good place to start6:

“So we just had a year in which the S&P 500 hit a new record high in nearly one-third of all trading days, losses were capped at 5% and the index was up nearly 30%.”

Not too shabby, but those stats are for an index that holds 505 large cap stocks. It’s big and diversified. Dig deeper and the story changes quite a bit depending on which stocks investors owned. Many of the success stories from 2020 endured brutal reversals in 2021, and the pain is most likely not over for some.

The bond market had a bad year. Using Bloomberg U.S. Aggregate Bond Index (Agg) as a proxy, the index fell over 1.5% as inflation and the end of extraordinary monetary policy came on the horizon. Given the Fed’s intentions of raising rates 2-3 times this year, broad and passive exposure to bonds may continue to feel like death by 1,000 cuts. That’s why we remain tactical and unconstrained.

Gold’s reputation as an inflation hedge was put into flux as this shiny pet rock lost over 7% during a surge in inflation unseen since the 1970s. We’ve always been skeptical of gold because it doesn’t do anything (no revenue, cash flow, dividends, etc.) other than look pretty. It’s unlikely that our opinion will change anytime soon.

On the flip side, the SEC charged a top ten crypto coin for violating securities laws, and another was created as a parody of bitcoin. Keep that in mind before backing up the truck in cryptocurrencies. This market is maturing, but it is by no means mature.

Lastly, Bitcoin and Ethereum were legitimized last year (in the eyes of some) as assets worth owning for those who can stomach the volatility. The total market capitalization for cryptocurrencies tripled last year to a record $3 trillion8, and the table below depicts the performance of the top ten coins (for all the math geeks out there, notice the y-axis is logarithmic to show just how much money was made by those who got in early).

One of my biggest personal achievements of 2021 was teaching my four-year-old daughter how to ride a bike. Like most kids, she was apprehensive to get on that seat the first time, so to instill trust and eliminate the perceived risk of falling, I held on to her.

But eventually I had to let go, and when I did, she fell a few times before she figured out how to ride on her own. Her fear and frustration were the price she had to pay to go faster and have more fun than she ever could have had with me holding on.

That’s how I feel about the future for investors. For the past 20 months, the government has been holding on to mitigate the fear of falling, but now that’s all changing. The Fed is knee deep in rolling back a monetary policy that should have been eliminated over a year ago, and there are no more checks in the mail from Uncle Sam to boost consumer spending. Barring an act of God, this will be the year when we go back on our own, and it’s a little scary.

But there’s a limit to what we can achieve with the government holding on so tight, and despite the negativity portrayed in the media, there’s nothing quite like America. Quantum computing, clean energy, driverless cars, artificial intelligence, blockchain, breakthrough cancer drugs, individualized therapies, big data, mobile payments, genomics, cybersecurity, Internet of Things (IoT), vertical farming, space exploration, neuromorphic chips, and so much more world-changing innovation is happening right here. There simply isn’t a country on this planet that fosters entrepreneurship like we do, and that’s a big deal for U.S. based investors.

Personally, I’d much rather invest in an economy that is being fueled on innovation than one on government handouts and egregious manipulation of interest rates. Sure, the ride may be bumpier, and our resolve may be tested in ways that keep us up at night. But much like my daughter and her bike, we’ll never know how great we can become without the government letting go.

That being said, it’s important to set realistic expectations about the future so that we can position ourselves for success. Here are ten to keep in mind:

Print these out and hang a copy next to your television and another close to your computer screen. That way, if the S&P 500 isn’t up double digits by June, you’ll be reminded that it’s not supposed to be. They may also provide perspective if China invades Taiwan and/or Russia attacks Ukraine (recessions occur when consumers stop spending money, so it’s unlikely that either of these would cause Americans to somehow start pinching pennies).

These expectations also guide our playbook for the future, which is based on three overarching themes that we began implementing months ago. First, broaden diversification to manage volatility and the changing relationship between stocks and bonds. Second, utilize quantitative tools and other technologies to move quickly and decisively when opportunity presents itself. Third, stray from the herd and fish in ponds where others are less equipped.

The bottom line is that financial markets evolve over time, and the biggest risk to achieving financial goals is to refuse to adapt with them. Thank you for joining this evolution with us, and Happy New Year!