The Worst of The Worst

The chart below examines the performance of a balanced strategy of 60% stocks and 40% bonds after each major crisis over the last thirty-five years. For example, after the bankruptcy of Lehman Brothers and the depths of the financial crisis, this portfolio increased 4% (blue bar) one year later, 12% (yellow bar) three years later, and 47% (green bar) five years later. 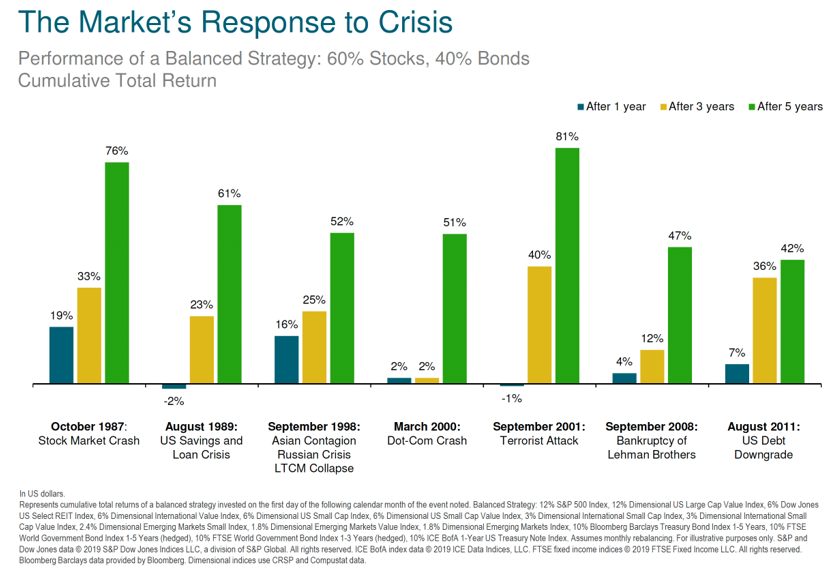 The average return after each crisis has been a respectable one-year 6.4%, three-year 24.4%, and a staggering five-year 58.6%. Said another way, the market’s response to a crisis has been quite favorable to investors who remained diversified and patient.

It’s safe to say that the government-mandated shutdown of the economy last year will get added to this chart. While the three and five-year numbers won’t be known for some time, we do know the one-year number, and it’s an impressive one.  Using March 2020 as the beginning of the shutdown, the one-year total return was 17.7%1. That’s almost three times larger than the one-year average of the other crises. Let’s cross our fingers and hope that the trend holds over the next four years.

For now, print this chart, spend some money on a nice-looking frame, and hang it on a wall right next to the television. Then make it the background image on whatever device you use most when reading market commentary online. That way, the next time fear and panic gets reported in the news, or some website tries to convince you that only gold and silver will survive the impeding financial Armageddon, refer to this chart and ask one question:

“Is this current crisis worse than anything on this chart?”

Let’s try this strategy out on a few of the panic attacks that appear to be percolating right now:

If we can agree that the answer to each of these is probably “no,” then it’s best to just tune out and ignore the punditry.

Going forward, use this chart as a point of reference. If the “panic du jour” seems less scary than what’s in this chart, then it’s likely that a diversified investment strategy will do just fine. For those rare instances when it seems worse, just remember that markets have recovered every single time from every major crisis thrown its way because the world just does not end all that often.

Lastly, it’s important to note why this balanced strategy weathered the turmoil. It had nothing to do with getting out of the market at the right time and then back in just as the madness subsided. The success came from preparation, not timing, by building a well-diversified portfolio designed to withstand turbulence yet still grow over time.

The bottom line is that you don’t need a crystal ball to keep you on track. Just good planning and a dash of perspective should be plenty to get you to your financial goals.