When Will This Game Stop?

On January 6th, shares of Signal Advance (ticker: SIGL) closed at $0.60. The next day, Elon Musk tweeted “Use Signal” to his loyal followers, and the stock closed at $3.76 for a jaw dropping gain of 627%.

There was just one issue. Signal Advance is a micro-cap biotech company, and Musk was referring to Signal, which is a messaging platform/app and even more amusingly, a nonprofit. Stories of traders confusing stock tickers make headlines a few times a year, but what made this one special is that even after the truth was discovered, the stock soared so high that it crossed $70 at one point. It’s come down since then but still trades above $5 (over 820% since January 4th).

Shares of GameStop, Blackberry, and AMC Entertainment exploded this week. These events prompted the media to run countless stories of everyday people getting rich overnight. There is much speculation into why this keeps happening and if it’s a precursor to an impeding bubble burst. But before we even attempt to answer these questions, let’s dig deeper into the mechanics of a stock price to better understand what is really driving these stocks and if it can last. 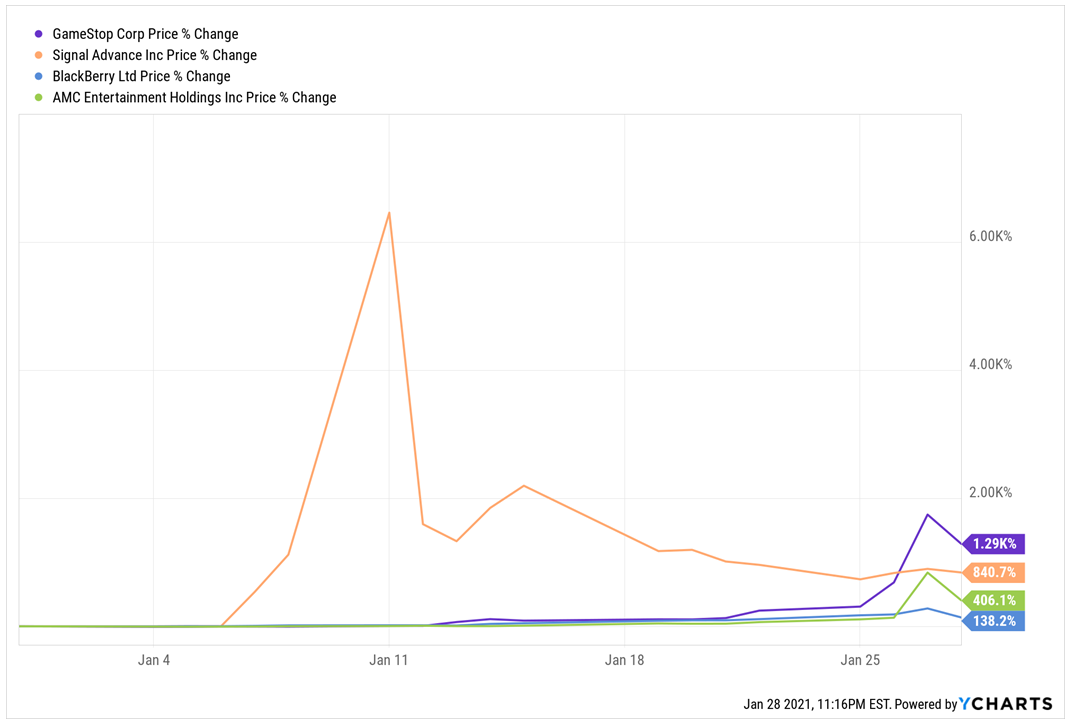 An asset price is the combination of some fundamental factor and the demand to own that factor, represented by its valuation:

For example, a house price is equal to the square footage (fundamental) multiplied by the price-per-square foot (valuation). Viewing asset prices in this manner allows us to compare one investment against another. If two houses with equivalent square footage are selling for $500/sqft and $750/sqft respectively, the more expensive home needs to justify its valuation or else it could be viewed as overpriced relative to the cheaper option.

Stock prices work the same way, and investors tend to value stocks based off of earnings (although sales and cash flow are other examples). Using the formula above, a stock price is equal to earnings multiplied by the price-to-earnings ratio. Stocks with similar earnings but different valuations require deeper analysis to better understand why the demand differs.

Prices move when the fundamental factor and/or its valuation changes. If a homeowner adds a second story, the square footage rises and should increase the price of the house (holding all other variables fixed). Furthermore, if demand to live in the neighborhood rises, the homeowner may benefit purely from the increased interest in the area.

Again, the same applies to stocks. Either a company can improve its fundamentals or demand for its stock can rise. Let’s assume that Company XYZ just announced the release of a new product. The excitement causes its stock price to rise from $100 to $125 right after the press release. Here, the earnings have not changed, but demand just rose by 25% because investors anticipate a boost to future earnings.

Fast forward a year, and XYZ reports record sales. Earnings rise by 20%, but the stock price doesn’t move because all that has happened is the expectations that were baked into the stock a year ago have now been met. If earnings rise by 20% and the stock price doesn’t change, that means the valuation has compressed, making the stock cheaper (and arguably less risky). Long term investors hope this process of increased expectations being met by the company will keep this cycle going.

Now, let’s assume that XYZ failed to meet expectations. The new product was a flop, and earnings are flat a year later. In this instance, XYZ looks overpriced because the fundamentals never caught up to justify the boost in demand from a year ago. This could cause the stock to take a big hit, and any investor that bought after the initial spike in price is at risk of losing money.

Both of these hypothetical scenarios happen a few thousand times every single day in the stock market. Investors anticipate some event in the future, and if those expectations are met, the stock usually maintains its price. When expectations are not met, the price usually falls.

There are also times when valuations move for reasons unrelated to fundamentals. Signal rose because traders misunderstood Musk’s tweet, while GameStop appears to be a massive “short squeeze.”

At the beginning of the year, GameStop was one of the most “shorted” stocks in the U.S. Investors short a stock when they want to bet that the stock price will fall, and it’s a risky strategy because of a stock’s asymmetric payout. When investors buy a stock, they can only lose what they put into the position. They also have unlimited upside since a stock can rise forever. The situation is reversed for short sellers. The upside is capped (stocks cannot fall below zero), but the downside is unlimited.

This asymmetry can occasionally fuel a short squeeze. This happens when a heavily shorted stock begins to rise. That’s not good for someone who is exposed to unlimited downside, and it can quickly ignite panic buying (the opposite of panic selling) as short sellers scramble to cover their positions. The ones who can’t get out first get squeezed as the stock soars higher.

Back in 2008, Volkswagen’s short squeeze was so massive that it briefly made them the most valuable company in the world1. During the financial crisis, the company encountered challenges that inspired shorts to pile into the stock. Porsche then began buying a larger stake in Volkswagen, which caused shorts to cover their positions (buy back the stock). This created a vicious cycle seen in the chart below. 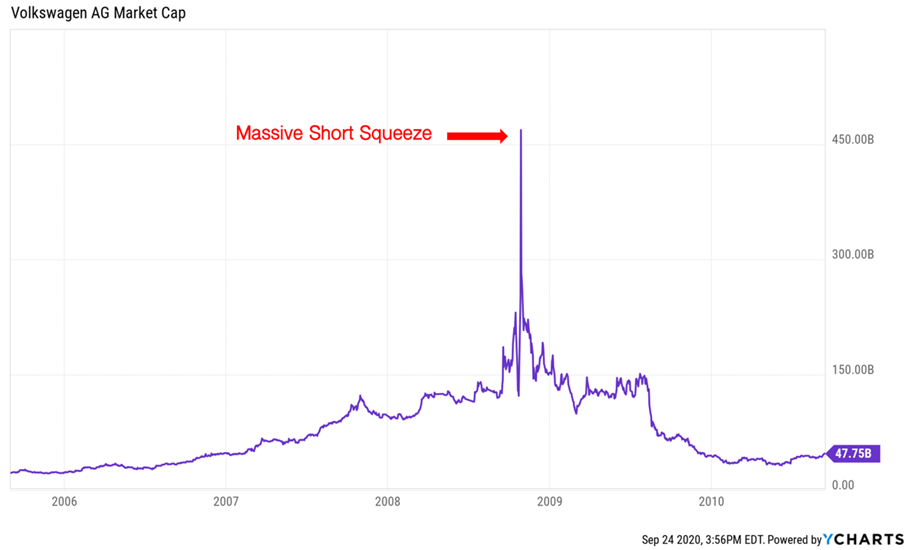 It’s not like Volkswagen invented a flying car that was going to change the world. If anything, its fundamentals were in bad shape and showing little signs of improvement. All that happened was a massive supply and demand imbalance that briefly caused the stock price to surge.

The same is happening to GameStop, and it’s hard to say when this is going to end. But it is going to end because a stock price cannot rise like this without the support from the fundamental side of the equation. Without it, the stock is a ticking time bomb.

More than one pundit has labeled this recent behavior as “crazy,” but given the events of the last year, I’d say it’s rather “consistent.” Don’t forget what has transpired. We’ve seen everything from laughable valuations of initial public offerings (IPOs) to Hertz doing a stock offering after declaring bankruptcy. Oil even traded negative back in March.

Several theories are floating around to explain why these stories seem to be more prevalent today than pre-COVID. It’s hard to say for sure, but what I do know is that I want nothing to do with them because they don’t involve the fundamentals. Hence, I’m unable to ascertain what could happen next with any degree of confidence. GameStop could hit $2,000 or $2 next week. Your guess is as good as mine.

But that doesn’t mean it’s inherently bad to want to join this party. Speculation is fine as long as it’s kept to no more than 5% of investible assets. Who knows, it may pay off. Just don’t go too wild and bet the farm on something that is almost certainly going to end like the Volkswagen chart above.

Lastly, ignore any fearmongering that this market activity is a precursor to a dot-com style bubble forming. This is not 2000. It’s not even close. Despite the media attention, they are isolated events that are microscopic when compared to the rest of what looks to be a relatively healthy and ambitious equity market.

The bottom line is that the only two possible outcomes from speculating are either being lucky or wrong. If you want to roll the dice, please do so only with what you are comfortable watching go to zero. It’s far better to feel a little FOMO when reading about people sitting at home making millions than losing your own home because you took on too much risk. But don’t take my word for it. The legendary J.P. Morgan said it best over a century ago:

1. High-profile short squeezes made this week a dramatic one.
2. Stocks often surge higher for reasons completely unrelated to the fundamentals.
3. There is nothing wrong with speculation as long as investors keep strict limits to how much gets invested.