Why Are They So Important?

“Timeo Danaos et Dona Ferentes” is a Latin phrase from Aeneid, written by Virgil between 29 and 19 BC, in reference to the Trojan Horse left behind as a subterfuge to help the Greek army take over Troy. Its literal meaning is “I fear the Greeks, even when they bear gifts.”

In many ways, this is how I feel the investing world views the Federal Reserve Bank (Fed). Anytime their policy decisions create a new bull market, it’s as if investors immediately begin talking about how long it will take the Fed to screw it all up.

Jerome Powell is the current Fed chair, and he’s up for re-election in February. Given the unprecedented policy decisions that have been made over the last 18 months, this could be one of the most important nominations in the history of our country. But before we dare to wager if he will keep his job, let’s first better understand how the Fed is structured and why it’s so important.

The graphic below depicts the Federal Reserve System. 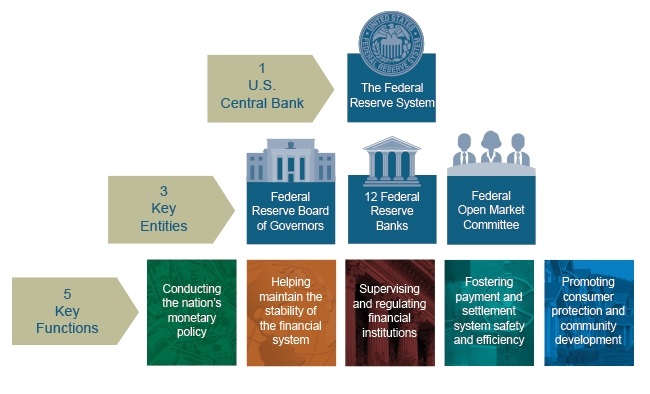 There are 12 districts defined in the U.S., each with a separate Reserve Bank. District boundaries were based on prevailing trade regions that existed in 1913 and related economic considerations, so they do not necessarily coincide with state lines (per the graphic below)1. 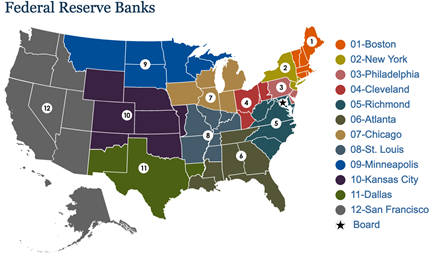 Think of a central bank as a bank for big banks. For example, Bank of America and J.P. Morgan are customers of the Federal Reserve in a similar way that we are customers to them. We use banks to deposit paychecks and take out loans to buy houses and cars, and these large banks rely upon the Fed for similar needs. Big banks use central banks to hold excess cash and take out loans periodically to help support their business.

The Fed has a dual mandate - control inflation and maximize employment. The combination of these two should theoretically produce manageable growth, where consumers make more and spend more without inflation going haywire. Their primary tool to achieve such harmony is through adjusting our access to money.

Right around 70% of the U.S. economy is fueled by consumer spending (add in business spending and the number jumps to 88%)2. Therefore, if consumers and businesses are spending money, the economy grows, and when they stop spending money, it shrinks.

Consider how most consumers buy expensive goods and assets. Rarely do we pay for homes, cars, and other big-ticket items in cash. Instead, we take out loans and then pay back these debts over time. Since big purchases are mostly done on credit, interest rates are the life and blood of the economy.

Meaning, if a mortgage rate rises from 4% to 10%, house sales will probably get hit because fewer consumers can afford to pay a higher interest rate on a large loan balance. Control interest rate levels and you control how fast/slow the economy can grow (in theory). If the Fed wants to slow down the economy to combat rising inflation, they increase interest rates. If they want to encourage economic growth, they lower interest rates.

The Fed’s ability to control our access to money by manipulating interest rates arguably makes them the most powerful economic force in our known universe. This is why every single movement, word spoken, and semi-colon written by the Fed is analyzed so closely.

These interest rate decisions are made by the Federal Open Market Committee (FOMC). This consists of all seven Governors from the Board, the President of the Federal Reserve Bank of New York, and four of the remaining eleven Reserve Bank presidents on a rotating one-year basis. All Bank Presidents attend FOMC meetings and join in the discussions, but only those currently on the FOMC have a vote.

Influencers of The Fed

There are three entities that are regarded as having the most influence over the Fed and monetary policy. The first is the Fed Chair, and while many believe that decisions are made solely by the Chair, it’s slightly more complicated. There is a consensus process led by the Chair, but there can be dissent and even the occasional uprising.

The second is Congress. They have the power to amend the Federal Reserve Act of 2013 to control the power of the Fed. This is why the Fed Chair must periodically testify to Congress. The legislative branch requires it as part of their oversight process.

The third is the President, and of the three, (s)he surprisingly carries the least amount of power to impact the Fed. The President appoints the Governors and leadership, but that is pretty much where it ends.

Even though the President has the least amount of power of the three, (s)he is arguably the most vulnerable to the policy decisions set by the Fed. As explained, the Fed has an enormous amount of influence over whether the economy grows or shrinks. The problem is that the President is a lot like the CEO of a large company. When something goes bad, no matter what the cause, the buck stops here.

The President is almost always credited for a strong economy and blamed for a bad one. Therefore, Fed policy matters a lot to first-term Presidents that want a second term come election time. That’s why pressure from the White House against the Fed is common. President Trump nominated Powell but then wanted to fire him two years later for not cutting interest rates fast enough10.

Lyndon Johnson wanted to fire the Fed Chair, William McChesney Martin, so badly that he got physical. In late 1965, the Fed raised short-term rates, alarmed by signs of inflation after tax cuts and with the war in Vietnam ramping up. President Johnson summoned Martin to his ranch, and according to Sebastian Mallaby, the author of a biography about former Fed Chairman Alan Greenspan, President Johnson “physically shoved [Martin] around the living room,” saying he didn’t care about the boys in Vietnam3.

The Nixon tapes reveal that President Nixon pressured Fed Chairman Arthur Burns to take easing actions ahead of the 1972 election. Although impossible to know for sure, many economists think Burns relented to the pressure6.

Former Fed Chairman Paul Volcker’s memoir revealed President Reagan’s chief of staff, James Baker, ordered him not to raise interest rates ahead of the 1984 election4. The drama even goes back to the 19th century. Andrew Jackson and Nicholas Biddle, president of the Bank of the United States, fought constantly (a period also known as the “Bank War”)5.

Simply put, the President has a lot riding on the Fed, but (s)he is virtually powerless to control monetary policy after nominations are confirmed.

PredictIt is an online betting site that allows gamblers to bet on a wide variety of outcomes such as who will win the Republican nomination in 2024, whether California’s governor will be recalled, etc. The site also offers odds on the next Fed chair, and the table below shows that as of August 12th, Powell is in the lead. 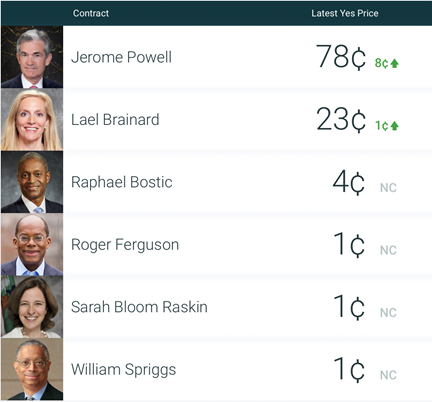 To be clear, I put zero faith and/or weight into betting sites like these. But the lineup portrays what is being reported in the news, and if I was a betting man, I’d also pick Powell for three reasons.

First, given the importance of a strong economy to the chances of re-election, Biden wants a Fed chair who is supportive of an expanding economy and driving unemployment lower. Powell has shown he has a clear desire to do just that. If Biden were to choose any of the other candidates, he risks bringing in someone new who is untested and/or may have a different agenda. As the saying goes, a bird in the hand is worth two in the bush.

Second, Powell is well-respected by both Democrats and Republicans8. Biden may want to keep some level of partisanship in place for future negotiations with the Republicans over other policy decisions. Picking Powell will most certainly be the least controversial move.

Third, Powell is the first Chair who is neither an economist nor an academic. He made a fortune in the private sector before working in government. This real-world experience almost certainly helped navigate our country through one of the worst economic contractions in history. In short, he’s done a pretty good job as Fed chair, and it’s hard to make a case that he’s unfit for the job.

But I learned long ago to never, under any circumstances, bet on the outcome of a government decision. Politics often deviate from logic, so who knows what will happen.

The bottom line is that the power of the Fed will continue to keep them squarely in the public eye. How they handle the coming years as we return to a more normal monetary policy will most likely have more impact on the economy than anything Biden or any other President could do. Therefore, don’t expect the focus on the Fed to wane anytime soon.