Don’t Concentrate Too Much

The risk of ignoring diversification is rarely worth the reward. One of the most infamous stories in modern history can remind us of the inherent dangers of concentrated positions in a portfolio.

This company paid huge bonuses to top producers, which were often in the form of company stock. Since the stock price surged over so many years, employees gleefully watched their net worth skyrocket, and many became multimillionaires well before their 30th birthday.

Newfound wealth understandably creates an emotional attachment to the investment responsible for such a life-changing event, and the bond between investors and this stock only strengthened over time due to three influential forces:

Given this backdrop, it’s hard to blame employees for refusing to sell a single share, and those who remained invested enjoyed the ride in the chart below. 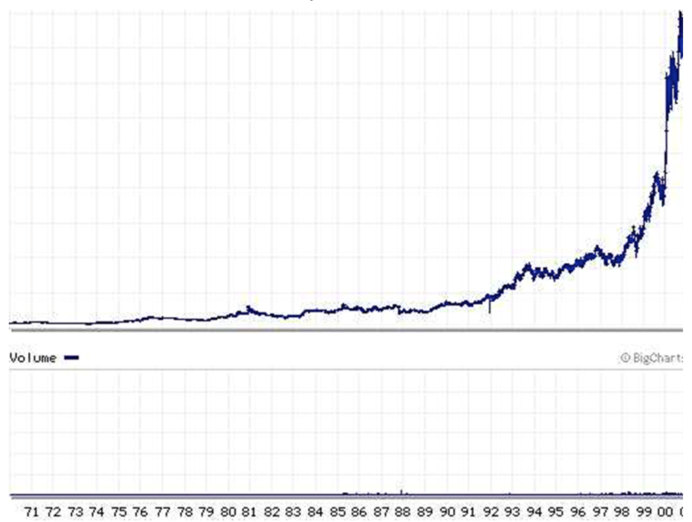 The stock rose so much that it soon represented the majority of the employees’ net worth. They became so addicted to the gains that they ignored the most basic principles of diversification.

Unfortunately, this company’s name was Enron, and the chart below illustrates how billions in wealth disappeared in weeks, as the world learned that management had been committing fraud. 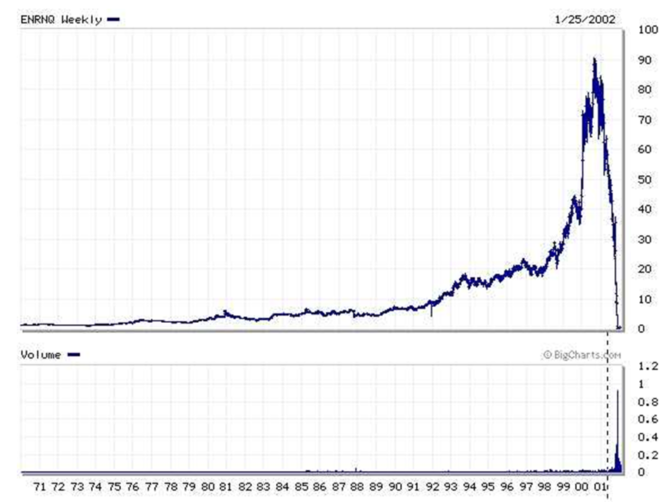 Still to this day, questions remain about how so many smart people lost so much money and why they did not see the fraud sooner. However, these are not the questions that people should have been asking.

Investors accumulate a concentrated holding for several reasons. A CEO may take her company public and then have a large amount of stock that she cannot legally sell. An individual investor could have purchased Apple’s stock at $3 and never sold shares. The list goes on and on.

These positions typically develop over time, and accumulating a concentrated holding is often a great problem to have in a portfolio. However, as relative size of this position grows, the risk can quickly outweigh any potential for future gain.

Those investors who watched their entire life savings disappear as Enron fell should not be faulted for failing to spot fraudulent activity. Fraud is extremely rare and often conducted by a small group of bad actors out of reach from most employees and regulators. But where they do bear responsibility is electing to put all their eggs into one basket.

No matter how much conviction one may have about an investment opportunity, diversification demands prudence. Investing to build net worth over time is a process of managing risk, not taking risk, and there is no conceivable situation where a concentrated holding is appropriate.

Each investor is unique, so it’s tough to generalize about where the concentration becomes too high. But I cannot think of a situation where a single investment should ever comprise more than 20% of an individual’s investable assets (excluding a primary residence).

Simply put, Enron investors may have lost their investment due to fraud, but their net worth vanished due to lack of diversification.

Stocks get handed down through generations, some make investors very wealthy in a short amount of time, and others represent an entrepreneur’s life achievement. In each of these scenarios, emotional attachments understandably develop toward a stock in the form of loyalty, pride, and gratitude.

However, mixing emotions into investing provides little upside, and any emotional link to a stock will be a one-way street. I have lost count to the number of times I have met a once wealthy investor who watched their net worth vanish because they could not bring themselves to break an emotional bond to an investment.

is forced to maintain a concentrated position. For example, executives are often required to hold stock for a minimum amount of time, while others fear that selling stock would lead outside investors to believe that prospects for the firm are dire. Fortunately, strategies exist for those who cannot sell but still want to mitigate the risk inherent in concentrated holdings.

The bottom line is that breaking up is hard to do, but investors who currently hold a large position in any one investment are strongly urged to speak with their financial advisor immediately about devising a plan to either divest or hedge this risk.