Take Two And Call In The Morning

Times like these test the patience and conviction of even the most disciplined investors. Here are five points that may help keep perspective and alleviate some of the pain.

The headlines around Gross Domestic Product (GDP), which is a measure of economic growth, are creating a confusing picture. Real GDP, or GDP after the impact of inflation, came in at -1.4%1, but that in no way implies a recession. Dig deeper and the story changes. Consumer spending increased by 2.7% (annualized), business fixed investment soared 9.2%, and home building rose by 2.1%. These are not recessionary numbers, so let’s dig deeper.

First, imports surged, and GDP doesn’t like that. The idea is that if Americans rely more on what the rest of the world sells than what is made here, then our economy should be penalized. However, actual spending is vastly more important than where goods originate from. Sure, buying American is better than not, but it’s tertiary.

Second, the data support our longstanding conclusion that American consumers are caged animals being released into the wild. For example, Live Nation reported that ticket sales were up 45% in February versus the same period in 2019 (pre-lockdown)2. Over two million people on average traveled by plane each day between April 17th and 23rd. That figure averaged about 2.4 million in 20192. The chart below shows that retail sales growth (aqua line) is tracking the highest in over three years. These and so many other data points are critical because 88% of our economy is spending. 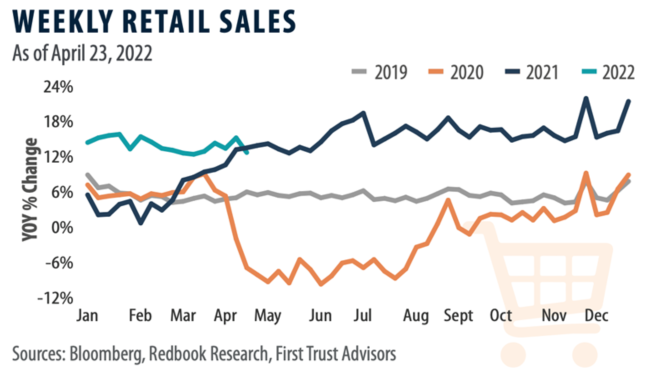 Third, inventories slowed down. Meaning, companies are buying less stuff to put on their shelves, which is arguably a good thing. Hoarding has been rampant since the lockdowns, and that’s not real demand. So, this slowdown seems more of a normalization than any indication of customer demand falling apart.

Headlines will warn that this has been the worst January to April period for the S&P 500 going back to 19393, but let’s try to provide some context using the chart below. Purple bars indicate the annual price return on the S&P 500, and red dots highlight the largest drawdown (peak-to-trough decline) each year. 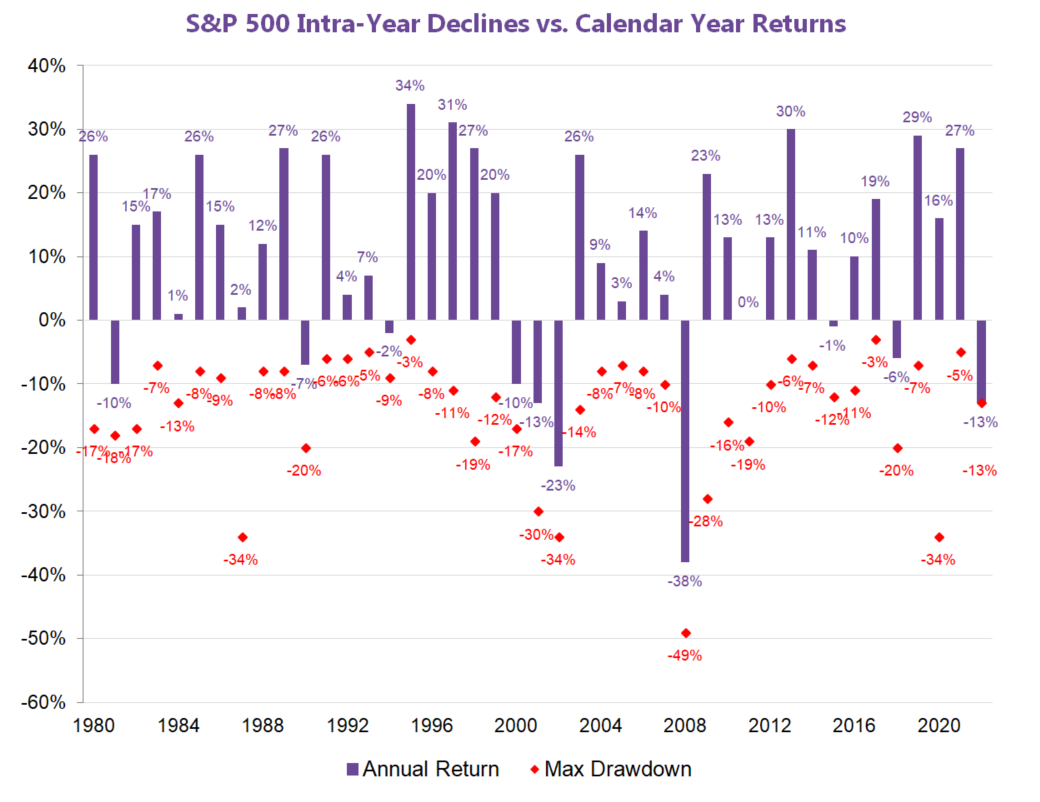 Three observations are worth noting:

While these observations may be unsettling, consider the following:

Meaning, most drawdowns were short-lived and had little to no lasting impact on the long-term direction of the index.

Paul Samuelson is one of the most well-respected economists in modern history, and he famously said:

He was referring to the fact that the S&P 500 has fallen before every recession going back to the formation of the index. But a recession hasn’t happened every time after the index has fallen because the stock market does not drive the economy.

It’s the other way around. Economic growth fuels corporate profits which then push stock prices higher. Today, earnings are growing comfortably, and profit margins remain at or close to all time highs. Meaning, more fuel is being put in the tank for stocks at the same time that prices have fallen. To me, that sounds like it could be an attractive setup for patient investors.

“The American Association of Individual Investors (AAII) conducts a weekly Investor Sentiment Survey to ascertain which direction AAII members feel the stock market will move in the subsequent six months. The mid-April survey had the fewest “bullish” responses since 1990. The survey conducted on 4/20/2022 reported a scarcity of bulls at only 18.90%. To put these results into perspective, recent surveys had fewer bulls than the 3/5/2009 survey (18.92% bullish responses), which was conducted a few days before the S&P 500 Index bottomed out on 3/9/2009.”

Wow! Fewer bulls today than days before the depths of the worst financial crisis since the Great Depression. That’s hard to conceptualize, but if that’s really the case, then the chart below suggests what could happen next. It shows that a lack of bulls tends to be followed by relatively strong performance for stocks over various time periods. If history is any guide, then this current 18% reading could suggest that contrarians, or those who go against current market trends, may prevail.

The data above is meant to act like Tylenol to help with minor aches and pains. For some investors, they may be all that’s needed to keep calm and focused.

However, if you’re feeling like your guts are getting ripped out, mild painkillers are not going to do the trick. I could show a thousand more data points, but that won’t help either. Everyone has a different risk tolerance, and while your advisor can help assess your ability to tolerate risk, only you know your willingness to do so. Often times, it takes times like these before you truly know where you stand.

The bottom line is that panic selling is one of the most effective ways to permanently alter a financial future because it converts short-term pain into long-term misery. If you feel that you are susceptible to panicking, call your financial advisor to discuss other options. We offer strategies that span the risk spectrum, so lowering the risk/volatility is often a quick adjustment.

The content displayed herein is for informational purposes only and should not be used or construed as investment advice or a recommendation to buy, sell, replace, or exchange any financial product or security. All expressions of opinion reflect the judgement of the authors as of the date of publication and are subject to change without notice. Certain of the content within this article may reference data from third-party sources who are not affiliated with the firm. The firm and the author cannot guarantee the accuracy or completeness from third-party sources or third-party content. Securities investing involves risk, including the potential for loss of principal. There is no guarantee that any investment plan or strategy will be successful. Additionally, the content within this article does not account for your particular investment objectives, risk tolerance, financial situation or needs. As such, the content displayed herein is not specific to you and may not be suitable for all investors. There is no assurance that any investment strategy, such as asset allocation or diversification, will achieve its objectives. Please note that rebalancing investments may cause investors to incur certain transaction costs and, when rebalancing a non-retirement account, taxable events will be created that may increase your tax liability. Rebalancing a portfolio cannot assure a profit or protect against a loss in any given market environment. Indices are not available for direct investment. Any investor who attempts to mimic the performance of an index will incur fees and expenses which will reduce returns.