Will Rising Rates Cause Stocks to Crash?

Consumer and business spending fuel most of the country’s economic growth, and since most major purchases are done on credit, interest rates are vital to the health of the economy. For example, if the interest rate on a car loan doubled from 4% to 8%, then fewer consumers will buy cars because the interest payment would eat up more of their monthly income.

High interest rates have historically led to recessions because they force consumers to spend less money. Now that we are months away from the first Fed rate hike in years, some investors fear that rising interest rates will ignite another recession.

But that’s not how it works. The Fed raises interest rates because the economy is growing. Strong economies tend to lead to strong corporate profits, and these profits are what fuel stock prices over the long run.

The table below depicts the performance of the S&P 500 over the next three, six, and twelve months after the first Fed interest rate hike going back to 1980. While the performance has been a coin toss in the near-term (50% of the next three months were positive), investors patient enough to stay invested for a full year were rewarded 100% of the time.

Stocks haven’t just done well early on. During periods of rising rates going back to 1960, the S&P 500 was positive 78% of these periods with an average return of 17.3%1. Furthermore, the average duration of a rising rate period was just over two years, and the longest was almost five years. Meaning, interest rates can rise for many years before becoming a problem.

But at some point, interest rates get too high and impact spending to the point where a recession becomes likely. Let’s try to find this line in the sand by analyzing the chart below. There’s a lot to digest, so let’s break it down. 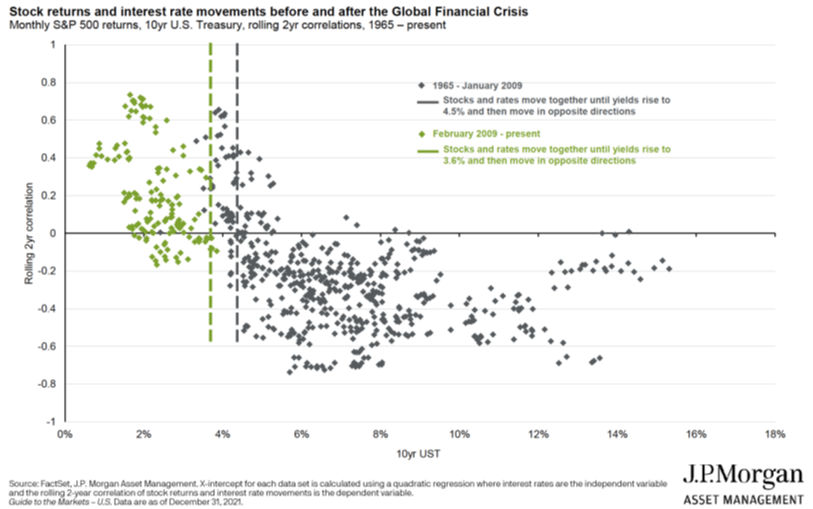 The horizontal axis is the 10-year Treasury yield, which is a critical long-term interest rate, and the vertical axis measures the relationship between the S&P 500 and interest rate movements.

A dot below the 0.0 level indicates a negative relationship between the S&P 500 and interest rate movements. For example, when interest rates have been at 10% and moved higher, the S&P 500 has fallen. At 10%, consumers are most likely not spending much already, and to move rates higher will choke off the economy even more. Less spending equates to lower profits and pressures stock prices.

A dot above the 0.0 level indicates a positive relationship between the S&P 500 and interest rate movements. For example, when interest rates are at 2% and move higher, the S&P 500 has historically risen.  At 2%, consumers are usually active because rates this low make spending more affordable. This point in the economic cycle tends to be very good for stocks because the economy is growing faster but not overheating to where the Fed feels they need to intervene.

Therefore, a rising interest rate, on its own, is not enough to estimate the future direction of stock prices. We must also consider the current interest rate level because this is a critical factor in determining the health of the economy.

In a low interest rate environment, like today, the green-dotted line at 3.6% indicates the threshold where an interest rate hike has gone from helping stocks to hurting them. Currently, the 10-year Treasury yield is around 1.79%, so this interest rate would need to double before we reach this line2.

But it’s not as easy as owning stocks until the 10-year Treasury yield hits 3.6% and then selling. This threshold is based on historical averages, and we’ve only been in a low-rate world since 2009, so there’s not a lot of data to support this 3.6% line.

There’s also nothing “normal” about the last two years. Sure, we’ve become accustomed to super low rates, which could move the line to the left, but there’s also trillions in excess savings right now3. That’s an enormous rainy-day fund for consumers that may very well keep us spending longer and move that line to the right.

Simply put, whether today’s line is to the left or right of the green line is a mystery, but for now, this chart implies that we probably have some time before higher rates impact spending too much.

I travel regularly, so I spend a lot of nights in hotels. One thing I have learned during my time on the road is that hot water in most hotels can melt aluminum. Therefore, every time I shower in a hotel, I follow an iterative process to ensure I don’t end up in the hospital. I turn the hot water knob ever so slightly, checking the temperature along the way before moving it higher.

The Fed follows a similar process when raising rates. They know that if they ramp up interest rates too far too fast, the economy can get scalded. That’s why they’ll likely start raising rates slowly later this year, but their job is a lot harder than finding the optimal temperature to shower.

When I turn the dial, I get near immediate feedback, so I know exactly when to stop. The U.S. economy is too large and has too many moving parts for anything to be immediate, so a change to interest rates, no matter how big or small, can take up to a year to feel the effects.

This lack of timely feedback is precisely why the Fed overshoots and recessions often happen later in the cycle. There’s a good chance this happens again but unlikely anytime soon. Planning today for a risk that could take years to develop is in itself risky because being too early is often the same as being wrong.

The bottom line is that stocks have experienced attractive gains in the early innings of rising interest rate cycles. There’s little evidence to suggest that this time will be any different.